Samsung 360 Round Camera With 17 Lenses Launched, Focused on VR Content 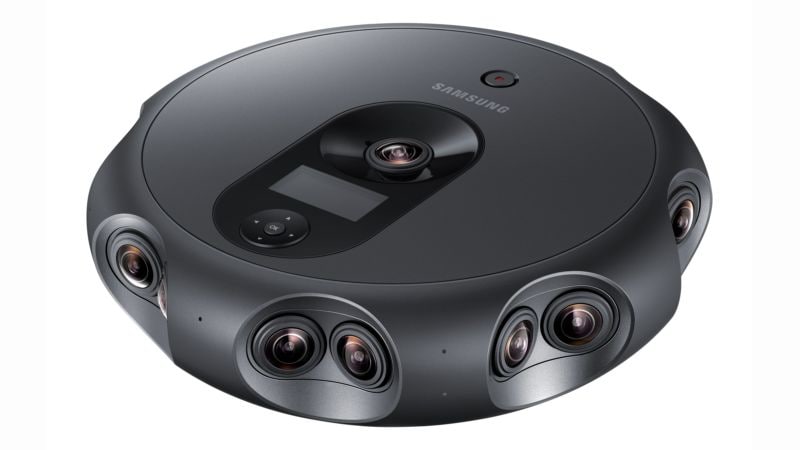 Samsung at its Developer Conference (SDC2017) unveiled the all-new 360 Round, a camera targeted at creating high-quality 3D content. This isn't Samsung's first attempt at 360-degree camera as the company previously announced the Gear 360 long back. The new Samsung 360 Round, however, is completely focused at creating virtual reality content, and not just streaming 360-degree videos.

The Samsung 360 Round camera uses 17 lenses which are placed in an arrangement of eight stereo pairs positioned horizontally and one single lens positioned vertically-to livestream 4K 3D video and spatial audio. Making the new 360-degree camera slightly durable is the IP65 water and dust resistance. The 360 Round sports a fanless design that helps in reducing weight and eliminates background noise. Samsung also ships additional features including PC software for controlling and stitching videos. It comes with expandable external storage support up to 256GB via SD card and up to 2TB via SSD. For post processing, it supports Windows 10 machines and a PC with at least Intel Core i7 or above and Nvidia GeForce GTX 1080 GPU.

There's no pricing announced though CNET reports that the 360 Round comes with a hefty $10,500 price tag. The Samsung 360 Round will be made available in October in the US before expanding to other markets over time.

Announcing the new 360 Round, Suk-Jea Hahn, Executive Vice President of Samsung Electronics' Global Mobile B2B Team said, "The Samsung 360 Round is a testament to our leadership in the VR market. We have developed a product that contains innovative VR features, allowing video producers and broadcast professionals to easily produce high quality 3D content. The combination of livestreaming capabilities, IP65 water and dust resistance and 17 lenses makes this camera ideal for a broad range of use cases our customers' want-from live-streaming major events to filming at training facilities across various industries."