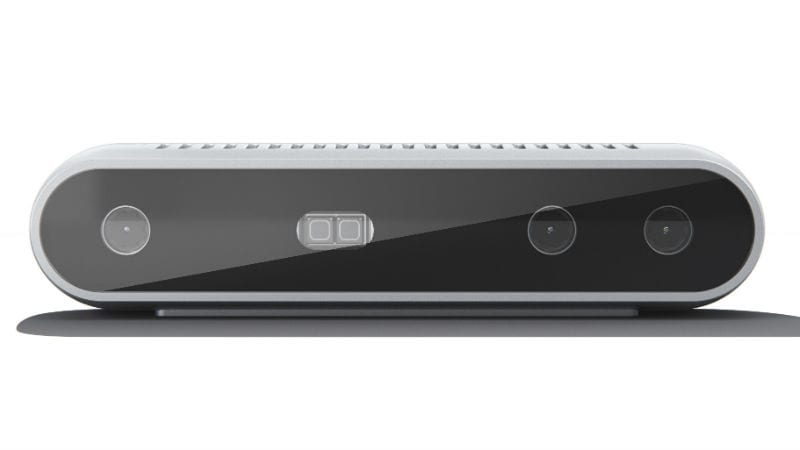 Intel has launched two new D400-series 3D RealSense cameras. The D415 and D435 cameras were unveiled at CES 2018. Intel says the cameras can add 3D capabilities to any device. They come with a USB-powered form factor and can process complex depth data in real time because of a D400 depth module, a turnkey optical depth solution, and the new Intel RealSense vision processor. The cameras can also be used both indoors and outdoors and in any lighting environment, Intel claims. In terms of pricing, the D415 is available for $149 (roughly Rs. 9,500), while the D435 costs $179 (roughly Rs. 11,400).

The D415 and D435 depth cameras come with Intel's RealSense SDK 2.0, which is now a cross-platform, open source SDK. Intel explains the technology as,"RealSense Stereo Depth Technology brings 3D to devices and machines that only see 2D today." According to Intel, the target audience for the camera are not just developers and manufacturers, but also makers and educators. It says the cameras are easy to use and works as soon as they are plugged in. Meanwhile, the company says that the new cameras add human-like 3D vision to devices. Intel RealSense VP Sagi Ben Moshe, in a statement, said, "Many of today's machines and devices use 2D image recognition-based computer vision, but with Intel RealSense's best-in-class depth technology, we are redefining future technologies to 'see' like a human, so devices and machines can truly enrich people's lives."

While both the new cameras appear to be identical, the difference lies in the field of view. The D415 has a narrow field of view and a rolling shutter that scans its environment from one side to the other to take an image. Meanwhile, the D435 has a wider field of view and has a global shutter that takes images all at once. This means the former is useful for smaller objects that require precise measurement while the latter is to capture depth perception in moving objects and larger areas. Also, the depth cameras offer a 1280x720 resolution at 90 frames per second while the RGB sensors provide the same resolution at 30fps.

In terms of functionality, Intel also said, "With its compact, ready-to-use form, the Intel RealSense D400 Depth Camera series not only makes it easy for developers to build 3D depth sensing into any design, but they are also ready to be embedded into high-volume products."

"With its compact, ready-to-use form, the Intel RealSense D400 Depth Camera series not only makes it easy for developers to build 3D depth sensing into any design, but they are also ready to be embedded into high-volume products."