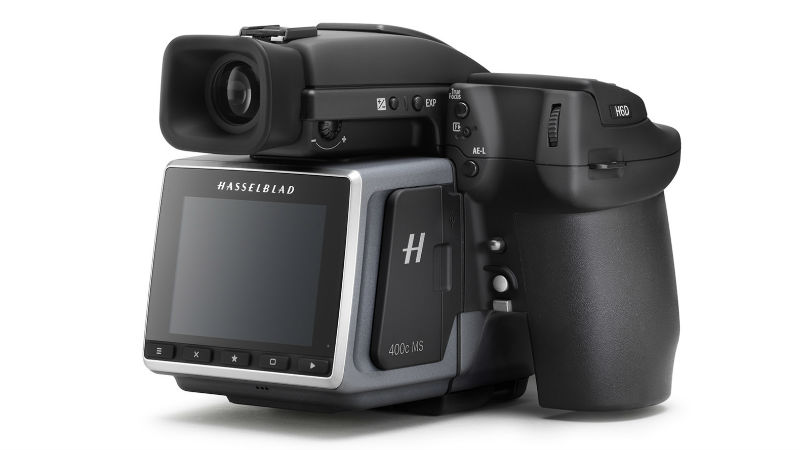 Hasselblad has announced a 400-megapixel medium format camera capable of capturing images sized at 2.4GB. The H6D-400C MS comes with sensor-shift and multi-shot features. As expected, the medium format camera doesn't come cheap as you will be shelling out $47,995 (roughly Rs. 30,64,200) for it. The pre-orders for the Hasselblad H6D-400c camera started on January 16 and it will go on sale from March this year.

The H6D-400C has been announced as an addition to the company's H6D medium format camera series. The H6D-400C system features a 100 megapixel CMOS sensor with dimensions 53.4x40mm. To attain the full 400-megapixel resolution, the H6D-400c camera relies on what Hasselblad calls Multi-Shot technology. The Multi-Shot mode is capable of capturing 6 images. In the first four, the sensor is moved one pixel at a time to get real colour data. Following this, the cycle returns the sensor to the beginning. Then the sensor is moved by half a pixel horizontally and then half a pixel vertically to get two more exposures. All the 6 images are then merged by the camera to get a 400-megapixel image. The merged image forms a 2.4GB, 16-bit TIFF file at 23,200x17,400 pixels. The company claims the resultant image has "an astonishing moire free level of detail."

There are certain limitations to the camera, as it has to be tethered via USB to a computer in order to use the multi-shot functionality. For images that do not require to use the full 400-megapixel resolution the H6D-400c MS also has a 100-megapixel option. The images can be captured in a single shot or even using the same Multi-Shot technology but only with four exposures instead of six.

Others specifications of the camera include dual media card slots (CFast 2.0 and SD card), a three-inch touchscreen display on the rear, Hasselblad's True Focus II autofocus technology, up to a 60-minute shutter speed, USB Type-C port, Wi-Fi, HDMI, and audio input. The H6D-400 has a native ISO range of 64 to 12,800 and can record Full HD and 4K UHD RAW video at up to 25 fps.

Interestingly, users who do not want to fork out such a huge amount of money for the camera can also rent it on a daily basis. Apart from the pricing mentioned, the rent fee is EUR 399 (roughly Rs. 23,400) per day.