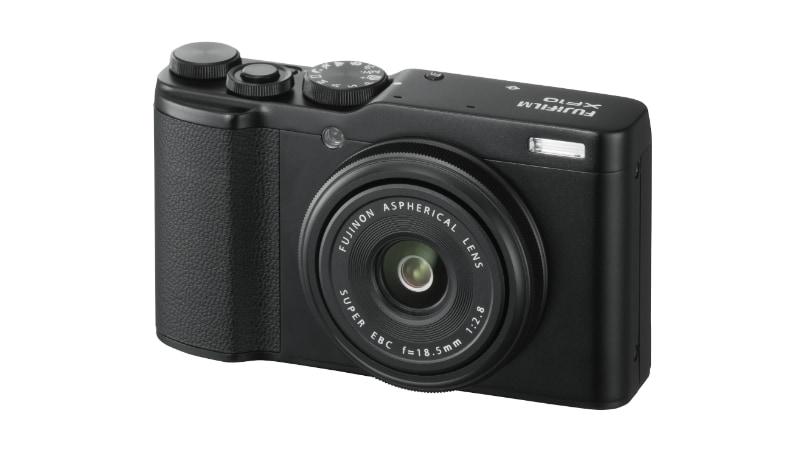 Fujifilm XF10 has been launched with a massive 24.2-megapixel APS-C sensor. Maintaining 'pocketability' despite the large image sensor, the new compact camera weighs 280 grams and includes a touch-supported LCD panel. Fujifilm has offered its proprietary colour reproduction technology and there is a wide-angle, 18.5mm Fujinon fixed lens with an f/2.8 maximum aperture. The camera comes as the successor to the Fujifilm X70 that was launched in 2016 with a 16-megapixel APS-C X-Trans II sensor along with an 18.5mm prime lens with a f/2.8 aperture. It will go on sale in the US sometime in August with a price tag of $499.95 (approximately Rs. 34,500).

Similar to the mirrorless Fujifilm X-100, the Fujifilm XF10 has a 24.2-megapixel APS-C sensor with a primary colour filter, accompanied by an 18.5mm Fujinon lens that has an f/2.8 aperture and works with a Digital Tele-Converter function that lets users select focal lengths of 35mm or 50mm (35mm equivalent focal length). The new model doesn't include a tilt screen, flash hot-shoe, or an aperture ring that were featured on the X70. Instead, Fujifilm has offered a PASM dial and a touch-supported LCD display. A preloaded 'Square Mode' is also available to enable shooting in a square format with a 1:1 aspect ratio. Additionally, there are 11 variations of Film Simulation Modes and 19 variations of Advanced Filters, including the newly added 'Rich & Fine' and 'Monochrome (NIR)'.

Alongside enabling still photography, the Fujifilm XF10 provides 4K video recording support and has a dedicated Multi Focus Mode that is touted to automatically synthesise consecutively shot images while changing the area of focus with 4K resolution. Similarly, there is 4K Burst function that lets users capture as many as 15 shots per second. A High-Speed HD Video function is also available to enable shooting of fast-moving subjects in slow motion. The advanced feature requires UHS Speed Class 3 or higher memory cards. Furthermore, there is Bluetooth LE (low energy) connectivity that can leveraged to transfer photos and videos wirelessly using the 'Fujifilm Camera Remote' app.

The Fujifilm XF10 includes a lithium polymer battery that is claimed to deliver power for as many as 330 still frames. The camera weighs 278.9 grams with its battery and a memory camera and measures 112.5x64.4x41mm.