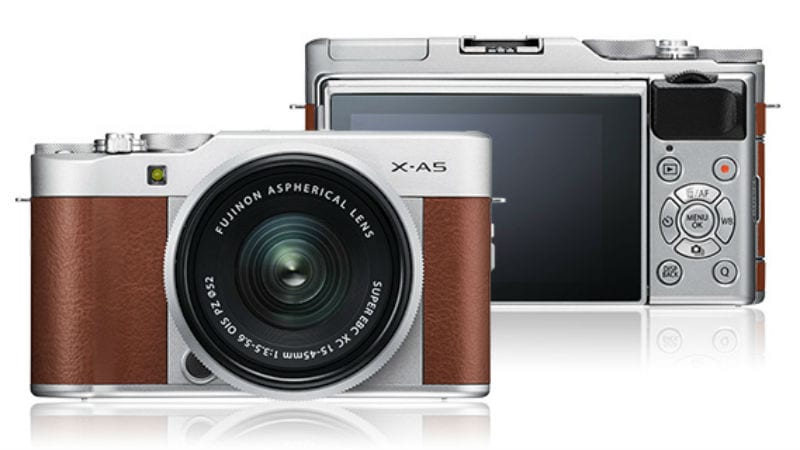 Fujifilm has announced X-A5, the company's smallest and lightest X Series mirrorless camera. Along with the X-A5 camera, Fujifilm also launched the XC15-45mm f/3.5-5.6 OIS PZ, which is an electric-powered zoom lens. It makes for the company's most compact and lightweight zoom option yet. The X-A5 camera is available at $599.95 with the lens kit. While the X-A5 comes in Brown, Pink, and Black colour variants, the lens comes in Black and Silver options.

The latest entrant in the X-series, the X-A5 features a 24.2-megapixel APS-C Bayer (instead of company's X-Trans) image sensor, 4K video recording, automatic Bluetooth image transfer, and phase-detection autofocus. The camera has a 180-degree tilting rear LCD screen. The company says that with a newly developed image processing engine, the X-A5 offers a processing speed 1.5 times faster than previous models. Meanwhile, the new X-series lens promises a smooth zooming mechanism that goes from a wide-angle 23mm to 67.5mm.

The X-A5 is the successor to Fujifilm's X-A3 camera. With on-chip phase detection, the autofocus in X-A5 is now twice as fast as the X-A3, thanks to the Intelligent Hybrid AF system. Additionally, the native ISO has also also been upgraded to 12,800 from 6,400.

Meanwhile, the X-A5 is equipped with a 3-inch rear LCD monitor that can rotate 180 degrees that automatically activates an Eye AF function which helps in capturing high quality selfies. It also has a Portrait Enhancer Mode, where users can select from three levels of skin tone enhancement.

When it comes to videos, the camera comes with a 4K Burst function that offers to shoot 15 frames per second in 4K image quality. It has a High-Speed HD Video function, which enables users to record HD video up to quad speed for slow-motion clips, the company says.

Additionally, for seamless sharing of images, the X-A5 has brought the Bluetooth Low Energy technology that delivers automatic transfer of still pictures and videos to smartphones and other devices via the Fujifilm Camera Remote app.

In terms of battery, Fujifilm says the X-A5 is rated to deliver up to 450 photos on a single battery charge.