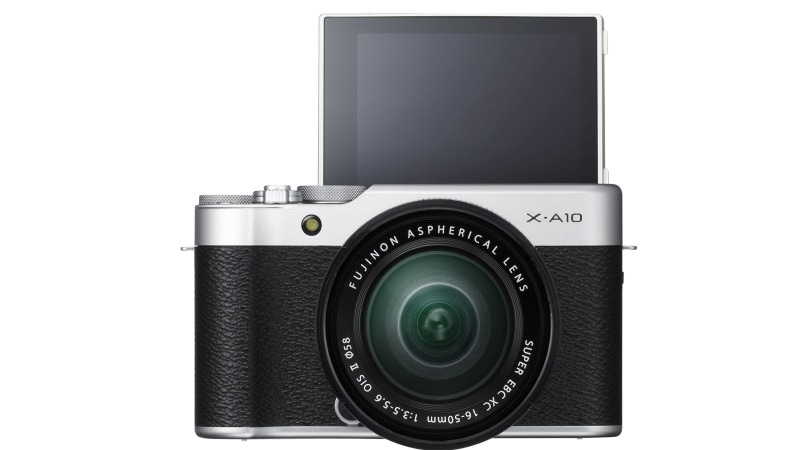 Fujifilm has announced the X-A10 entry-level mirrorless camera for first-time users. The camera will be available from January 2017 with the XC16-50mmF3.5-5.6 OIS II kit lens for $499 (approximately Rs. 34,000). The pricing seems very attractive for a mirrorless camera, which hopefully stays competitive by the time it makes its way to India. The new addition to the X-series feature a 16.3-megapixel APS-C sensor in the similar retro design as the other models in the series. The Fujifilm X-A10 camera boasts of an ISO sensitivity range of ISO200-6400, which can be further extended to ISO25600 and a total of 10 filters including fish-eye and cross screen and six film simulation modes.

The rear LCD display features a 'slide-and-tilt' mechanism, which lets you flip the screen 180 degrees for the "selfie-mode". The grip of the Fujifilm X-A10 camera is said to have been designed in a way to allow comfortable shooting for regular shooting and for self-portraits. It also features Eye Detection AF for getting sharper selfies.

Fujifilm has rated the battery in the X-A10 at 410 shots per charge and you can also charge it through it on-the-move through the USB port. The camera can record full-HD video at 30fps for up to 17 minutes at a stretch. There's a pop-up flash in the camera for low-light shots; built-in panorama and timelapse modes; and new functions such as interlocking of metering and AF areas, support for the Adobe RGB colour space, and choice of different colours in focus peaking for assisting manual focus. The camera also lets you transfer pictures from the camera to your smartphone over Wi-Fi, through Fujifilm's Camera Remote app.

India to Have 600 Million Internet Users by 2020, Says ASSOCHAM-Deloitte Study
Demonetisation Most Significant Moment in India This Year, Says Twitter