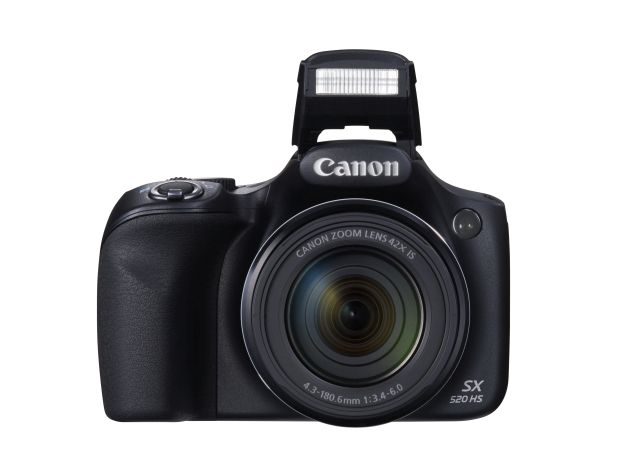 Canon on Tuesday announced the launch of a new camera in the SX series - PowerShot SX520 HS - an upgrade to the PowerShot SX510 HS. The super-zoom camera will be available exclusively via Amazon India website for Rs. 17,995. The 16-megapixel camera has a 24-1008mm (35mm equivalent), long 42x optical zoom lens, which is extendable to 84x with Canon's ZoomPlus Technology. A 168x Combined Zoom option is also available.

The camera uses a 1/2.3-inch CCD sensor and Canon's proprietary Digic 4+ image processor, which the company claims captures improved still images apart from enabling full-HD 1080p video recording capabilities. The lens on the Canon SX520 HS has a sensitivity of ISO 3200, which can be boosted to ISO 6400 in low-light mode. It has a 3-inch TFT LCD with a 461,000 dots resolution. At its widest, the camera has a focal length of f/3.4 and at the telephoto end of things it can touch f/6.0.

Canon also adds a function called 'Advanced Zoom Framing' on the PowerShot SX520 HS that enables users to capture sharp images of moving subjects from long ranges. Canon claims that the Advanced Zoom Framing Assist is an improvement from the regular Zoom Framing Assist function featured in its predecessor. Canon claims that this new function helps track and maintain clarity of the subject in focus within the frame and works in two ways - Seek Assist and Auto Zoom.

The Canon SX520 HS measures in at 120.0x81.7x91.9mm, and weighs 441g. On the software side of things, the PowerShot SX520 HS has a Creative Shot function that comes with 46 different filters, which is double the amount available in Canon's previous generation of cameras.