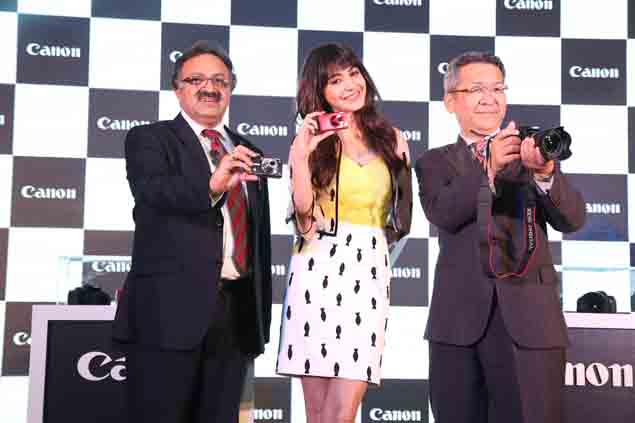 Canon has introduced 12 new camera models in the India market, which includes the first 4K camera model EOS 1DC. Out of the 12 cameras that the company unveiled five are Wi-Fi enabled and their price ranges between Rs. 9,995 to Rs. 1,24, 995.

Lastly, the Canon IXUS 255 HS packs in a 12.1-megapixel sensor along with 20X zoom. This camera is capable of recording full-HD videos. It carries a retail tag of Rs. 12,995.

Last year Canon had launched its Cine Cameras range. This year the company has added two new cameras in this range in the form of EOS C100 and EOS 1DC, thereby taking the total tally to four. EOS C100 combines Canon CMOS sensors, DIGIC DV III Image Processor, and EF lens compatibility in a smaller, lighter body. This camera is capable of recording 24 Mbps using the AVCHD codec and costs Rs. 5,00,000. EOS 1DC is a 4K camera that packs in 18.1-megapixel full-frame CMOS Sensor and will be available for a whopping Rs. 9,00,000.

The Japanese camera-maker also unveiled its Cannon Image Gateway in India. All the consumers who buy a Wi-Fi enabled camera from Canon will get 10GB of cloud space on this Gateway.

Commenting about the launch, Kazutada Kobayashi, President and CEO, Canon India stated, "India is a prime market for Canon and it is imperative for us to keep introducing high-end technology to stay ahead in such a competitive market. Today's launch focuses on a range of innovative cameras responding to the growing demand for technology amongst Indian users."

Cannon is currently offering 40 cameras in the Indian market. It intends to capture a 45 percent market share in the DSLR category and 25 percent in the digital compact camera segment in 2013. Dr. Alok Bharadwaj, Executive Vice President, Canon India, said, "We expect one-third of total compact digital camera business to now come from our Wi-Fi models".
Comments