Now, though, relatively new gadgets called selfie sticks make it easy to take your own wide-angled self-portraits or group shots. Fans say the expandable rods, which allow users to hold their cellphones a few feet away, are the ultimate convenience: no more bothering passers-by to take pictures, no more fretting about strangers taking lousy shots or running off with a pricey iPhone.

But some travelers bemoan the loss of that small interaction that came with politely asking a local to help preserve a memory. And critics express outright hatred of selfie sticks as obnoxious symbols of self-absorption. They even have a derisive name for them, playing on the narcissistic behavior they think the sticks encourage: narcissi-stick.

Sarah Kinling of Baltimore said she was approached "17 times" by vendors selling selfie sticks at the Colosseum in Rome. "They're the new fanny pack - the quickest way to spot a tourist," she said. "The more I saw them in use, the more I saw how much focus people were putting on selfies, and not turning around to see what they were there to see." 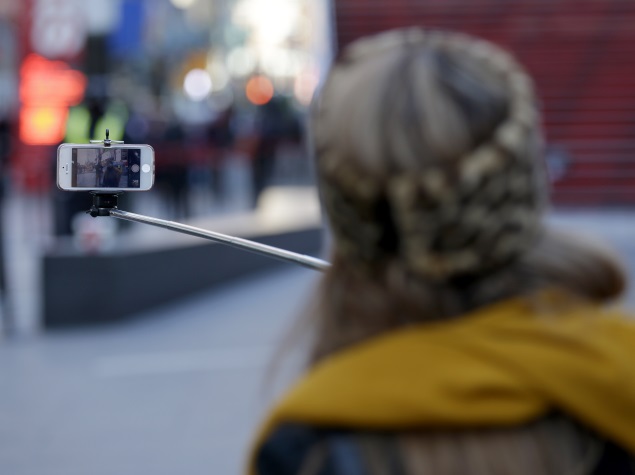 When Kinling wanted a photo of herself with her sister and sister-in-law, she asked strangers to take the shot. "Even when the other person didn't speak English, you hold your camera up and make the motion and they understand," she said.

But some travelers say it's better to stage your own vacation photos. Andrea Garcia asked a passer-by to take her photo in Egypt and later realized he'd zoomed in on her face, cutting out the pyramids behind her. "I couldn't really be mad at him - he wasn't my photographer, I didn't pay him," she said. The experience made her appreciate the selfie sticks she sees tourists using at 1 World Trade near her office in Lower Manhattan. "Take control of your image!" she says.

Selfie sticks are just starting to show up at attractions in the U.S., but they're ubiquitous in many destinations overseas, from Dubai's skyscraper, the Burj Khalifa, to the Eiffel Tower in Paris. A soccer stadium in London, White Hart Lane, has even banned them because they obstruct other fans' views.

The sticks range in price from $5 to $50. Simpler models merely grip the phone, so users must trigger the shot with a self-timer on the camera. More sophisticated versions either use Bluetooth technology or connect the phone to the stick with a cord, with a button on the grip triggering the shot. 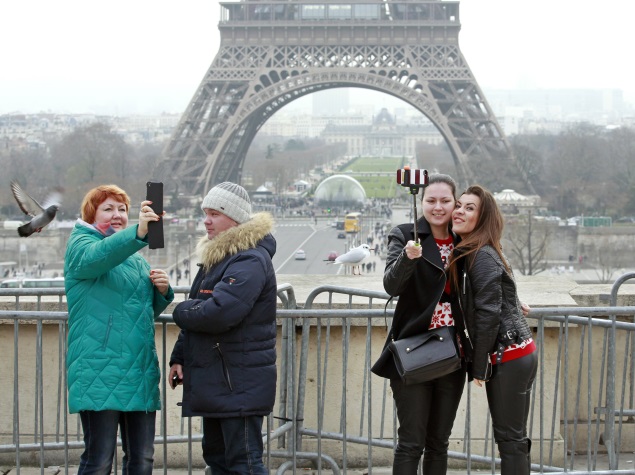 Jasmine Brett Stringer of Minneapolis writes a lifestyles blog called "Carpe Diem with Jasmine" and uses selfie sticks to record her videos. "A friend brought one back from Dubai and I said, 'I've got to get one,'" she said. Now she doesn't have to rely on others to help shoot her work. The sticks are also an improvement over hand-held selfies because they let you shoot "at better angles, avoid the awkward arm reach and the dreadful half-face shot."

Megan Marrs of Boston, who writes a travel blog called Vanishing Balloons, thought the sticks were ridiculous when she saw them on a trip to South Korea last fall. "It seemed so vain and silly," said Marrs. But she bought one to bring home as a gift, ended up trying it herself and became a fan.

"I don't love intruding on other people's experience, asking them to take my picture - they're there to enjoy their time, too," she said. "Sometimes I feel silly - one more tourist taking a selfie in front of the Colosseum - but I'm more comfortable doing it myself than asking someone else."