Affordable audio brand Zebronics has been around for a long time, and has a strong position in both the online and offline markets with a presence on e-commerce retailers and in small electronics stores. The company seems to have a good idea of what works in India and what doesn't, particularly when it comes to affordable audio products such as headphones, earphones, and speakers. One of Zebronics' newest products in India is the Zeb-Monk, a wireless in-ear headset priced below Rs. 3,000.

Although there are plenty of neckband-style options at this price, what makes the Zeb-Monk special is the inclusion of one key feature: active noise cancellation. This is among the most affordable wireless headsets I've come across with ANC, and I've been keen to see just how well the Zeb-Monk works, considering its price. Read on to find out everything you need to know about these wireless earphones in our review.

Zebronics is a familiar name in the business of affordable audio, and the Zeb-Monk is among the most affordable wireless headsets with ANC today

There was a time when affordable wireless earphones were pretty basic, but the last couple of years have brought us some impressive options that offer great design and build quality even on a budget, such as the OnePlus Bullets Wireless Z. The Zebronics Zeb-Monk doesn't quite match up to those standards; this is quite an ordinary-looking pair of earphones.

With plain, dull plastic on the earpieces and neckband, the Zebronics Zeb-Monk feels a bit cheap to hold and touch, and even the Zebronics logo on the left side of the neckband seemed to be fading before I had even started using this headset. The earpieces latch together magnetically, but this is only for easy storage and doesn't control the power as on some headsets. Although it looks and feels ordinary, the Zeb-Monk is a comfortable headset with a decent fit and good passive noise isolation.

The right side has physical buttons for power and active noise cancellation, a touch sensor that controls the volume, and a Micro-USB port for charging. This is quite disappointing considering that many options that cost much less now come with USB Type-C. The sales package includes a total of three pairs of silicone ear tips and a charging cable.

The touch sensor for volume adjustment is strangely complicated to use; a double-tap increases the volume by one small increment at a time, while touching and holding the sensor quickly lowers the volume. This was confusing and quite frustrating to operate, and the Zeb-Monk would have been better off with regular buttons to change the volume.

The Zebronics Zeb-Monk uses Bluetooth 5 for connectivity, with support for only the SBC codec. There are 12mm dynamic drivers, and the headset is claimed to be splash-proof, but doesn't have a listed IP rating. As mentioned, there is active noise cancellation on the earphones. I was able to use the Zebronics Zeb-Monk for around 6-7 hours of mixed usage on a single charge, with ANC on most of the time. This isn't very good, even considering the price and features.

Sound is quite plain on the Zebronics Zeb-Monk

I've heard some pretty decent-sounding wireless headphones and earphones priced below Rs. 5,000, and the Zeb-Monk is unfortunately not among the best in the segment when it comes to sound quality. While I wouldn't go so far as to call it bad, it's best described as ordinary and entirely plain. I used the earphones with Android and iOS smartphones as well as a MacBook Air to stream music, watch videos, and answer phone calls.

The earphones sound closer to what you'd expect from a much more affordable pair such as the Redmi SonicBass wireless earphones, with just the presence of active noise cancellation to try and justify the additional cost. ANC does help make music a bit easier to listen to by cutting out some background sound, but without support for the AAC Bluetooth codec or proper tuning, it doesn't make a huge difference.

Whether listening to high-resolution music on Tidal or compressed streams on Spotify and YouTube Music, the Zebronics Zeb-Monk sounded the same, as would be expected from any headset that uses just the SBC Bluetooth codec. This also meant that there wasn't too much detail to be heard, even with nuanced and elaborate tracks such as Truth by Kamasi Washington. The soundstage wasn't very wide, just about managing to keep up with the interplay between the two channels. 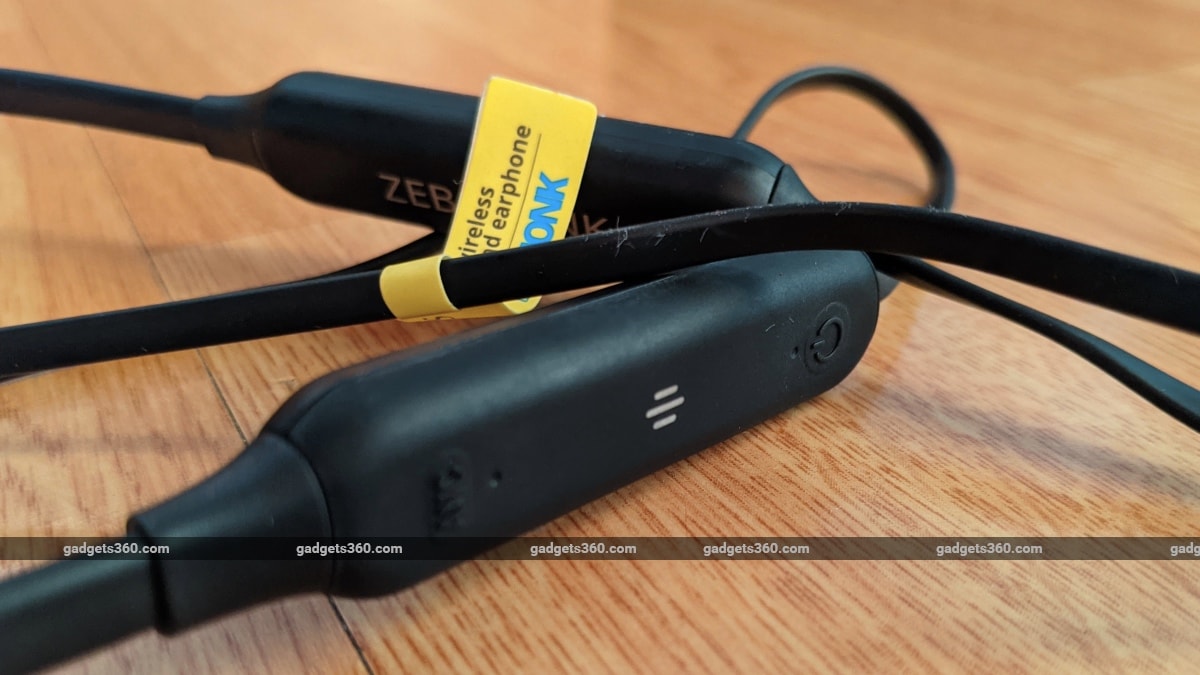 The Zeb-Monk has touch controls for volume, but it's a rather complicated system that I didn't find productive

That aside, there was always a sense of roughness to the sound, particularly in the lows. Although the Zebronics Zeb-Monk is tuned to amplify the bass and treble in a typical V-shaped sonic signature, there was just a hint of audible harmonic distortion in the lowest frequencies, giving the sound a somewhat unpleasant grunt. This was particularly noticeable in the drums and double-bass elements in Truth.

While well-engineered tracks such as Truth managed to hide the Zeb-Monk's flaws to some extent, its lack of depth was quite easily revealed in tracks from popular genres. Your Love by Mark Knight was loud and punchy, but the narrow soundstage and unrefined, plain sonic signature brought out none of the excitement and feel in this track that I've often enjoyed on good headphones and earphones.

Active noise cancellation for less than Rs. 3,000 is the main promise that got my attention, and while it isn't quite as good on the Zeb-Monk as on the slightly more expensive Realme Buds Wireless Pro, it wasn't bad by any means. There was a gentle reduction in typical background household sounds such as ceiling fans and air conditioners, and this made it a bit easier to listen to music and dialogue in videos. It didn't sound as natural, although it also didn't affect sound quality, as it does on the Realme headset.

Bluetooth connection quality and stability were decent enough on the Zebronics Zeb-Monk, but call quality was poor. Voices sounded rough and were sometimes unclear, and I had to switch to my smartphone's earpiece on a couple of occasions. There's no environmental noise cancellation, and weak microphones meant that I couldn't be heard on the other end of the call clearly enough. 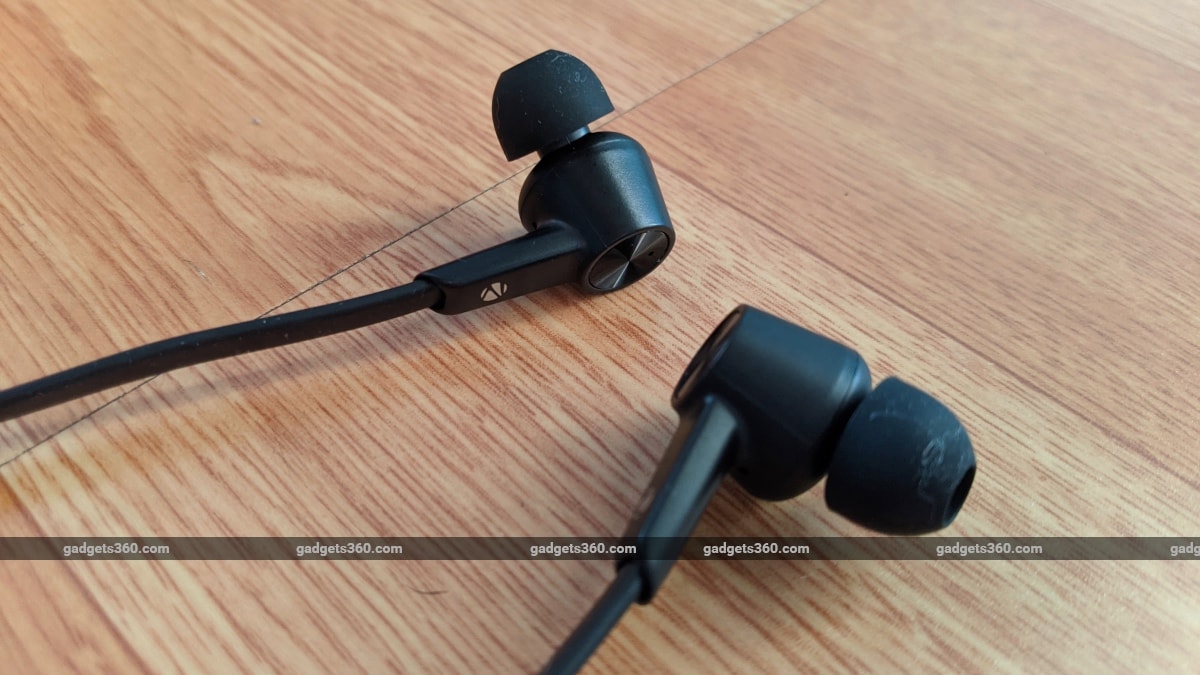 Although ANC is functional, sound quality is very plain on the Zebronics Zeb-Monk

Although usable active noise cancellation at this price is a feature worth noting, the Zebronics Zeb-Monk offers very little beyond this. With a plain design, strangely complicated controls, ordinary build quality, below-average battery life, and unexciting sound, these earphones don't have too much going for them. There just isn't much appeal in the Zeb-Monk beyond its signature feature.

If you're firm on a budget of Rs. 3,000 and insist on having active noise cancellation, the Zebronics Zeb-Monk fits the bill. However, I'd recommend the Realme Buds Wireless Pro, which is objectively better in every way for just Rs. 1,000 more. If you absolutely don't want to spend more, the OnePlus Bullets Wireless Z is an excellent option priced at Rs. 1,999 in terms of sound quality and features, provided you're willing to give ANC a skip.

Further reading: Zebronics, Zebronics Zeb-Monk, Zebronics Zeb-Monk Review, Zebronics Zeb-Monk Price in India, Zebronics Zeb-Monk Specifications, Bluetooth, Active noise cancellation
Ali Pardiwala Email Ali Ali Pardiwala writes about audio and video devices for Gadgets 360 out of Mumbai, and has covered the industry for a decade now. Ali is a Senior Reviewer for Gadgets 360, where he has regularly written about televisions, home entertainment, and mobile gaming as well. He is a firm believer in 4K and HDR on televisions, and believes that true wireless earphones are the future of the personal audio industry. Ali is available on Twitter as @AliusPardius and on email at alip@ndtv.com, so do send in ...More
FarmVille, One of the Most Popular Games on Facebook, Shuts Down Tomorrow; Creator Shares Insight
Redmi 9T Launch Rumoured for January 8, Xiaomi Tipped to Launch at Least Nine Phones in Early 2021