Xander Audios is a relatively unknown Delhi-based company that launched a range of audio products in India, and also forayed into the world of televisions recently. Today, we have the new XA-339 Stealth-2 in for review, which is an enormous multimedia speaker with a plethora of lights up front, aimed at party animals. With 120W (RMS) of power, Bluetooth connectivity, FM support, and support for SD cards, the speaker looks promising on paper. It is priced at Rs. 9,999 but can be found for less than Rs. 9,000 online.

There are no two ways about it - the XA Stealth-2 is big, bulky, and flamboyant. There is a huge 6.5-inch woofer up front flanked by two 3-inch dynamic drivers and an array of LED lights. The woofer lights up in time with the music and is covered with a grille carrying the XA logo. The light effects will surely be a big hit at parties and nights out, but they are far too ostentatious and attention-grabbing for day-to-day use. In a dark room, with the speaker's lights on, many people remarked that it looked like an extra-terrestrial life form.

There are a plethora of colours for the LEDs, which can by cycled through using the 'lights' button on the remote. There's a mode that allows you to cycle between all colours at preset time intervals. The remote, which has soft and mushy buttons, can also be used to control playback, change the volume, tune the radio, cycle between sources, and adjust the treble and bass levels. The remote also has a numeric keypad that can be used to navigate files stored on USB sticks and SD cards. 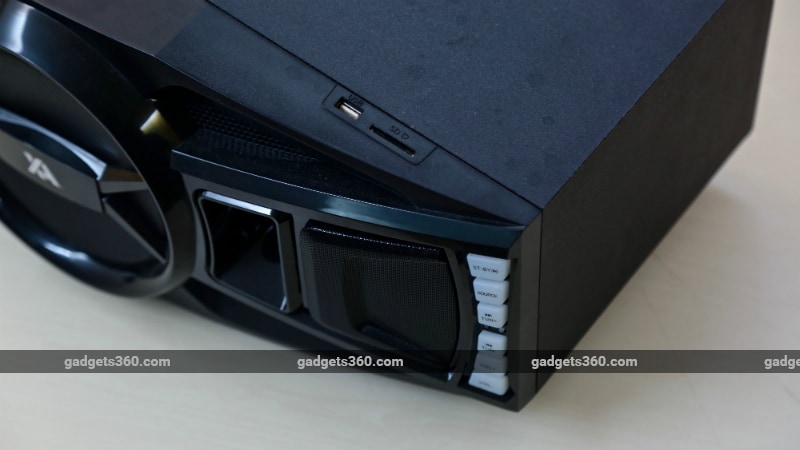 The speaker can be placed either vertically or horizontally and is made of hard plastic. The design seems inspired by old science fiction movies, and is a strange blend of old-school and futuristic cues. With its huge woofer, bass vents, and substantial speaker grilles, it reminded us somewhat of boomboxes seen in the 80s.

Product design is moving towards minimalism these days but the Stealth-2 is anything but minimalist. This is not a sleek-looking speaker that will blend right in with your room. It commands attention and will definitely come across as gaudy to those who prefer simpler and classier designs.

There are six buttons up front: two to skip tracks backward and forwards, two for volume, one for changing the source, and a standby switch that is also used to play/pause music. To add to the party effect, the buttons also light up in blue. There are two LEDs in the middle of the row of buttons, one of which indicates the power status and frustratingly always remains on. The second lights up whenever the remote is used.

The XA Stealth-2 is a wired speaker without any internal battery. The power supply is built-in and there is no bulky external power brick to deal with. On the connectivity front, the Stealth-2 supports Bluetooth and has a USB port, an aux-in port, a DVD input which is basically just another auxiliary input, an FM antenna terminal, and an SD card slot. Xander Audios supplies a 3.5mm to RCA stereo audio cable in the box along with an FM antenna cable. The speaker lacks any sort of digital input such as coaxial or optical, but that is excusable as it is aimed primarily at music and is not really targeted as a soundbar for your TV. 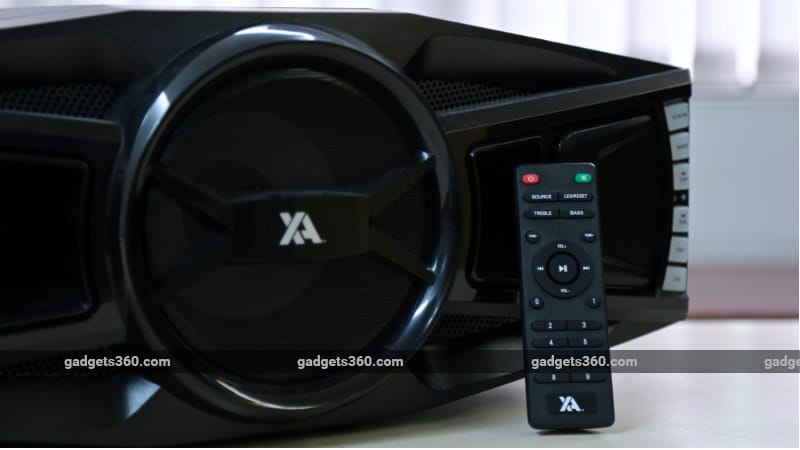 While the design is unique, build quality is highly questionable. The plastics feel cheap and chintzy, the USB and SD ports are poorly finished and have jagged edges, the buttons up front are hard to press and move around, and the remote feels flimsy.

After seeing the cut-rate build quality first-hand, we did not expect much from the speaker in terms of sound quality. However, we were pleasantly surprised by the bass. It is tight and punchy, and enough to shake the walls of your home. However, the bass overpowers the sound mix and distorts at loud volume. The mids are thrown to the kerb, and the level of clarity and detail is sub-par to say the least.

In densely layered tracks such as 'Undercover Martyn' by Two Door Cinema Club and 'Airbag' by Radiohead, all the frequencies just seem to collapse in on themselves. The highs do not get shrill or sibilant, but lack sparkle and come across as listless. The XA Stealth-2 is best suited to bass-heavy genres such as EDM and R&B.

Even after attaching the included antenna, FM radio reception was rather poor. The speaker was unable to pick up some of the popular radio stations in our area. The speaker supports MP3 playback from USB media and SD cards, but without a display of any sort, navigating files was very cumbersome.

Verdict
The Xander Audios Stealth-2 XA 339 does have its merits - the lights at the front are tacky but fun, and the bass is deep and resounding. However, the build quality is substandard, the level of audio clarity and detail is mediocre, and mids are highly repressed.

The product is a bit too unpolished to warrant a recommendation. Even the Stealth-2's room-shattering volume level is not enough to tilt the cards in its favour. Those looking for a party-oriented speaker with punchy bass and LED lights would be better served by the Sony SRS-XB31, which retails for Rs. 9,900 and is a much better-rounded product. The LG FH2 X-Boom, which promises deep bass and loud volume, is another option worth considering.

product The Xander Audios Stealth-2 XA 339 is a speaker with an array of lights up front, and is aimed at party animals. It comes with Bluetooth support. 2.5 out of 5 stars