In the early- to mid-2000s, tiny collapsible speakers by the brand X-Mini were all the rage. If you think back, you would have almost certainly have seen one of these little round speakers which could physically extend with an accordion-style neck, which made the sound surprisingly rich for a speaker that small. The company has been dormant for a long time, but now it's back in action with a new range of speakers.

Today, we'll we testing one of its new mini speakers called the Xoundbar. It's a tiny, palm-sized device that boasts of two drivers and is also IPX4 certified, which means it can handle light splashes of water. While there are many options at around the Rs. 3,000 price point that feature an IPX4 rating, not many are this pocketable. Let's see if the Xoundbar can impress us with its audio quality, as much as it has with its diminutive size.

The Xoundbar is rectangular and pretty light at just 128g. It's about the size as a harmonica, and could even be mistaken for a small power bank. The plastic body feels sturdy and there is metal mesh on both sides to protect for the drivers. The design is very simple, which we like. 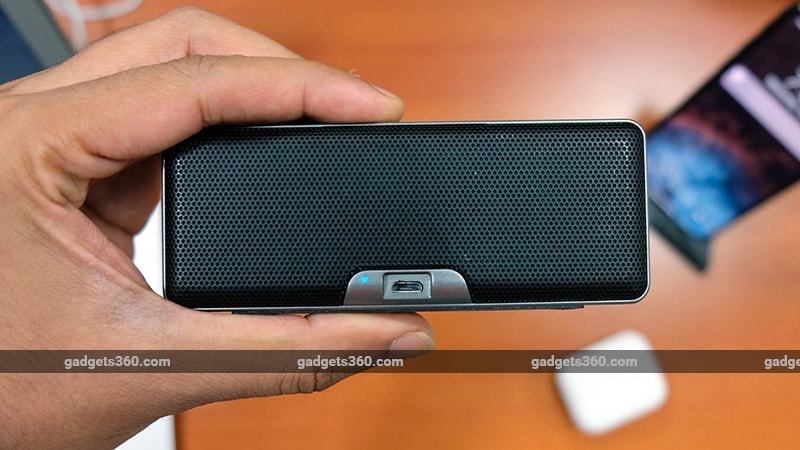 There are four buttons on the top for power, play/ pause, volume down, and volume up. The unit stays put on most surfaces, thanks to a rubber strip on the bottom. At the back, we have a single Micro-USB port and an LED status indicator. In the box, you get a Micro-USB cable and a well illustrated manual.

The X-Mini Xoundbar works on Bluetooth 4.2, which gives it a theoretical range of 10 meters. If the loudness of one Xoundbar isn't enough, you can pair two of them together. There are two 3W speakers which have a frequency range of 160Hz to 16,000Hz. The higher starting point indicates that this speaker might not do too well at delivering bass, which we'll get to in the next section. The Xoundbar also features a built-in microphone, so you can use it for phone calls.

The Xoundbar automatically enters pairing mode the first time you power it on. You get audio cues when it connects or disconnects from a source, and only one source can have an active connection at a time. The speaker has an independent volume control system, which means that you need to adjust your source device's volume separately.

Going by the diminutive size of the speaker, we were not expecting it to sound the way it does - which is incredibly loud. This is mostly due to the dual-driver configuration. Bass sounds tinny and is pretty much non-existent for the most part, so don't expect any thump or kick in bass-heavy tracks. Instrument and vocal separation could have been better, which is evident in busy tracks such as Paradise City by Guns N' Roses. The highs are fairly crisp most of the time, but can sound slightly piercing when you push the volume all the way up.

The buttons have good feedback, but the labelling of the volume buttons is a bit misleading. A single press of the ‘Volume Up' button skips to the next song, so in order to actually adjust the volume, you need to hold the button down. The same goes for the ‘Volume Down' button, which skips to the previous track. The blinking LED is your only indication of the how much power the battery has left (it flashes red when it's low). If you're on Android Oreo, you can see a battery bar in the Bluetooth menu, but this doesn't show up on iOS devices.

You can use the speaker to handle calls too. In our experience, the person calling us sounded loud and clear through the speaker, but our voice wasn't picked up clearly. To the caller, it sounded as if our voice was coming from a distance even when we were right next to the speaker.

The Xoundbar is rated to run for five hours on a single charge, and in our testing, we often managed to go beyond that to about seven hours. This was using varying volume levels, and there were some intervals when the music was paused, but the speaker was never turned off. This is very good given the size of the speaker. Charging it takes about two and half hours over a USB connection.

Verdict
The X-Mini Xoundbar has a box price of Rs. 3,790, but if you look online, it often sells for much less, at around Rs. 2,700. This is not a bad price for a speaker that's splash-resistant, gets ridiculously loud, and can fit in your shirt pocket. The audio quality is not bad for casual listening but if you want to get serious, then you could consider the Ultimate Ears Roll 2, which also happens to have slightly better resilience to water with its IPX7 rating, for a bit more money.

Overall rating (Out of 5)

Further reading: X-Mini Xoundbar review, X-Mini Xoundbar price, X-Mini Xoundbar price in India, budget waterproof speaker, Bluetooth speaker
Roydon Cerejo Email Roydon
Roydon Cerejo writes about smartphones and laptops for Gadgets 360, out of Mumbai. He is the Deputy Editor (Reviews) at Gadgets 360. He has frequently written about the smartphone and PC industry and also has an interest in photography. With over a decade of experience covering the consumer technology space, he is also an avid sci-fi movie and TV show geek and is always up for good horror flick. Roydon is available at roydon@gadgets360.com, so please send in your leads and tips. More
Huawei P20, P20 Pro India Launch on April 24
If Call of Duty: Black Ops 4 Doesn’t Have a Single-Player Campaign It Shouldn't Cost $60, But It Probably Will Anyway
product The X-Mini Xoundbar is a ridiculously loud speaker that can easily fit in your shirt pocket. 4 out of 5 stars