Wireless headphones and earphones aren't expensive anymore, and you can now buy a functional product for less than Rs. 2,000. This is great for buyers, since it was difficult to imagine spending less than Rs. 5,000 on wireless headphones till recently. Today we're going to review one such product, which features everything you would expect from a pair of wireless earphones, while keeping the price affordable enough for the budget shopper.

The Stuffcool Monty wireless earphones are feature-filled and cost Rs. 1,999, offering first-time buyers an affordable entry-point into the world of wireless audio. However, Stuffcool isn't a well-known brand in the audio space, and the affordability of this might raises questions about its quality. We find the answers to these questions and more in our review of the Stuffcool Monty. The neckband style is gaining popularity in the wireless earphones space. Such headsets are generally comfortable and allow for a battery and controls to be accommodated without making the earpieces too bulky. The Stuffcool Monty goes with this design, with a flexible neckband and short wires leading to the actual earphones. The right side of the neckband has controls just like an in-line remote would, plus a microphone and a Micro-USB port for charging the headset.

The earpieces have a reflective silver finish and adjustable wire at the top that lets you customise the fit a bit. In our opinion, this wasn't needed at all, since the earphones fit the same way regardless of how much we adjusted the wire. At no point was the fit ideal; the earpieces tended to stick out of our ears a bit and didn't give us a proper noise-isolating seal.

We found the plastic body of the Stuffcool Monty to be rough around the edges, and lacking in refinement. While compromises can be expected from any affordable product, the lack of attention to the finish of the Monty was quite disappointing.

On the other hand, one good feature is the magnets in each earbud that keep them together when not in use. The device doesn't automatically turn off when you snap the earpieces together; the magnets only serve to keep the cables from tangling, like we found with the Realme Buds.

The Stuffcool Monty features Bluetooth 5 and has a 180mAh battery. We were able to get about 7 hours of battery life on a single charge, which is decent for a neckband-style headset. The Bluetooth connection to our test devices was consistently stable during our review.

The Monty lets you connect two devices simultaneously. Although audio can be played from only one at a time, we found it useful to be able to quickly switch between our computer and smartphone. The Stuffcool Monty is one of the most affordable pairs of wireless earphones we've used, and we were curious to see if the price had any impact on the sound quality and overall performance. While battery life and connection stability were good on the Monty during our review, sound quality unfortunately wasn't. The Stuffcool Monty has a sound that feels dull, unrefined, and unexciting.

Listening to Lovely by Soulstice on Spotify, we felt that the Monty didn't do justice to this exciting and lively track. There was practically no discernible thump in the bass, the mid range sounded awkward, and the high-end felt rough and unpolished. The previously mentioned weak noise isolation makes things worse across the sonic range, with even soft ambient sounds getting in the way.

Many buyers like a bass-heavy sound profile, which isn't to be found on the Stuffcool Monty. The low end can barely be heard at all, and what is very clearly audible is limited to the mid-lows. We couldn't hear proper sub-bass even when listening to the bass-heavy In My Head (Airplane Mix) by Riton, and the exciting beat of the track fell flat when listened to on the Stuffcool Monty.

Turning the volume up only made the sound worse, and we were only comfortable listening to the Stuffcool Monty at volume levels below 50 percent. High volume levels made the highs sound even more crude. Furthermore, we found the soundstage to be poor, barely succeeding in getting stereo separation right, let alone going further. High-resolution audio tracks sounded no different to compressed or streamed audio tracks.

The Stuffcool Monty somewhat makes up for poor sound quality with its performance on voice calls, which we found to be acceptable. The weak noise isolation means that you can hear a fair amount of your surroundings even while listening to music, which might suit users who spend a lot of time outside in settings where attention is required, such as while commuting or walking on a street. 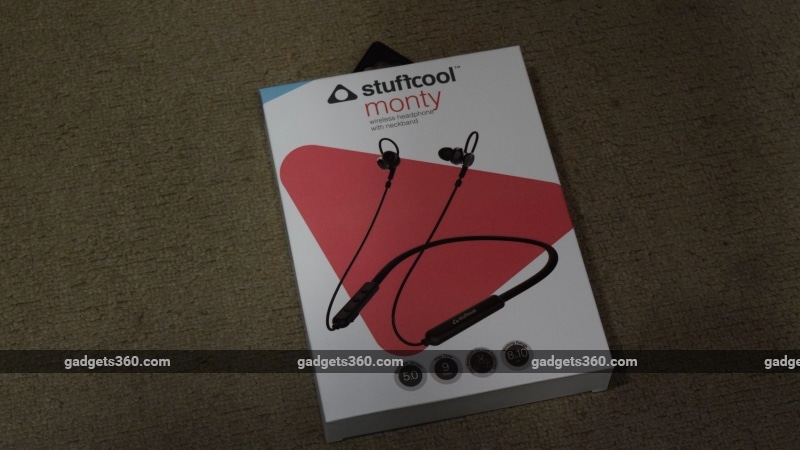 Verdict
The Stuffcool Monty gets some things right, but more things wrong. Its battery life, Bluetooth 5 connectivity, performance with voice calls, magnetic clamping mechanism, and neckband fit are positives for this headset, but poor sound quality and overall design make it hard to recommend.

If you're just looking for a pair of wireless earphones for casual listening on your commute, the Stuffcool Monty could be worth your while. At an extremely low price, the Monty is indeed one of the most affordable stereo Bluetooth headsets, and that convenience could make it somewhat worthwhile for many buyers.

Further reading: Stuffcool, Stuffcool Monty, Bluetooth, Wireless Earphones
Ali Pardiwala Email Ali Ali Pardiwala writes about audio and video devices for Gadgets 360 out of Mumbai, and has covered the industry for a decade now. Ali is a Senior Reviewer for Gadgets 360, where he has regularly written about televisions, home entertainment, and mobile gaming as well. He is a firm believer in 4K and HDR on televisions, and believes that true wireless earphones are the future of the personal audio industry. Ali is available on Twitter as @AliusPardius and on email at alip@ndtv.com, so do send in ...More
Netflix Looms Large as US Theatre Owners Assess Industry Future
Scammers Peddling Bogus Tax Breaks Find Traction on Facebook

product At Rs. 1,999, the Stuffcool Monty is an affordable entry point into wireless listening, but how does it perform? We review the earphones to find out. 3 out of 5 stars