Should Bose be worried about Sony WH-1000XM3's noise cancellation capabilities? Read on to find out

Bose's QuietComfort range has been the gold standard for noise cancelling headphones for quite a while, though Sony has been slowly and steadily making its presence felt in this segment with the MDR-1000X and last year's WH-1000XM2. The WH-1000XM3 is an iterative update, which brings with it a slightly revised design and a new QN1 chip for noise cancellation that Sony promises delivers four times better performance than before.

At Rs. 29,990, the Sony WH-1000XM3 is Rs. 1,000 cheaper than what its predecessor was available at launch in India, and roughly the same price as its primary competitor, the Bose QC35 II. It features 40mm drivers in each ear cup, a claimed 30-hour battery life, and support for high resolution audio codecs such as aptX HD and LDAC. Let's see how Sony's latest offering fares in our full review.

While the WH-1000XM3 looks rather similar to its predecessor, there are some noticeable differences such as a move from metal to plastic in the headband, which reduces weight but makes the headphones look and feel slightly less premium. The WH-1000XM3 is available in two colours, black and platinum silver, which is the shade our review unit came in. Both feature gold Sony logos and highlights around the cutouts for the microphones on the ear cups.

The new model is 20g lighter than the WH-1000XM2. The ear cups are softer and plusher, the clamping force has been reduced, and there's more padding in the headband as well. As a result, the headphones are extremely comfortable, even for extended listening sessions.

The touch controls are much more reliable than those of the WH-1000XM2, on which we found the implementation to be a bit iffy. The volume level can be changed by swiping up or down on the right ear cup, and a right or left swipe skips tracks forwards or backwards respectively. A double-tap in the centre of the ear cup will play/pause music. The controls are quite handy but they do take some getting used to.

You can also hold your hand over the ear cup to activate the ‘Quick Attention' mode, which drastically reduces the volume and lets in outside noise. The same gesture can also be configured to fire up Google Assistant or Siri, depending on your smartphone of choice, though Alexa is not supported at the moment. 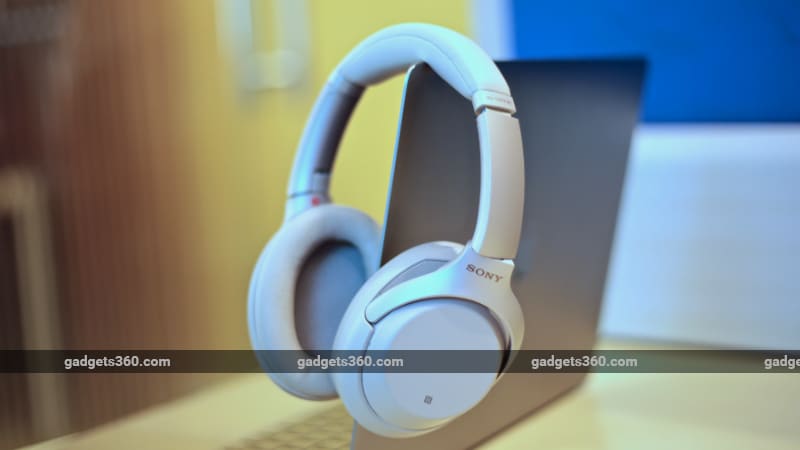 There are two physical buttons on the left ear cup: one for switching between noise cancellation modes (or calling up Google Assistant/ Siri) and a power button. The buttons are on the smaller side and do not have much feedback. We would've liked to see a dedicated Assistant button instead of trading off the ability to switch noise cancellation modes.

A canvas-covered reinforced carry case is included in the box, along with a rather small USB Type-C charging cable, an airplane adapter, and a sturdy auxiliary cable. The headphones fold flat for easy storage and fit snugly inside the high-quality case. Whenever you turn on the headphones, a robotic female voice calls out the battery level. This can also be triggered by tapping the power button once.

In this day and age when most headphones, even high-end ones, are stuck with a Micro-USB port for charging, the WH-1000XM3 has a USB Type-C port, which Sony claims has helped reduce the time taken to fully charge the headphones by an hour. The company claims that the headphones can last for up to 30 hours on a single charge. We managed to match that claim easily, with noise cancellation enabled most of the time. A full charge takes around 3 hours, but a 10-minute charge will power the headphones for 5 hours, which is quite impressive and useful.

Traditionally, Sony's noise-cancelling technology has fallen short of the standard set by Bose. This time around, it wouldn't be remiss to state that has Sony not only caught up, but actually surpassed Bose. This is thanks to the new QN1 processor for noise cancellation, which is claimed to offer around four times better performance than before.

In our experience, the headphones did a stellar job drowning out ambient noise in almost any situation we threw at them, be it the hustle and bustle of the office, or a coffee shop in a noisy mall. The low-volume hiss often associated with noise-cancellation headphones was also entirely absent.

Thanks to the generous foam padding and the over-the-ear (circumaural) design, the passive sound isolation is also excellent. The headphones do leak sound a bit when the volume is above 80 percent, which should be kept in mind while using them in crowded places.

There are multiple noise cancellation profiles that allow the WH-1000XM3 to adapt to whatever situation you're in. What is disappointing though is the ‘Focus on Voice' mode, which is meant to filter in the voices of people around you, but ends up muffling and distorting them. 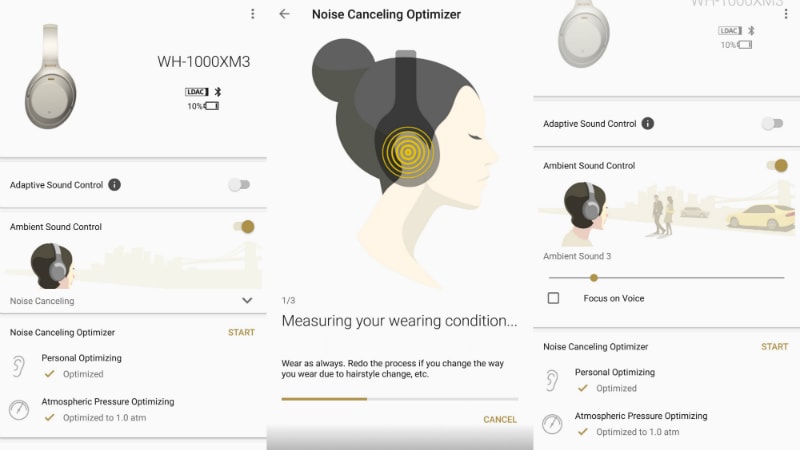 The Sony Headphones Connect app shows you the battery level as well as the streaming codec in use, and lets you toggle Adaptive Sound Control, which uses your phone's sensors to detect whether you are still, walking, running or in a vehicle, and changes the level of noise cancellation accordingly. You can also manually customise the level of ambient noise you want to let in, which is a particularly useful feature.

Another setting called Noise Cancelling Optimiser calibrates the noise cancellation according to your current altitude, which the company claims improves performance in flight. We didn't have the chance to test these headphones on a plane, so we can't say for sure how much of a difference it actually makes, though we've had good experience with this feature on the Sony WH-1000XM2.

There's also a surround sound mode that lets you simulate the effect of audio being played within an arena, concert hall, etc, and a feature called Sound Position Control, that lets you set the direction from where you want the music to play (left, right, back, etc). We didn't find these features to particularly useful and they came across as gimmicks.

Setup is quite easy thanks to the presence of NFC, the sensor for which is embedded in the left ear cup. Connectivity was rock solid during our review period. However, the Sony Headphones Connect app took its own sweet time to recognise the headphones while paired with our Android smartphone. The WH-1000XM3 can remember up to eight paired devices but can stream content from only one at a time. You have to disconnect the active one in order to listen to music or take calls from another.

Unlike the Bose QC35 II, which only supports the SBC codec, the Sony WH-1000XM3 supports high-resolution audio codecs such as aptX, aptX HD, and even LDAC, which can transmit audio at a theoretical maximum of 990kbps, much higher than SBC's theoretical maximum of 356 kbps. Sony's proprietary DSEE HX technology is also on board, and promises to upscale low-quality compressed music files to ‘near-high-resolution audio'.

The headphones sound best while using an Android device that supports the aptX HD or LDAC standard. However, even on an iPhone, which uses the AAC codec, the sound quality is nothing to scoff at. According to Sony, the new QN1 chip not only improves noise cancellation but boosts sound quality thanks to 32-bit audio signal processing and a high-quality DAC with amplifier functionality. 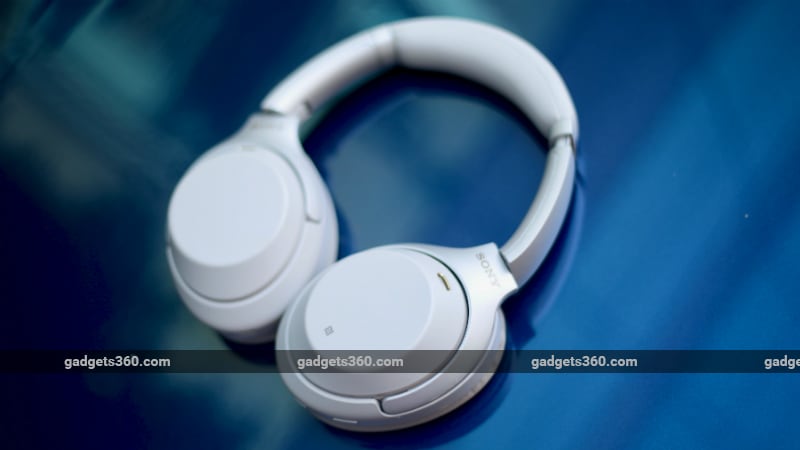 Let's get one thing clear though, the WH-1000XM3 is not a neutral pair of headphones, which many audiophiles would prefer. However, that does not mean that the sound is sub-par. On the contrary, these headphones sound rich, detailed and lush, with a wide and open soundstage. The low-end is pronounced, but the bass is tightly controlled and punchy. The mids are natural and engaging, and the high-end is extremely crisp and detailed with no sibilance or harshness to be found. The clarity, resolution, and instrument separation are all stellar, and the the surprisingly open and spacious soundstage — which is not often seen in closed back earphones — is the cherry on the cake.

The WH-1000XM3 can also be used with legacy devices like an iPod Classic with its auxiliary cable, using the 3.5mm headphone socket at the bottom of the left earcup. You can of course also use the cable with the bundled airplane adapter to use the earphones on a flight.

As long as there is some charge left in the earphones, you can still use noise-cancelling with the wired connection. However, without a Bluetooth connection you miss out on some of the advanced features that the Sony Headphones Connect app offers. When the battery dies, the headphones work in passive mode and noise cancellation stops working. Audio performance is also not the same, as the digital signal processing that is applied when the headphones are powered up is bypassed.

Call quality through the built-in microphones is also quite impressive. Noise cancellation is disabled while you're on a call so you can hear yourself speak, which is quite important.

Verdict
The WH-1000XM3 impressed us with its sound quality, comfort, sleek and lightweight design, stellar battery life, and rock solid connectivity. The sound is lush, warm, and detailed, and the noise cancellation is not only stellar but also highly customisable. Some of its features do come across as gimmicky though, and the inability to stream audio from multiple devices without having to disconnect and reconnect each one is a little disappointing.

However, these issues are not dealbreakers by any means. To put it simply, the Sony WH-1000XM3 is the ideal pair of noise cancelling headphones, and is well worth the price it commands. Bose had better start looking over its shoulders.

product Sony WH-1000XM3 features 40mm drivers, a claimed 30-hour battery life, and support for high resolution audio codecs. Is it worth its Rs. 29,990 sticker price? We review to find out. 4.5 out of 5 stars