Sony announced a bunch of new products at its pre-IFA press conference, and among them was its latest flagship pair of headphones, the WH-1000XM3. This is an iterative update to the WH-1000XM2, which happens to be one of the best pairs of active noise cancelling headphones in the market right now. We had a chance to audition it at Sony's booth at IFA 2018, and here are our initial impressions.

At first glance, the new model looks strikingly similar to its predecessor. There are some noticeable aesthetic differences such as gold accents for the logo and around the cutouts for the microphones on the ear cups, but apart from this, it looks the same. However, once you put on the WH-1000XM3, it's easy to tell the little ways in which improvements have been made.

The first is the weight, which is now 20g less than the old model. This might not seem like much but if you wear a pair of headphones for a long time, such as on a flight, it makes a huge difference. The Bose QC35 II is still lighter at 240g but this is a step in the right direction for Sony. Another area in which we felt the previous WH-1000XM2 skimped a bit was its ear cups, and that has been addressed too. The ear cups on the WH-1000XM3 are a lot softer and plusher, and offer better coverage.

Best Bluetooth Earphones and Headphones You Can Buy in India

The headlining feature of the WH-1000XM3 is the new QN1 processor for noise cancellation. Sony claims that it offers around four times better performance than before, which is a strong claim considering that the previous model was already very good. What better place to test noise cancellation performance than on a busy trade show floor, and upon putting on this pair of headphones, the chatter of people around us immediately died out. Some faint ambient sound was still present, but it wasn't distinct enough for us to even tell what was going on around us, if we closed our eyes.

Sony had the WH-1000XM3 paired with a smartphone that had some preloaded music on it. For some reason, it was paired using the SBC codec instead of the higher resolution codecs that it supports such as aptX, aptX HD, or even LDAC. Still, some of the tracks that we listened too sounded good, with very good staging, punchy and deep bass, and a detailed mid-range. On paper, the WH-1000XM3 isn't very different from the model it replaces. It uses 40mm dynamic drivers with a frequency response of 4-40,000Hz, support for the same high-resolution audio codecs, NFC, a claimed 30-hour battery life, and a 3.5mm socket for a wired connection.

It also has the same touch-sensitive pad on the right ear cup for controlling the volume and music playback, and a single button for switching between noise cancellation modes or calling up Google Assistant. The WH-1000XM3 has a USB Type-C port for charging instead of Micro-USB, which Sony claims has reduced the time taken to fully charge the headphones by an hour. The version of Bluetooth used has also been bumped up to 4.2. 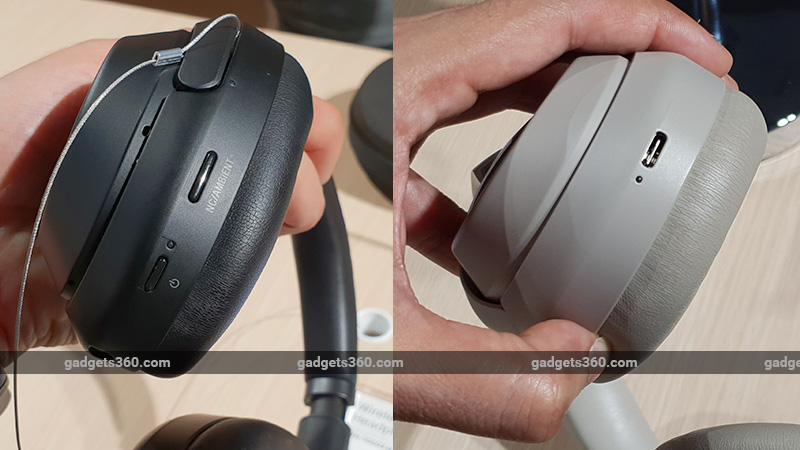 The WH-1000XM3 supports Google Assistant out-of-the-box, and you can change the function of the noise cancellation button to summon Assistant through the Sony Mobile Connect app. However, in doing so, you'll lose the ability to change noise cancellation profiles, which is an unfortunate tradeoff. We could understand this compromise on the previous model, which got Assistant support via a software update after shipping, but for the new one, why not simply have a dedicated button from the get go?

The Sony WH-1000XM3 is priced at $350 (roughly Rs.24,000) and will be available in some countries staring this month. It's not clear when Sony will launch it in India, but when it does arrive, we expect it to retail around outgoing model's current MRP, which is Rs. 30,990.

In the short time we were able to spend with the Sony WH-1000XM3 we can confidently say that it is lighter and more comfortable to wear, making it more of a competitor to the Bose QC35II in that department. The new noise cancellation chip seems to work really well too, but we'll need to do a side-by-side test to know how much better it really is. Sony has once again upped the bar in this segment, and we're curious to see how Bose and Sennheiser respond.

Roydon Cerejo Email Roydon Roydon Cerejo writes about smartphones and laptops for Gadgets 360, out of Mumbai. He is the Deputy Editor (Reviews) at Gadgets 360. He has frequently written about the smartphone and PC industry and also has an interest in photography. With over a decade of experience covering the consumer technology space, he is also an avid sci-fi movie and TV show geek and is always up for good horror flick. Roydon is available at roydon@gadgets360.com, so please send in your leads and tips. More
Counter-Strike: Global Offensive Free Edition Launched on Steam
Huawei AI Cube First Impressions

product The Sony WH-1000XM3 promise up to four times better noise cancellation performance compared to the WH-1000XM2, which was already excellent to begin with. We give them a listen at IFA 2018 to see if it's worth the hype.