Sony hit a home-run with its flagship noise cancelling MDR-1000X back in 2016. It even managed to give the Bose QC35 (Review) some stiff competition. Both companies unveiled their follow-up offerings last year, and now that we've reviewed the Bose QC35 II, it's time to check out Sony's new WH-1000XM2, the successor to the MDR-1000X.

This latest model promises better battery life and new features such as an adaptive sound control mode through a companion app. Priced roughly the same as its predecessor as well as the new Bose QC35 II, let's see how Sony's offering stacks up.

The overall design has remained pretty much the same as that of the older model, which was very good to begin with. It's available in two colour trims, and we have the black version with us for review, which looks very slick. Build quality is great and the plastics used here are of high quality, which gives the headphones a polished look. There's a stainless steel headband, which offers good rigidity and clamping force when you wear this pair of headphones. It also has decent level of cushioning. The WH-1000XM2 is quite light, at 275g.

Some visible design changes to the new model include white Sony logos on the outsides of the earcups, and a textured plastic rather than synthetic leather on the previous model. The latter change definitely makes the WH-1000XM2 feel a bit less luxurious, but on the bright side, it's less prone to attracting grime and smudges from your fingertips. Like before, the earcups can swivel about, making it easier to wear these headphones around your neck. They also fold inwards for easy storage. 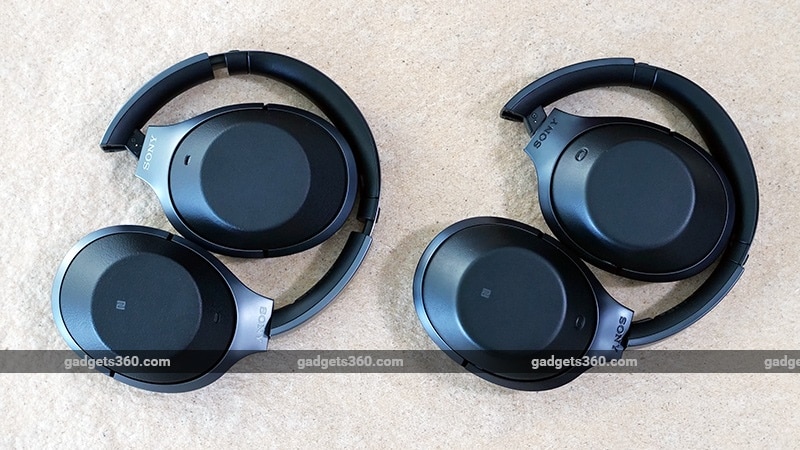 For physical connectivity, the Sony WH-1000XM2 have a 3.5mm socket, which is nice to see compared to the 2.5mm sockets on competing products. There's a Micro-USB port on the right earcup for charging the headphones. On the left earcup, we have the power and noise cancellation buttons, each with its own LED indicator. When the headphones are powered on, you can press the power button once to hear the battery level. A long-press puts them in Bluetooth pairing mode.

The noise cancellation and ambient sound functions are now grouped together under a single button, instead of separate ones like on the previous model. The ambient sound function routes audio from your surroundings into the headphones, which gives you better situational awareness when listening to music. You can also always use the Quick Attention gesture to know what people around you are saying - simply cover the right ear cup with your palm. Doing so temporarily reduces the volume of whatever you're listening to so you can focus on something else.

The circumaural design of the earcups means that they envelope your ears completely. Thankfully, the pads are soft and comfortable even for long durations. They aren't as plush when compared to the Bose QC35 II, but they are comfortable nonetheless. The Sony WH-1000XM2 uses 40mm dynamic drivers which boast of an impressive frequency range of 4Hz to 40,000Hz. NFC is supported for quick pairing with compatible devices. You get Bluetooth 4.1 with a plethora of high-resolution streaming codecs including AAC, aptX, aptX HD and LDAC, apart from the standard SBC codec. The retail box includes a hard-shell carry case, an adapter for in-flight entertainment systems, a Micro-USB charging cable, and a 1.5m stereo cable.

We tested the WH-1000XM2 with an Apple iPhone 6s Plus (Review) and couple of the different Android phones including a Google Pixel 2 XL (Review) and Samsung Galaxy S9+ (Review). NFC makes the pairing process quick, but for devices that don't have it, it's a little long-winded. If you have to pair a second device, you'll need to turn off the headphones and then power them on again.

Another little inconvenience is the fact that you can't have two fully concurrent wireless connections to the WH-1000XM2, which is a shame. You can connect to two Android phones or one Android phone and any other music source, but you'll have to disable either the audio (A2DP profile) or voice profile (HFP) on the Android phone first and then attempt to connect to the second device, since the headphones can only handle an A2DP connection to a single device at a time.

The touch controls work well and are easily accessible, however we did have to do some guesswork when trying to use to Play/ Pause control as it's a little tricky to judge the exact point on the earcup that you need to hit. You can also access your phone's voice assistant with a long-press of the same button. Sony advertises on its website that the WH-1000XM2 will soon be compatible with Google Assistant, just like the QC35 II, which is good news. 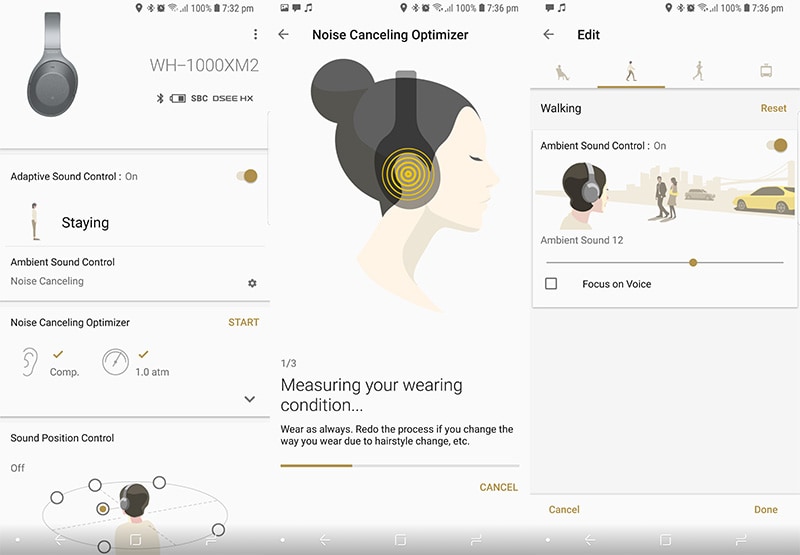 All the new features can be accessed thorough the Headphone Connect app, which is available for Android and iOS. The app shows you the battery level, what sort of streaming codec is in use, and the advanced sound features. Adaptive Sound Control is probably the most interesting and useful of the lot. It dynamically changes the level of noise cancellation and ambient sound to suit your activity at any time, by using your phone's sensors and GPS to detect whether you're still, walking, running, or in a vehicle. We found it to work fairly accurately most of the time. When profiles switch, you're notified with an audible ‘bong'. Each of these profiles can be customised too, depending on how much ambient sound you wish to hear in each situation.

The next new feature is the noise cancelling optimiser, which calibrates noise cancellation based on your current altitude and ambient sound. You can do this through the app or directly on the headphones by long pressing the NC/ Ambient Sound button. We didn't have the chance to test this out at a high altitude, like when on a plane, so we can't say for sure how much of a difference if it actually makes.

Sound Position Control lets you set the direction from where you want the music to play (left, right, back, etc), but we didn't find this particularly useful. There's also a surround sound mode which lets you simulate the effect of audio being played within an arena, concert hall, etc, which sort of works well. For both these latter modes, the app switches the Bluetooth connection priority to ‘Stable Connection' from the default ‘Sound Quality', which in turn drops you down to the basic SBC streaming codec. Finally, there's also a toggle switch to enable DSEEX HX, which up-samples compressed audio files. We didn't notice a very big difference in our music with this enabled. 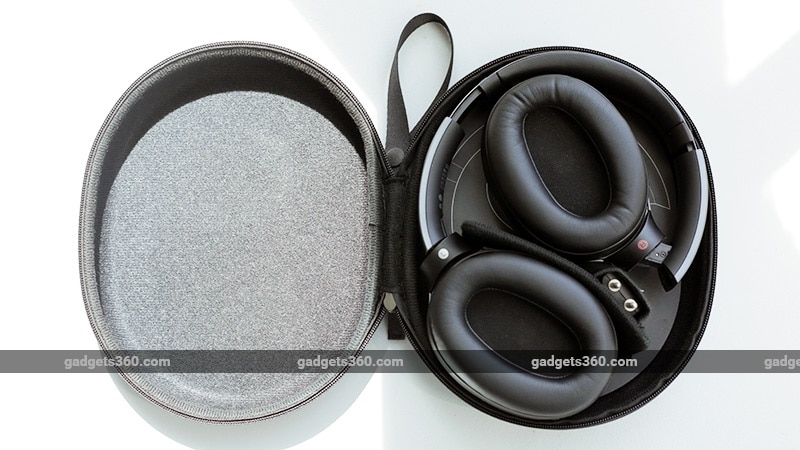 The noise cancellation is very effective and does a good job at blocking out persistent ambient sound. We used it during our regular train commute to work and back, and the WH-1000XM2 managed to block out the clatter of the train wheels as well as most other noise fairly well. This pair of headphones is also great in an office environment when you need to focus on your work. However, it does tend to leak sound a bit when the volume is above 70 percent, which is audible to the person sitting next to you if you're in a quiet workspace.

Audio quality is excellent for wireless headphones. The soundstage feels a bit wider compared to the older model, while the crisp highs, punchy bass, and good detail in the mid-range are all retained. The volume level is also very good, and in most cases, we found the 70-80 percent mark to be loud enough. The dynamism in Daft Punk's Get Lucky was portrayed well, and bass was tight and controlled in tracks like Killing Strangers by Marilyn Manson. Call quality through the built-in microphone was also good, and noise cancellation is disabled temporarily while you're on a call so you can hear yourself speak and don't end up yelling.

The WH-1000XM2 is rated to last 30 hours on a single charge, and we easily managed to match Sony's claim. In fact, we managed to go beyond 30 hours in total over the course of a week, with Adaptive Noise Cancellation enabled most of the time. Charging the headphones takes roughly four hours, but a 10-minute charge gives you about an hour's worth of usage.

Verdict
The Sony WH-1000XM2 is yet another stellar pair of noise cancelling headphones. It takes all the things that made the original MDR-1000X great and adds some useful features, at roughly the same price of around Rs. 30,000. It might not completely beat the Bose QC35 II in terms of comfort and ease of use, but when it comes to audio quality and the number of useful features, the WH-1000XM2 is definitely a step ahead.