Sony recently refreshed its audio lineup in India with three new Bluetooth speakers and six pairs of wireless headphones. We have already reviewed the Sony WI-C300, which is the company's most affordable pair of Bluetooth earphones to date. Now, we have the SRS-XB41 in for review, which is IP67 dust- and water-resistant and loaded with features designed to breathe life into parties.

The Sony SRS-XB41 is priced at Rs. 16,990 but can be found for around Rs. 14,500 online. We were quite impressed with the SRS-XB40's powerful sound and battery life. Does the XB41 improve upon its predecessor? Let's find out.

The XB41 is quite bulky and heavy for a portable Bluetooth speaker. The entire unit has a fabric finish which not only looks premium but prevents the accumulation of dust. The build quality is top-notch and the SRS-XB41 feels well worth its Rs. 16,990 price tag. The front is clean and devoid of any buttons. There is an LED strip that runs along the top and bottom and wraps around the sides.

On the top of the unit, you will find the power button, Bluetooth pairing button, and playback and volume controls. There is also a button that triggers "Live mode", which artificially increases the soundstage. These membrane buttons are hard to press and have little to no travel.

As the speaker is rated IP67 for dust and water resistance, the inputs are protected by a flap at the back with a rubber gasket. There is a Micro-USB port and a DC input, both of which can be used to charge the speaker, although the latter option is much quicker. Additionally, there is a 3.5mm socket and a USB port through which you can use the speaker to charge your smartphone. 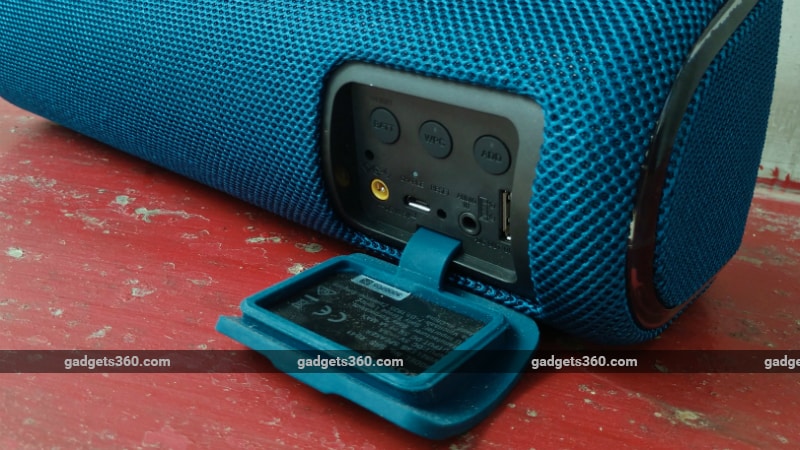 The flap also covers three additional buttons; one to check the battery status and trigger the lights, one to link another SRS-XB41 so you can listen to music in stereo, and one labelled 'WPC' which allows you to daisy-chain up to 99 of these speakers together. Sadly, we did not have multiple units on hand to test this feature.

The Sony SRS-XB41 supports Bluetooth 4.2 as well as NFC for quick pairing with a compatible device. Just tap a compatible phone on the NFC logo at the top and you are good to go.

Before we examine the sound quality in detail, we have to talk about the multitude of 'party-friendly' features that Sony has crammed inside this device. The LED lights can pulse in tune with your music, and in addition, the two 58mm drivers inside the enclosure also light up.

Everyone who saw the lighting effects was enthralled at first, but got tired of them soon enough. We can imagine this being a big hit at parties and nights out, but they are too attention-grabbing for day-to-day use. For those who prefer their speakers to keep a low profile, the lights can be disabled by long-pressing the battery button at the back. We found it odd for such a prominent feature to not be easier to control. The lights can also be managed via the Sony Music Centre app, which is hard to use and has a clunky interface.

The Party Booster function is also interesting. When turned on, you can tap the speaker to add a sound effect to whatever music you are listening. Hit it from the front, sides, top or bottom, and it produces different sound effects. While this feature is fun and allows you to become a make-believe DJ, it does comes across as gimmicky.

Then there is the Live Mode. This adds a 3D effect to music and artificially widens the soundstage. To give credit where it is due, the feature does audibly spread the sound across the room. However, it adds a considerable amount of echo and basically kicks the mids out of the sound mix. As a result, music sounds absolutely dreadful.

Sound-wise, the SRS-XB41 is decent but there isn't a lot to write home about. The bass is tight and punchy, and does not hijack the sound mix entirely, but critical listeners will still find it a bit excessive. The soundstage (with Live Mode off) is also wide and open and the maximum volume is enough to fill even large rooms with sound. The mids are repressed and the level of detail you get is poor. 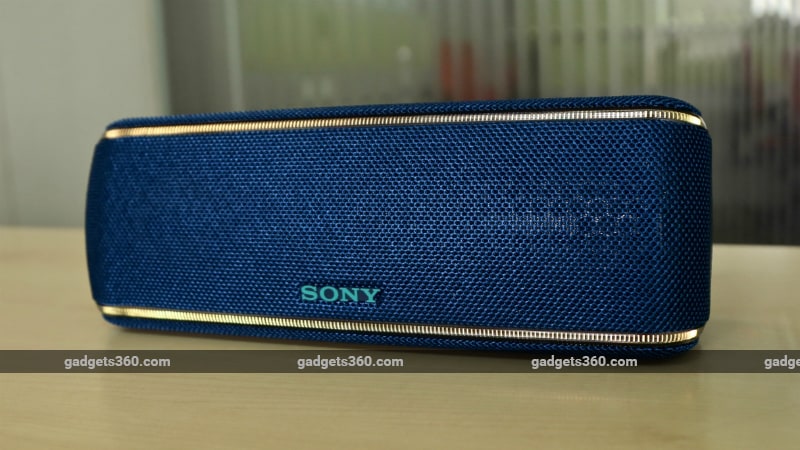 This lack of clarity becomes evident in densely layered tracks such as Radiohead's Paranoid Android and John Mayer's Gravity (Live), in which all the guitars just merge into one another. The highs are a bit of a mixed bag as well. While not as repressed as the mids, the highs do tend to get screechy and sibilant at high volumes. You can get better sounding speakers without any of the aforementioned frills such as the JBL Flip 4 and Ultimate Ears Boom 2 for less money.

The SRS-XB41 supports the high-quality LDAC codec, which is now widely available in multiple Android smartphones with 8.0 Oreo. This means you can stream music at the highest bit-rate currently available. This does help clarity to an extent and boosts the mids (learn more about Bluetooth streaming codecs like SBC, AAC, aptX, aptX HD and LDAC). Call quality is average with the usual caveats that Bluetooth speakers entail - hollow sound and a slight echo on the receiver's end.

Battery life is stellar. Sony claims 24 hours with the lights and all party-focused features disabled. We got around 18 hours of use on a single charge with the lights enabled for around 30 minutes in total, and with music playing at around the 60-70 percent volume level. We also demoed the Live Mode and Party Booster features for around 10 to 15 minutes.

A full charge using the included DC adapter took around 4 hours. The speaker can also be charged using a standard Micro-USB charger, but it would take significantly longer.

Verdict
The Sony SRS-XB41 is waterproof and has terrific battery life. The LED lights and various party modes can be considered gimmicky, but help the speaker stand out from the crowd. However, the sound quality is a little bit underwhelming. While the bass is punchy and crisp and the highs are above average, the mids are repressed, and the sound that this speaker produces lacks clarity and detail.

The SRS-XB41 is a great option for party animals and those who value extravagance and volume over sound quality. It does not sound bad per se, but similarly priced options such as the JBL Flip 4 and Bose Soundlink Mini 2 deliver better detail and clarity.

product The Sony SRS-XB41 is IP67 dust- and water-resistant Bluetooth speaker that's loaded with features. But is it worth a buy? Read our review to find out. 3.5 out of 5 stars