The Sony HT-Z9F comes with a wireless subwoofer

You might not be inclined to spend a lot of money on a soundbar, especially if you haven't spent much on your TV. However, if you're keen to turn your living room into a full-fledged entertainment centre, you might want to bump up your budget and invest in a good audio system. Although the screen is the heart and soul of any entertainment setup, it's important to also invest in good sound for the complete experience.

We would always recommend a proper surround sound system if you have the space for it, but when space, positioning, or cost are issues, you might want to look at a soundbar. If you've spent a couple of lakh rupees on your TV, an entry-level soundbar simply won't cut it. You need a premium option, such as the Sony HT-Z9F which we're reviewing here.

Priced at Rs. 62,990, the Sony HT-Z9F is a premium soundbar that costs more than a typical fully-equipped 55-inch 4K TV. It's feature-filled and meant to be used with high-end TVs. The 3.1-channel soundbar comes with a dedicated wireless subwoofer, and promises the sound quality of a proper surround sound system. Is it worth spending over Rs. 60,000 on this Sony soundbar? Find out in our review.

We recently reviewed the Sony HT-X8500 soundbar, which costs half the price of the HT-Z9F. While that model is well-equipped for the price, the HT-Z9F does offer a fair bit more for the additional money, the most important of which is a separate subwoofer for bass, in addition to the three-channel bar.

The bar speaker of the Sony HT-Z9F is 1m long — a little less than the typical width of a 49-inch TV — and has the front left, centre, and front right channels built into it. The subwoofer is a large block that is ideally positioned just to the side of the TV, and connects to the bar speaker wirelessly. You do of course have to plug the subwoofer into a power outlet, but the lack of interconnecting wires meant that there's a bit more flexibility in terms of where to position the subwoofer.

Both the bar speaker and subwoofer look rather plain, but the understated design has a sense of elegance to it which we appreciated. The finish and textures of the components of the Sony HT-Z9F are tasteful without being too attention-grabbing; a soundbar is meant to be about the sound after all, while the TV screen is what you should be looking at.

The back of the bar speaker has the ports — two HDMI In ports, one HDMI Out port (which supports HDMI ARC/eARC), one USB port, one analogue input (3.5mm), an optical Toslink input for digital audio, and an Ethernet port for Internet connectivity. The soundbar also supports HDMI CEC, which lets you use a single remote to control your entire setup.

There is Wi-Fi 802.11n and Bluetooth 4.2 connectivity. The Sony HT-Z9F supports the LDAC Bluetooth codec, apart from the SBC and AAC codecs. Standard audio format support on the Sony HT-Z9F includes various Dolby formats up to Dolby Atmos, DTS formats up to DTS:X, and Sony's own Vertical Surround Engine, which is said to upscale all sound to virtual 7.1.2-channel surround sound.

If you have any Alexa-enabled devices at home, you can also use these to communicate with the soundbar. Additionally, the Sony HT-Z9F soundbar works with Google Assistant using the Chromecast audio standard, and supports Spotify Connect to stream music over Wi-Fi. 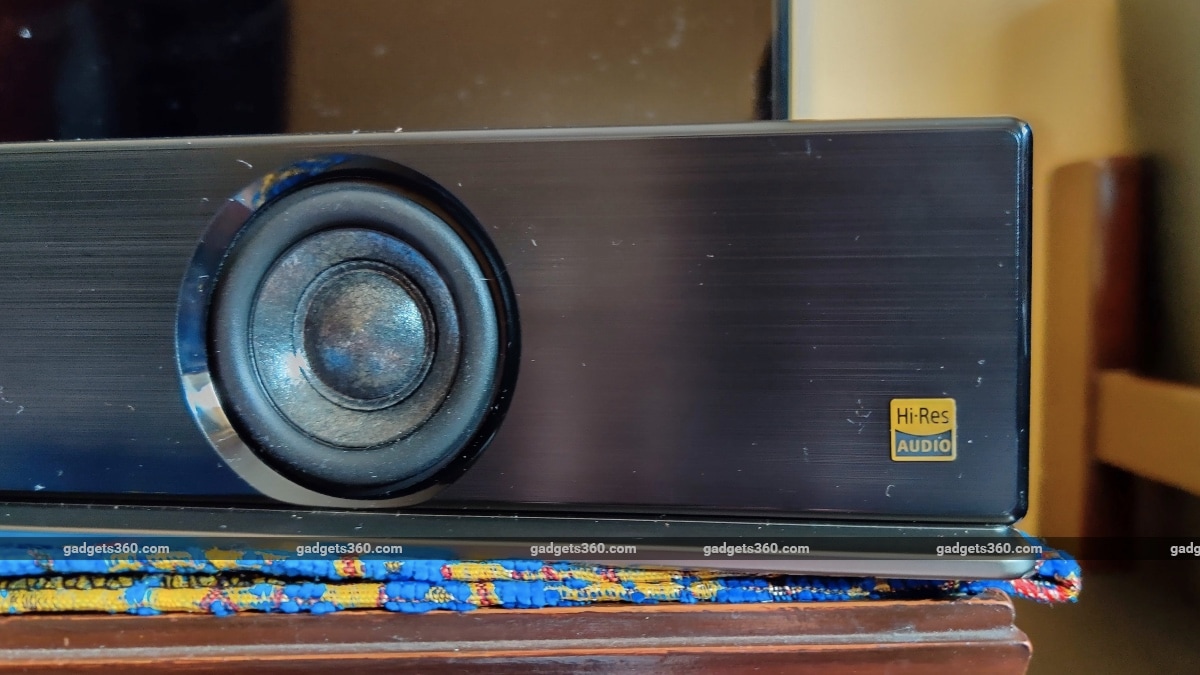 The Sony HT-Z9F is best connected to your TV or home entertainment system using HDMI, as this allows for all of its features and capabilities to be put to use, such as 4K, HDR and Dolby Vision passthrough. Apart from its core functionality as a sound system for your TV, the Sony HT-Z9F can be used as a standalone speaker, which connects wirelessly using Bluetooth or Wi-Fi to source devices. It also has built-in Chromecast for audio, letting you cast from compatible audio apps on a smartphone or tablet.

While the Rs. 62,990 price tag gets you the basic Sony HT-Z9F package with the bar speaker and subwoofer, you can also add the optional SA-Z9R wireless speakers, which are priced at Rs. 10,990 and function as rear satellites. This pair of speakers needs to be connected to power (each needs to be connected to its own power socket), but connects wirelessly to the Sony HT-Z9F just like the subwoofer. Although you don't strictly need these, they might be a good addition to the system if you can bump up your budget a bit and find the space to position and plug them in.

The point of a soundbar is to sound better than your TV, while occupying less space and being easier to install than a proper surround sound system. The Sony HT-Z9F does all of that capably, making your TV shows and movies sound not only louder but also sharper, more detailed, and much more enjoyable. We used the Sony HT-Z9F with the MarQ by Flipkart 43SAFHD TV and an Amazon Fire TV Stick 4K, connected using HDMI. 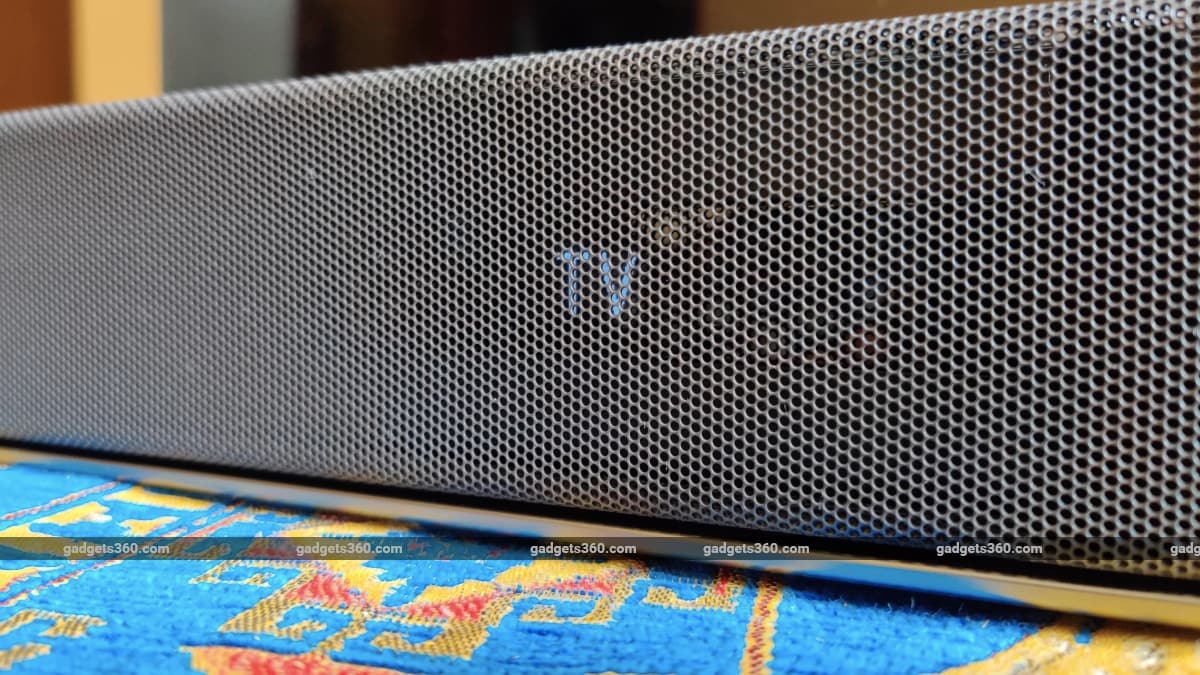 We started out using the soundbar and subwoofer individually, without connecting the SA-Z9R speakers. Apart from the obvious boost in volume compared to the output of the TV alone, we could also immediately hear a huge difference in sound quality when using the soundbar. The Sony HT-Z9F has a wide soundstage thanks to its three front-facing drivers and long shape. We watched a number of movies and TV shows on Netflix and Amazon Prime Video, which streamed with 5.1-channel audio.

While watching Shaft on Netflix, we were able to distinctly tell when certain sounds, such as gunshots or explosions, came from either side of the frame. This was particularly evident when watching Fantastic Beasts: The Crimes of Grindelwald on Amazon Prime Video, which has an exciting — and very loud — opening scene with haunting music, heavy rain, and sharp dialogue. The Sony HT-Z9F soundbar did an admirable job with all the elements of this scene, producing far more engaging audio performance than even the visuals from the MarQ TV.

The Vertical Surround Engine is a feature that we first experienced on the Sony HT-X8500 soundbar, but doesn't seem to be much improved on the HT-Z9F. As was the case before, it only seems to offer some directional sense relative to the screen of the TV itself, rather than virtually recreating actual surround speakers or vertical channels.

The tuning of the soundbar is excellent and ideal for its purpose, with a strong focus on the low-end and mid range. This made for punchy and exciting action sequences, as well as sharp dialogue and involving background scores. The distinct channels also made for excellent sound imaging, where different parts of the sound were able to be heard effectively, without overpowering each other. 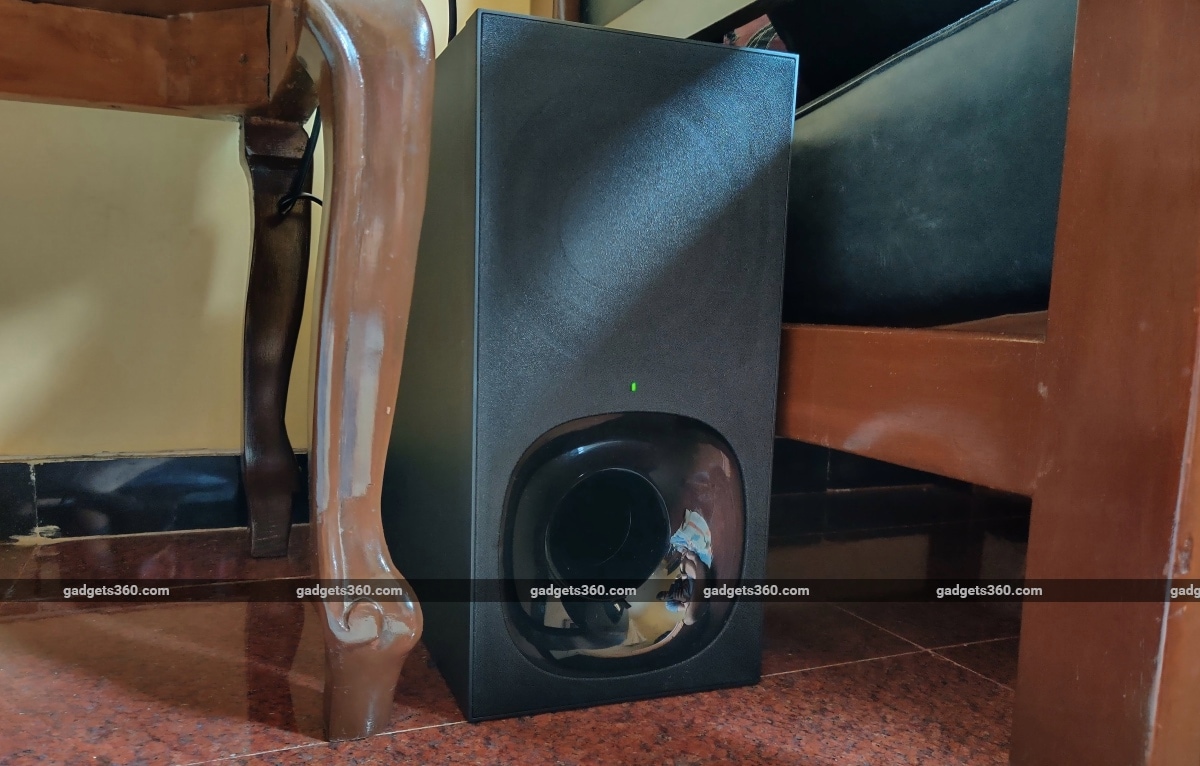 The subwoofer of the Sony HT-Z9F is particularly impressive — it's a large box that does a very good job with the sub-bass frequencies. It heavily contributed to the mood when watching some of the intense monster fights in the final episode of Stranger Things 3, as well as the loud and bass-happy climax of the episode. While we liked the aggression in the bass, users who want it a bit quieter have the option of adjusting the subwoofer's volume for a slightly more sober experience.

Sony also sent us the SA-Z9R rear speakers along with the soundbar, and although we had to put some effort into the initial setup and position-based tuning, they turned the HT-Z9F into a proper 5.1-channel surround sound system. While the wireless connectivity means that you don't need wires running to the soundbar, they are active powered speakers and do each need to be connected to a power source. These optional speakers are the only way to get a proper surround sound experience with the Sony HT-Z9F soundbar, if that's what you seek.

The HT-Z9F speakers are good in their own right, and do wonders with the right content. The background scores and traffic sounds of Manhattan in Shaft gained a new sense of purpose with the rear speakers connected. When we used the Vertical Surround Engine mode with the SA-Z9R speakers, it made a small difference in improving the soundstage, but took away some of the sharpness and directional tuning.

We tried the Chromecast functionality of the Sony HT-Z9F with YouTube Music and Poweramp, and it worked well for the most part with a clear and stable stream. We only had issues when adjusting the volume, which took a few seconds to respond to commands from the remote or the smartphone we were casting from. This often led to the volume suddenly getting too loud because we had tapped repeatedly, and then taking too long to reduce back to normal levels.

We streamed Bluetooth audio from an Android smartphone and saw that the soundbar used the LDAC codec. Sound quality was impressive for a speaker system with a 3.1-channel setup making for impressive responses across the frequency range. Bluetooth audio didn't sound as good as sound played using the Wi-Fi-based Chromecast standard, but the convenience and ease of use made this a more practical option.

Spotify Connect functionality is a useful addition if you use the streaming service, and works exactly how it does with other devices. It's very easy to use, since you don't have to be logged in to your Spotify account on the Sony HT-Z9F; you simply need your smartphone to be on the same Wi-Fi network as the soundbar. It worked as expected for us, and sound quality was decent as well. 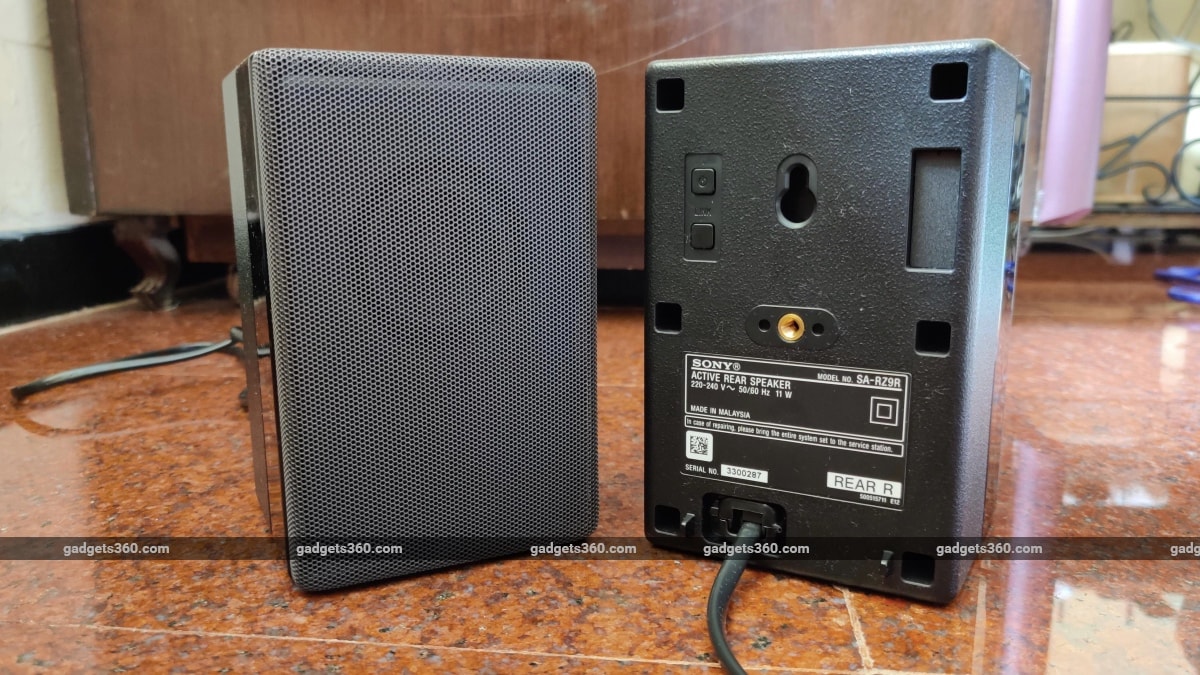 The Sony HT-Z9F soundbar is a significant step up from the HT-X8500, but also comes at double the price, making it a bit too expensive even for buyers with big budgets. If you have the money for it though, it's an impressive option in many ways. The wide soundstage, excellent sound imaging, impressive subwoofer, and additional capabilities when it comes to music make it a worthwhile purchase alongside a premium TV.

Although the soundbar is capable on its own, the optional SA-Z9R speakers add true surround sound to make this an excellent sound system for home entertainment. However, finding the space and power points for the two speakers might be tricky, and we feel that it might even be worth considering a traditional 5.1-channel surround sound system instead, particularly considering that this also raises the price to close to Rs. 75,000.

That said, if you are looking for a classic soundbar-subwoofer combination at around Rs. 60,000, the Sony HT-Z9F is worth a look. Like with other Sony products, it's technically up-to-date, sounds like it's supposed to, and will give your home entertainment setup a significant boost in the sound department.