Is this soundbar with Dolby Atmos, DTS:X, and virtual 7.1.2-channel surround sound the ideal companion for your brand new big-screen TV? 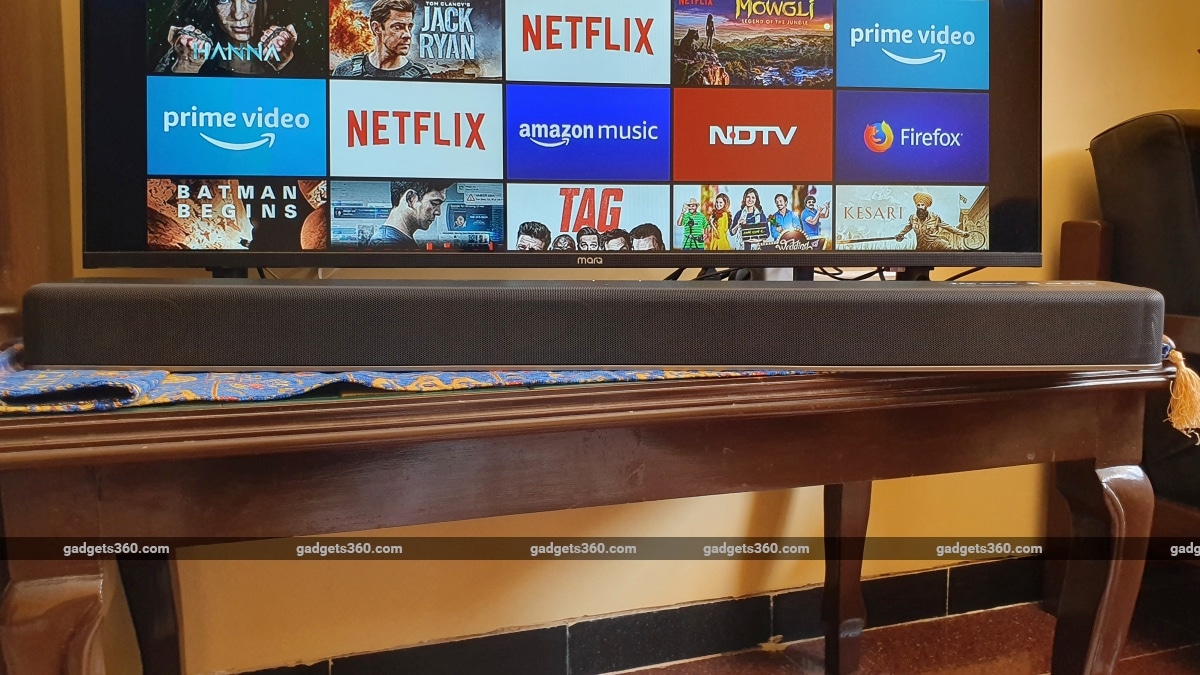 In a lot of our reviews of TVs, we tend to recommend buying a separate audio system because of their inadequate sound capabilities. Even if the TV's audio is good enough, it usually doesn't go beyond basic stereo sound; you'll need a good speaker system to turn your living room into a proper home entertainment centre. However, speaker systems are usually large, expensive, and complicated to install. The solution, for a while now, has been to get a soundbar instead.

Soundbars come in various shapes, sizes, and prices, ranging from under Rs. 5,000 for options like the Xiaomi Mi Soundbar, to premium models such as the EUR 2,499 (approximately Rs. 1,94,000) Sennheiser Ambeo Soundbar. And then there are those in the middle, such as the new Sony HT-X8500 soundbar, which is priced at Rs. 30,990.

On the face of it, the Sony HT-X8500 is a 2.1-channel soundbar with a built-in subwoofer, but it promises a lot more — Dolby Atmos, DTS:X, and virtual 7.1.2-channel surround sound are all on its list of features. We review the Sony HT-X8500 soundbar to find out if it's the ideal companion for your brand new big-screen TV.

Like pretty much every other soundbar available today, the Sony HT-X8500 is a long, narrow slab of a speaker, with two wide-range drivers at the ends and dual subwoofers in the centre. The soundbar is around the same length as a typical 40-inch TV, but that doesn't mean its usability is limited to TVs of that size. It's possible to place the HT-X8500 soundbar on a table in front of your TV, or wall-mount it right below a wall-mounted TV. In either case, the ideal position for the soundbar is right below the TV screen.

If you do place it on the same table or stand as the TV, you'll have to be a bit careful with positioning; the soundbar is quite tall and could potentially block the IR receiver and bottom of the screen. The HT-X8500 has a metal grille covering the drivers and a textured top panel.

There are touch-sensitive buttons for power, source selection, Bluetooth, and volume control, and six indicator lights for Atmos, DTS:X, Vertical Surround, TV, HDMI, and Bluetooth. The former three are sound modes, while the latter three are for the source in use.

There is no display on the Sony HT-X8500 soundbar at all, which is a bit bothersome for a relatively expensive option. The soundbar shows its status and additional information using only its indicator lights flashing in various combinations depending on which settings are tweaked.

We found it hard to remember all the combinations, and often had to refer to the manual to know if we were doing something right when adjusting settings on the soundbar. However, many of these settings only need to be configured once; the soundbar will just work after it's been connected and set up properly with your TV and source equipment.

The Sony HT-X8500 soundbar doesn't have a lot of ports and inputs, relying on the few it has for much of its functionality. You get an HDMI (version 2.2) input, HDMI output (which supports HDMI ARC and eARC), optical audio input, and an input for power. The soundbar allows HDMI pass-through at up to 4K resolution, with HDMI-CEC, HDR, and Dolby Vision support.

For sound modes, the HT-X8500 supports various Dolby formats up to Atmos, various DTS formats up to DTS:X, and its own native vertical surround standard, which is said to upscale sound to a virtual 7.1.2-channel output. Bluetooth 5 connectivity is also supported, but only with the SBC and AAC codecs. The Dolby and DTS formats kick in automatically when you play compatible content and have supported hardware.

While Optical input and Bluetooth are available as connectivity options, we found that the best results were achieved when connecting the Sony HT-X8500 soundbar to our TV over HDMI. The soundbar also has its own remote, which can be used to control power and configure settings.

HDMI-CEC support is a big bonus here. We were able to use our TV and source device remotes to control power and volume on the soundbar, minimising the need to keep swapping remotes. Nonetheless, it's a functional and useful remote in case you need it. The Sony HT-X8500 comes with an HDMI cable included in the sales package.

Let's now talk about the most important part of the Sony HT-X8500 soundbar — how it performs. We used the soundbar with the MarQ by Flipkart 43SAFHD Android TV, connected using HDMI. Apart from content using the TV's built-in media player and smart interface, we also used an Amazon Fire TV Stick 4K connected to the soundbar directly, using the pass-through feature to send video to the TV.

We were able to perceive a difference in sound quality immediately — even something as seemingly soft and insignificant as the clicking sound while navigating through the Fire TV Stick 4K's interface sounded better on the Sony HT-X8500 soundbar. After about a minute of comparing the clicking sound between the TV's in-built speakers and the soundbar, we moved on to an episode of The Tick, streamed on Amazon Prime Video. Again, there was an audible difference in sound quality when using the soundbar, largely because of its excellent tuning for TV shows and movies.

The Sony HT-X8500, like any good soundbar, has a strong mid-range that works very well for dialogue. Peter Serafinowicz's powerful enunciation and voice sounded clear, sharp, and gripping on the Sony soundbar, while even softer voices were clear and loud enough to be heard while retaining their character. The soundbar itself offered not only a volume boost, but also a fair amount of gain to the sound, making it possible to listen more comfortably at higher volumes.

While some soundbars simply offer a boost in volume and a bit of width as compared to your TV, better options promise virtual surround sound. Indeed, Sony promises this with its Vertical Surround mode, which claims to offer virtual 7.1.2-channel surround sound. The numbers indicate seven regular channels (two front, two side, two rear, and one centre) and a subwoofer, plus two additional vertical channels for overhead speakers.

While there is some directional sense to the audio when using this mode, it isn't massive. A more expensive soundbar might offer a much wider soundstage, but the Sony HT-X8500 doesn't quite achieve that level of depth and width, and the idea of vertical surround comes across as gimmicky.

Watching content that is typically tuned for 5.1-channel systems on Amazon Prime Video and Netflix, we were able to feel a small sense of direction to the sound, and the Soundbar was able to project sound as if it were coming from the part of the screen where it was originating.

While watching The Tick, Dangerboat's voice did feel as though it was coming from an overhead speaker system, and is visually represented by a single security camera on the ceiling on screen. Similarly, other dialogue retained its height and direction relative to the 43-inch TV screen we used. The soundstage isn't as wide as a proper 5.1 surround sound system in the same price range would offer, but it was certainly much wider than our TV's sound, in our experience.

Moving on to Triple Frontier on Netflix, we found the soundbar to be decent with action scenes and background scores as well. There was a strong bass response, almost replicating what a dedicated subwoofer would do. While a lot of buyers would prefer a separate subwoofer, the Sony HT-X8500 makes do without one and still delivers decent sound. That makes this mode worth considering if you want bass but don't have the floorspace for a subwoofer.

Background scores sounded clear, without overpowering the dialogue or sound effects in any way. We found that the best results were achieved with the volume turned up; things didn't sound bad at low volume, but the Sony HT-X8500 performed well when given room to breathe, so to speak.

We also played a few surround-sound demo videos, and found that the Sony HT-X8500 was able to do a better job, with more distinguishable sound effects and directional sense while using the DTS:X sound platform. However, these videos are usually made to bring out the best in any audio system, and the Sony HT-X8500 didn't quite perform to that same level with everyday content such as movies and TV shows. Nonetheless, we found its performance to be decent for the price

Finally, we also used the soundbar with Bluetooth, paired to a smartphone. This isn't the ideal use case for the Sony HT-X8500, since its audio tuning is better geared towards video content than music. Strong lows and mids were audible, and its width and volume make the HT-X8500 good for occasional music listening.

However, the sonic signature isn't ideal for this, and Bluetooth itself isn't as good as HDMI when it came to sound quality. However, Bluetooth does offer some flexibility in that you can pair the soundbar with a compatible TV to use it as a wireless external speaker.

Verdict
If you spend up to Rs. 40,000 on a TV, you might not be inclined to spend more than Rs. 15,000 on a soundbar. However, if you have the budget for a better TV, you should also get the right soundbar to go with it. The Sony HT-X8500 isn't a premium soundbar by any means, but it is a decent mid-range option that would go well with most TVs and suit most everyday use cases. However, If you're very particular about sound quality and want the best, the Sony HT-X8500 may not be for you.

At this price, there is a fair amount of competition to the Sony HT-X8500, with brands such as Yamaha, Polk Audio, Bose, and JBL all offering decent products, with or without separate subwoofers. The Sony offering will therefore make sense if you don't have the room for a subwoofer, and is definitely worth an audition if convenience is high on your list of priorities.