Sennheiser has finally cut the cord and launched its first truly wireless earbuds at IFA 2018. Fashionably late to the party, the Sennheiser Momentum True Wireless features 7mm drivers, Google Assistant and Amazon Alexa support, sweat and splash resistance, and a charging case with a USB Type-C port. We spent some time with the Sennheiser Momentum True Wireless, and here's what we think.

The earbuds have a claimed battery life of four hours, which is fairly average for truly wireless earphones. Sennheiser claims that the provided charging case can fully charge the earphones twice, bringing the combined battery life to 12 hours. The fabric-wrapped case is larger than the one Apple ships with its AirPods but is still quite compact and pocketable. The earbuds are held in place with magnets, and the case opens and closes smoothly, without much effort.

The charging case has a USB Type-C port at the back. According to Sennheiser, it takes just 1.5 hours to fully charge the case and both earpieces.

There are no physical buttons, and all operations are touch-based. A single tap on the left earbud pauses music, two taps take you to the next track, and three taps take you to the previous one. A single tap on the right earpiece toggles the Transparent Hearing mode, which filters in a bit of outside sound using the built-in microphones. Three taps invoke Google Assistant or Alexa. Long-presses on the left or right earpiece increase and decrease the volume respectively. 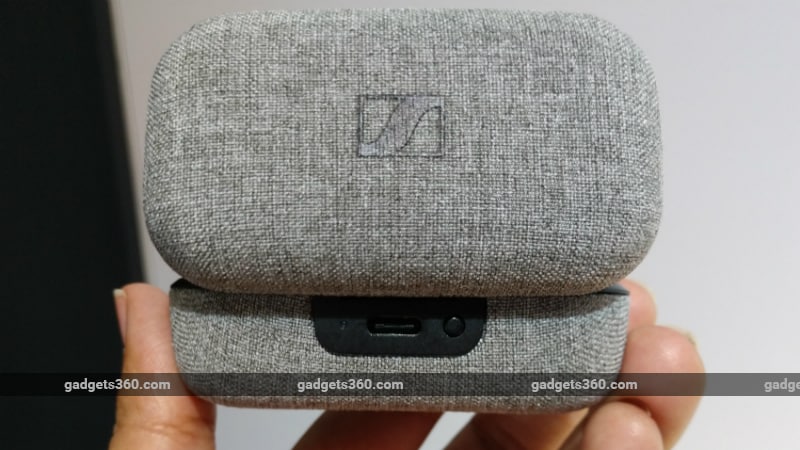 If all this sounds too convoluted, Sennheiser's Smart Control app lets iOS and Android users control, personalise, update, and configure the earphones. The app will be released once the Momentum True Wireless hits the market. In our limited time with the Momentum True Wireless, we found the touch controls fiddly and inconsistent. The earphones failed to register our inputs multiple times.

The moderately sized earpieces are light, and are angled to ensure a good fit. The Momentum True Wireless has 7mm drivers in each earbud and supports the aptX, AAC, and aptX low-latency wireless audio streaming codecs. AptX HD is not supported, which is a bit disappointing.

In the limited time that we had with the earphones, we were quite impressed with the quality of sound. The bass was tight and punchy, and didn't overpower the rest of the frequencies. Mids were expressive, and vocals sounded very natural. Highs were slightly repressed but clear and precise. The passive noise isolation was also quite impressive. We will have to test this pair of earphones in detail to pass a final verdict on sound quality.

Sennheiser told Gadgets 360 that the Momentum True Wireless will launch in India sometime in late November. The India price was not revealed at IFA, but the company did provide a global pricing of 299 Euros (roughly Rs. 24,673). This pair of earphones will be far from cheap, and is also extremely late to the game. Stay tuned for our full review to see if it can compete with the likes of the Bose SoundSport Free, Jabra Elite Active 65t, and of course, the Apple Airpods.