Sennheiser's Momentum line of headphones and earphones generally caters to the lifestyle crowd who like exotic materials and showy designs. Unfortunately, form sometimes tends to take higher priority over function, and that certainly seemed to be the case with the Momentum M2 IEi wired earphones. As striking as they looked, the sound quality just wasn't up to the mark, especially at the premium price of Rs. 6,990.

Today, we'll be testing Sennheiser's recent addition to its Momentum portfolio for 2017, called the Momentum In-Ear Wireless, which is essentially a wireless version of the M2 IEi. With a price tag twice as high as that of its wired brother, we hope Sennheiser has fixed all the issues we experienced. Let's take a look.

When it comes to design and build quality, the Momentum In-Ear Wireless scores big points. The chambers of the earbuds are built from machined stainless steel and have a very attractive glossy sheen. They're light and feature angled ear tips that sit comfortably in your ears without sticking out too much. The earbuds are attached to cables that protrude from the neckband. However, unlike with the LG Tone Active+, these aren't retractable. 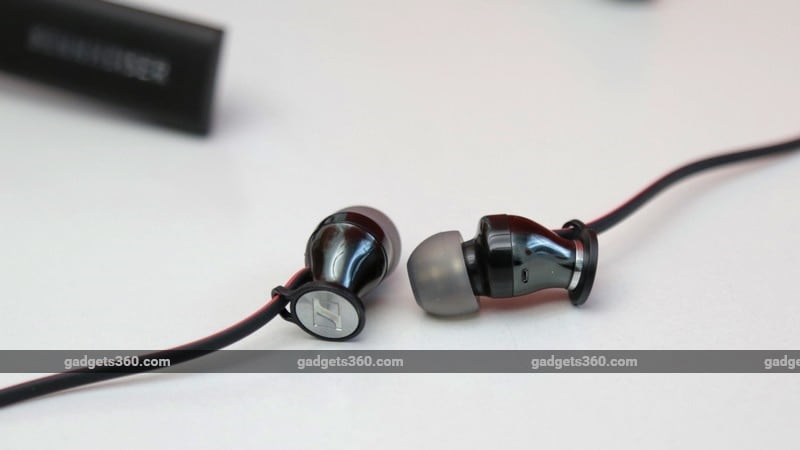 The neckband is equally light and is flexible enough to easily slip on and off. We found it to be very comfortable even over extended periods of time. Sennheiser has used sheepskin nappa leather with exposed red stitching to line the neckband, which looks and feels very nice. The lower left part of the neckband is where you'll find all the buttons, an LED indicator, and the Micro-USB port for charging.

The right side of the Sennheiser Momentum In-Ear Wireless doesn't have any physical buttons or connectors, except for the NFC contact point. The circular power button is easy to locate just by touch, and you can also use it to check the battery level (when there's no music playing) through a voice prompt.

A three-button cluster is used for adjusting the volume level and playing or pausing music. However, it's a bit tough to tell these buttons apart just by feel, especially the middle one. Tactile feedback could have been better too, as these buttons feel a bit mushy. A long press of the ‘Volume Up' button skips to the next track while the same action on the ‘Volume down' button takes you to the previous one. The middle button can be used to answer and reject calls, and a long press activates Siri on iOS or Google Assistant on Android. 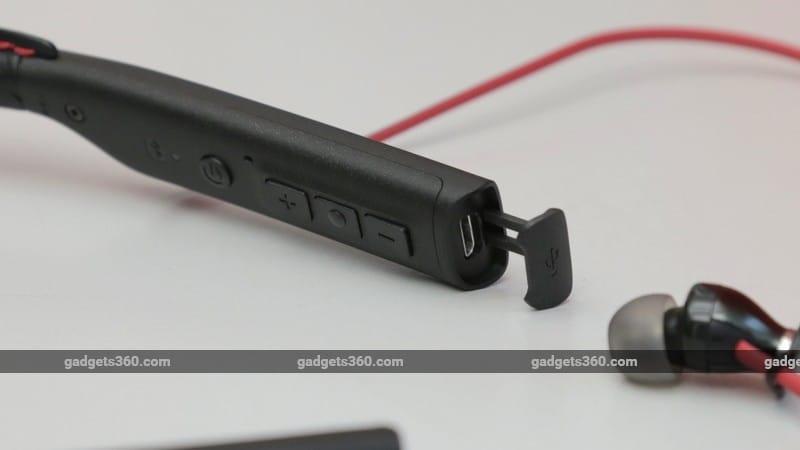 There's a single microphone placed near the cluster of buttons. It does a decent job for phone calls, although we did have instances when the other party couldn't hear us very clearly. Also, if you wear the headphones around a collared shirt, the microphone tends to get blocked. We would have preferred to have microphones on both sides of the neckband to help overcome this. The placement of the Micro-USB port is very convenient and the Momentum In-Ear Wireless also works as a USB headset when plugged into a PC or a Mac, which is a handy capability.

In terms of specifications, the Sennheiser Momentum In-Ear Wireless has a frequency range of 15Hz-22,000Hz and uses dynamic drivers (although the exact size isn't specified). It also supports Bluetooth 4.1 and the high-quality apt-X Bluetooth audio standard. The left end of the neckband can vibrate to alert you to incoming calls and also physical cues for when you power the device on and off.

The device lacks any rating for water or sweat resistance. In the box, you get a hard carry case, extra eartips of different sizes, and a Micro-USB cable.

Setup is easy if you have an NFC-capable smartphone, else you'll have to long-press the power button till the LED light starts alternating between blue and red to initiate the pairing process. You can connect the headset to up to two source devices at a time, but you need to end the connection to the first device (by turning Bluetooth off for instance) in order to switch to the second. Voice prompts are triggered when you turn the headset on or off and check the battery level, and you'll also get low battery warnings. 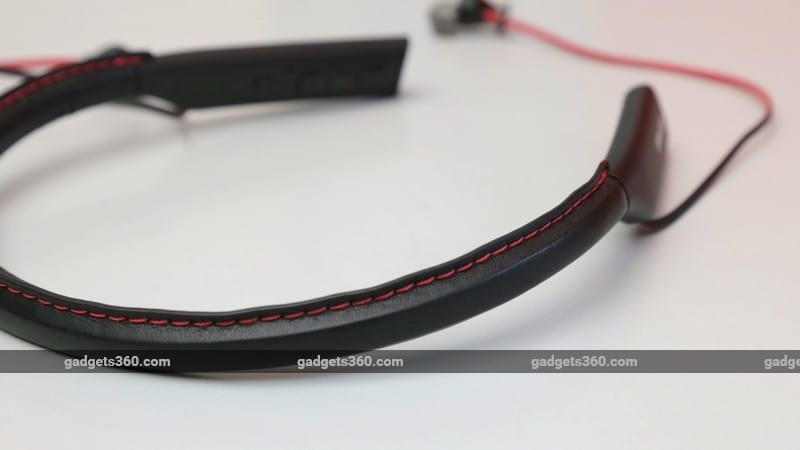 If you're wearing the earbuds when you get an incoming call, you'll hear a custom ringtone through them. However, there's no extended functionality such as the ability to have the name of a caller or contents of a message read out to you. There is an app for iOS and Android called CapTune by Sennheiser, which is essentially a custom music player with equaliser settings for your headphones. Unfortunately audio from other apps is not affected by these settings.

The earbuds are incredibly comfortable to wear, and we felt little to no fatigue even after extended listening sessions. The silicone eartips are of very good quality, and they do a good job at isolating outside noise and don't leak sound even at very high volume levels.

We tested the Momentum In-Ear Wireless primarily with an HTC 10 (Review) and OnePlus 5 (Review), the latter primarily for its support for apt-X. Focus tracks included Somebody To Love by Queen, Tuesday by Burak Yeter ft. Danelle Sandoval, and Linger by The Cranberries. Most of our test tracks were a mix of 16-bit/ 44KHz and 24-bit/ 96KHz files as well as a mix of audio streamed from Apple Music.

The Sennheiser Momentum In-Ear Wireless sounded good right out of the box and didn't really require any breaking in. Sound staging is good although they aren't very open. The one thing that's instantly noticeable is that the treble gets shrill very easily at around 80 percent volume. In Queen's Somebody To Love, the background vocals in the chorus and the cymbals sound piercing. The mids tend to get drowned out a bit due to this, although the earphones hold their ground in the lower frequency range.

When it comes to rock and hip-hop, the In-Ear Wireless delivers excellent tight bass. This is especially noticeable in Burak Yeter's cover of Tuesday. Even at high volumes, the bass is firm without any noticeable distortion which makes it very enjoyable to listen to. The acoustic version of Linger by the Cranberries sounds good but we could have used better separation between instruments. Vocals are clear and the guitar strums are delivered well, but again, the shrill high end tends to rear its ugly head time and again, forcing you to lower the volume.

We tested the Momentum In-Ear Wireless with video playback too and didn't have any issues. Even with devices that don't support apt-X or with streaming music, the In-Ears sound clear. However, as far as good balanced sound is concerned, we prefer the sonic signature of the LG Tone Active+ over this. 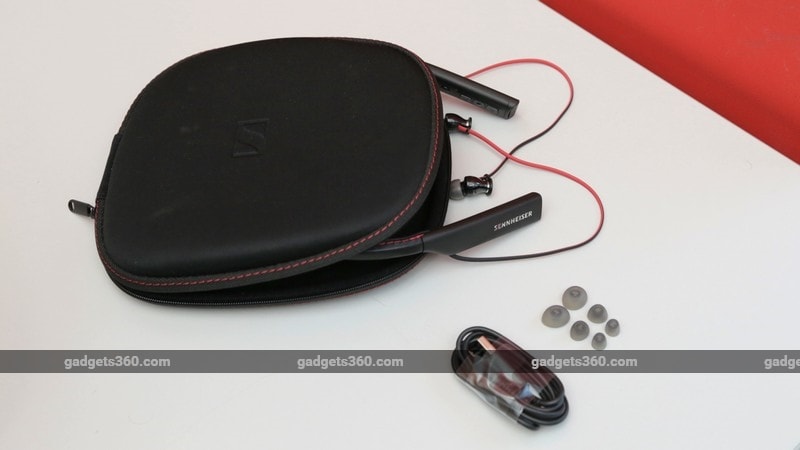 The Momentum In-Ear Wireless has a rated battery life of 10 hours and we actually managed to achieve that plus a bit more - 10 hours and 20 minutes of continuous playback, with the volume level at roughly 80 percent throughout. When the battery level is low, you get a voice prompt every few minutes asking you recharge the headset.

The Sennheiser Momentum In-Ear Wireless is a beautifully crafted headset that looks and feels very premium, as it should, given its retail price. Sonic signature isn't the best, as it has a bias towards higher frequencies which results in an unpleasant shrillness at high volumes. The mid-range sometimes gets lost in certain tracks. Bass is handled very well though; it's tight and controlled and never distorts, even at high volumes. Battery life is also very good and we like the little conveniences like NFC and the bundled case.

However, there's no getting around the fact that this is quite an expensive product, even considering the fancy materials used to create it. For this money, we expect audio performance to be spot on, which it sadly isn't. We could have used a second microphone for better clarity during voice calls, and the music control buttons could have been easier to use. In terms of pure value, the LG Tone Active+ is a better option as it's roughly Rs. 5,000 cheaper, is sweat proof, and supports apt-X HD for higher resolution audio files. Sure, it's not built from exotic materials, but it does get the audio bit right.

product The Sennheiser Momentum In-Ear Wireless lives up to the series' premium pedigree, but doesn't quite knock it out of the park in terms of audio performance. 3 out of 5 stars