Although Sony and Bose are currently ahead of the competition when it comes to premium wireless headphones with active noise cancellation, that hasn't stopped other headphone manufacturers from giving the segment a shot. We've seen high-end options from leading brands including Jabra, Skullcandy, Bowers and Wilkins, and Apple in recent months. Now, German audio specialist Sennheiser has gotten into the game, with its latest pair of headphones, the Momentum 3 Wireless.

Also known as the Sennheiser Momentum Wireless (2019), this pair of headphones is priced at Rs. 34,990 - around the same as what the Bose Noise Cancelling Headphones 700 goes for, and a fair bit higher than the asking price of the Sony WH-1000XM3. For this much money though, Sennheiser offers its classic Momentum series design, and promises good sound with active noise cancellation. Does this headset live up to those promises? We find out in our review.

The Momentum sub-brand has been successful for Sennheiser, representing its top-end consumer-grade products when it comes to design and functionality. While the Momentum series can't be classified as audiophile-grade kit, these models have been popular with users for their combination of sound, design, and function. The Momentum 3 Wireless is the third wireless over-ear headset in the series, and sticks to the range's classic styling and design.

The most distinct design feature is the headband, which attaches to the ear cups in a unique way that lets them slide and move around almost independently of the headband itself. This helped us get a secure and comfortable fit, which was particularly important given that active noise cancellation depends on it. However, the size of the headset meant that we usually had to adjust our eyeglasses to ensure the seal was maintained.

There is plush padding around the ear cups as well as on the underside of the headband, for comfort as well as passive noise isolation, and the overall aesthetic is an interesting combination of retro and modern. We did however feel that the headphones looked too big on the head, and they definitely invited a lot of attention. This pair of headphones is significantly less discreet than the Sony WH-1000XM3 and Bose Noise Cancelling Headphones 700.

The hinges are metal while the ear cups are plastic, but despite that, the Sennheiser Momentum 3 Wireless definitely looks and feels like a premium and classy pair of headphones. The ear cups are connected to each other by a cable that runs through the headband, with small parts of it exposed near the ends.

There are physical buttons on the right ear cup to adjust the volume, control playback, and trigger the voice assistant on your smartphone or tablet - Google Assistant, Alexa, and Siri all worked for us. The USB Type-C port and a slider switch are also on the right; the latter is used to control the noise cancellation and transparent modes.

The headset has a mechanism that lets both ear cups fold into the headband. The left hinge also controls the power; the headphones will switch on when folded outwards and off when folded inwards, with no separate power switch. An indicator light on the right ear cup lets you know the power status of the headphones, and also provides visual cues for pairing and charging functions.

The Sennheiser Momentum 3 Wireless headphones also have an auto play-pause function that pauses music when the headphones are taken off, and resumes playback when they are put back on. This worked well for the most part, but the pause function was occasionally triggered even when adjusting the headphones on our head or turning our head to one side. This can be disabled using the companion app - more on that a bit later.

When it comes to specifications, the Sennheiser Momentum 3 Wireless headphones are on par with other high-end options in this price range. The headphones have a frequency response range of 6-22,000Hz, and use Bluetooth 5 for connectivity with support for Bluetooth codecs up to aptX Low Latency. Sennheiser claims that the headphones can run for about 17 hours with noise cancellation on, and we were able to match this figure during our testing. The headphones also support fast charging, with a ten-minute charge claimed to provide 90 minutes of listening time.

Sennheiser has developed an app for the Momentum 3 Wireless headphones, called Sennheiser Smart Control. The app - available for iOS and Android - doesn't do a lot, but it does have a few useful features. These include displaying the exact battery level, letting you set the type of noise cancellation (maximum, anti-wind, and anti-pressure), controlling the transparent hearing mode and equaliser settings, updating the firmware, linking the headphones to the Alexa app for improved voice control, and turning on or off the smart pause function.

We didn't need to use the app much beyond the initial setup of the headset, but it did come in handy when we needed to check the precise battery level on Android. Most useful functions could be controlled on the headset itself. 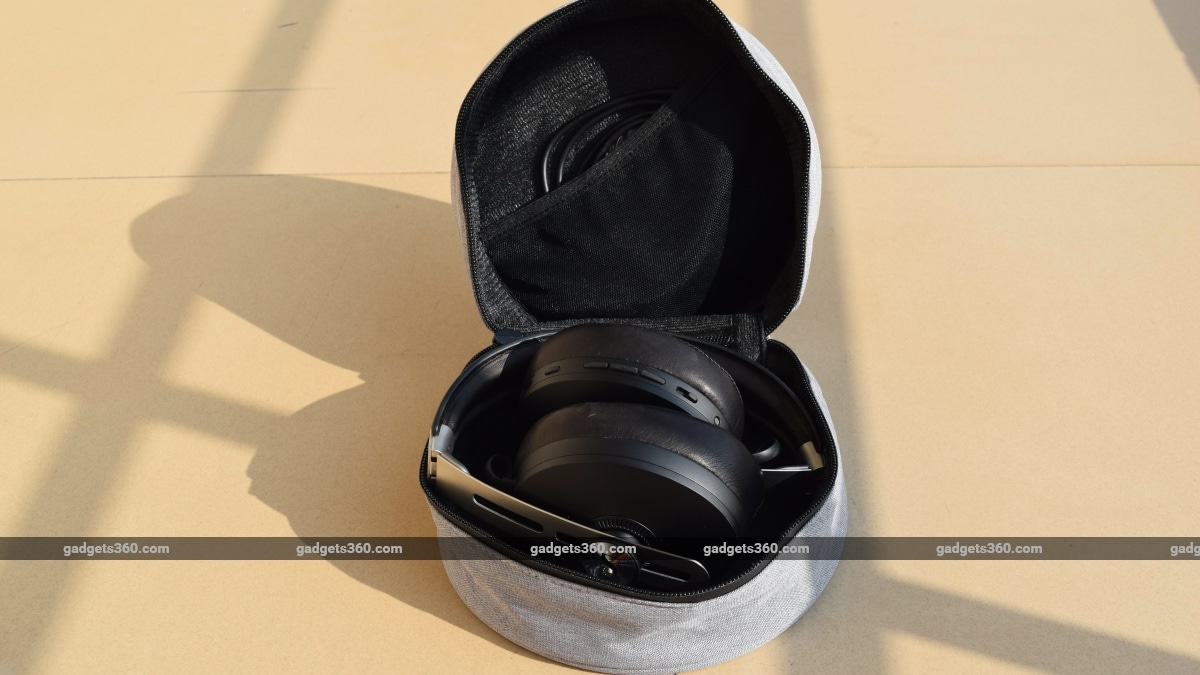 At Rs 34,990, the Sennheiser Momentum 3 Wireless is the among the most expensive pairs of headphones in the segment, priced at a fair bit more than options from Sony, Bose, Jabra, and Skullcandy. While the brand and styling might help justify the price to some extent, the important thing here is performance. Sennheiser does offer a good overall experience, but we aren't convinced that this makes the headphones worth such a premium.

We used the headphones with a OnePlus 7T Pro (Review) for most of this review, with the aptX Bluetooth codec. For sources, we used Spotify, YouTube Music, our collection of high-resolution audio tracks, and Amazon Prime Video. We also tested the active noise cancellation in a variety of environments.

Regardless of whether we listened to streaming music or high-resolution tracks, the Sennheiser Momentum 3 Wireless sounded rich and detailed with pretty much every kind of genre we tried. The size of the ear cups and the general fit gives the headphones an airy feel, but the soundstage wasn't quite as wide and all-encompassing as we've experienced with other headphones in this price range.

The interplay between the left and right channels was impressive though, and the headphones were also very detailed and revealing; this was particularly noticeable in a high-resolution version of 9,000 Miles by Pendulum. This rich track with a lively combination of various instruments and electronic elements sounded particularly clean and impressive with the Sennheiser Momentum 3 Wireless headphones.

The sonic signature is unlike what we're used to with most consumer-centric headphones, but it's also typical of the Sennheiser philosophy, and we've heard this sonic character from other Momentum-branded products such as the Momentum True Wireless earphones as well. We expectedly heard a boost in the low end, with a slight drop in the mid-range and somewhat flat highs. This suited most tracks we listened to, adding a bit of punch and drive to the sound.

Listening to the bass-heavy Traffic by Thom Yorke, the electronic lows and the bass hits of the beat played together well, giving the track a distinct rumbling character that combined well with the detailed nature of the headphones. Moving on to the much more lively Closer by Lemaitre, we liked the laid back nature of the highs and mid-range, while keeping things energetic and aggressive in the dubstep-inspired bass drop.

Noise cancellation on the Sennheiser Momentum 3 Wireless was impressive in most environments. It was particularly effective on flights, almost entirely shutting out the roar of the engines, and was similarly useful for reducing background sound in office and outdoor environments.

However, we felt that the silence was not quite as stark and vacuum-like as it can be with the Bose Noise Cancelling Headphones 700; it almost got there, but the Bose headphones do a slightly better job. We also noticed a lot of sound leakage at high volumes, which was a bit bothersome for people around us. Call quality with the Sennheiser headphones was acceptable, but again not quite up to the standards set by the Bose Noise Cancelling Headphones 700. 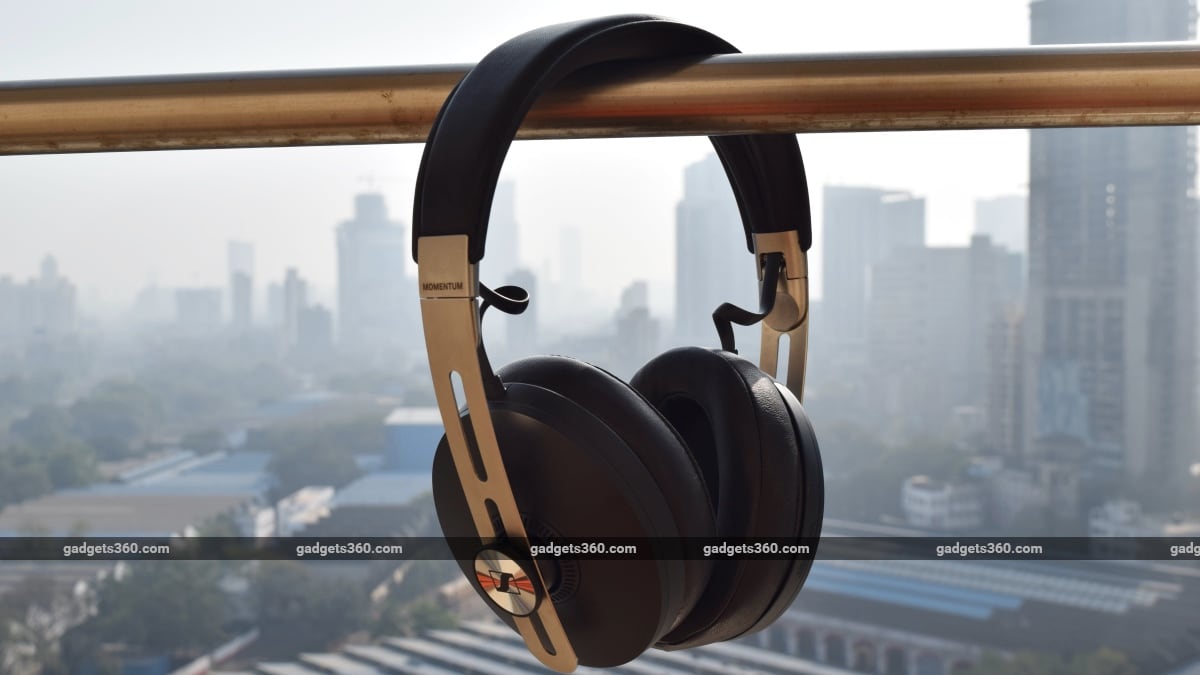 Bose and Sony's dominance over the high-end wireless noise cancelling headphones segment is something we've started to take for granted, but it's good to see other headphone makers offering a challenge. The Sennheiser Momentum 3 Wireless headphones are the closest competitor we've seen this year, and we feel that this pair of headphones needs to be considered alongside the two current champions of the space. We quite liked the Momentum 3 Wireless, largely for its design, comfort, and sound quality.

While active noise cancellation is good, it didn't quite match up to the winning performance of the Bose Noise Cancelling Headphones 700. Battery life, while acceptable, wasn't up to the level we've seen with the Sony WH-1000XM3. However, in all other respects, the Sennheiser Momentum 3 Wireless matches up to the competition, particularly when it comes to the punchy, detailed, and engaging sound.

Perhaps the biggest weakness of this pair of headphones is the price tag. At Rs. 34,990, the Momentum 3 Wireless is the same price as the Bose option, and much more expensive than the Sony WH-1000XM3 (although we do expect to see the WH-1000XM4 launched at around the same price soon). Sennheiser definitely has the reputation and legacy to back its premium pricing strategy, but a lower cost would have helped in this particular case.

That said, if you do want a very good-looking, well-built, feature-filled pair of premium wireless noise cancelling headphones that sound very good, the Sennheiser Momentum 3 Wireless is definitely worth an audition, and absolutely worth considering alongside the current leaders in the segment.

product Sennheiser’s latest premium headset, the Momentum 3 Wireless, is priced at Rs. 34,990. Does it have what it takes to challenge the dominance of Sony and Bose in the wireless active noise cancellation segment? 4 out of 5 stars