The Carvaan is a new Bluetooth speaker released by the famous Indian music label Saregama. As you would expect from such as source, the Carvaan isn't just a simple speaker. It's got a number of interesting features built-in, most notable of which is that it comes with 5,000 classic Hindi songs, which you can listen to anytime you want to, without any Internet connection. The other thing that really stands out is the design of the speaker, which looks like a classic portable radio. While B&O's A2 is a modern and refined take on the concept, Saregama went with a chunky and boxy design for the Carvaan, which is decidedly retro.

The unique look and concept behind the speaker really caught our eye, and we've spent the best part of last seven days using a Carvaan to see how it measures up beyond the striking design. Read on to know whether this speaker is worth your money. 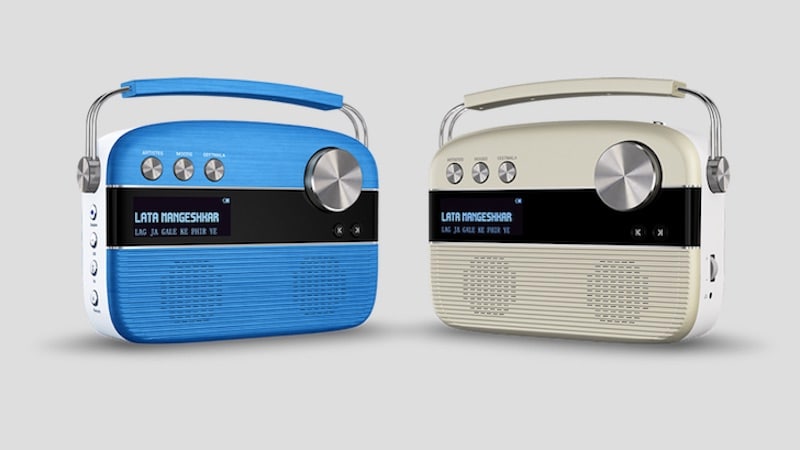 As mentioned earlier, the highlight of this speaker is definitely its design. In terms of specifications, it's a fairly straightforward. The 1.5kg stereo speaker has an audio wattage of 6W - that's 3W to each individual driver, though they're pretty close to each other because of the design, so don't expect wide stereo separation.

The Carvaan supports USB playback, Bluetooth, FM Radio, and there's a Saregama mode which lets you play the stored collection. Saregama is one of the most famous music labels in India, and on its website states that it is the custodian of over half the music recorded in India, with a history that stretches back to 1901. The Radio Geetmala commentary by Ameen Sayani included in the device goes back to 1952.

The look of the Carvaan, as described above, is modelled after a classic portable radio. The plastic finish looks like something that was made in the 70s or 80s in India - there's a couple of large metal buttons on the front fact that let you switch between the stored content modes; and there's a huge and shiny tuning knob like a real radio would have. A black band runs just under this knob, where a real radio would have the frequency details. In the case of the Carvaan, this space is used for a simple LCD display. There's a metal and plastic handle that can be turned out of sight, and on the left, you have four buttons, for the different sources - Saregama, USB, FM, and Bluetooth. 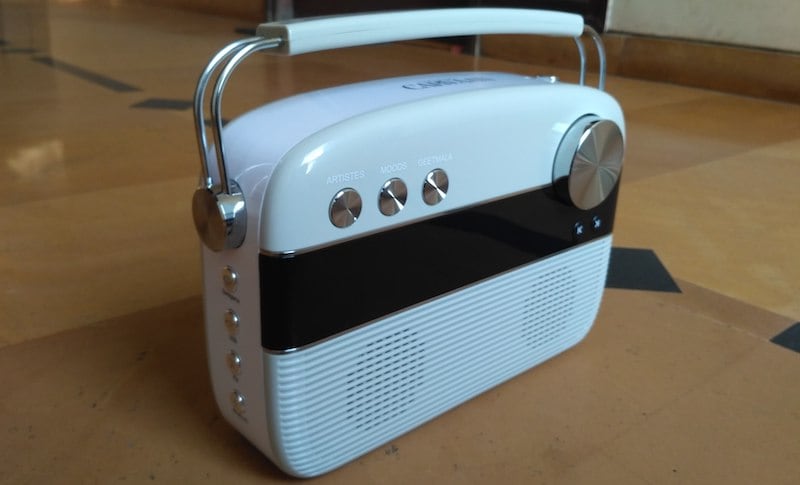 On the right, you have a plastic vertical volume dial, and below that a 3.5mm port you can connect your headphones, if you want. On top there's a big power button, and a small battery indicator light. The lower half of the front face has a simple grille, covering the two speakers, and the back is mostly plain, apart from a USB port (for playing music), Micro-USB (for charging), and a tiny Reset button to reset the device.

You can also press the Moods button to switch between different genres using the tuning knob, and the Artistes button lets you do that for different singers. It's worth noting that the organisation of tracks is a little confusing - for instance, turning the knob moves you from Asha Bhosle to Mohammed Rafi, and if you keep turning the dial you get get Jagjit Singh and then SD Burman. The songs themselves are also not seemingly organised, but it's a minor quibble.

You'll use the same knob to move across tracks on a USB drive, and to tune the FM radio. Using the FM radio is actually a lot of fun. You simply turn the knob to tune through the various frequencies - it's not an analog knob like a real old radio would have, but you still get to experience some of the same feeling, of physically tuning the radio. Many people reading this might never have experienced that, but it was a fun bit of nostalgia for us when testing the Carvaan. 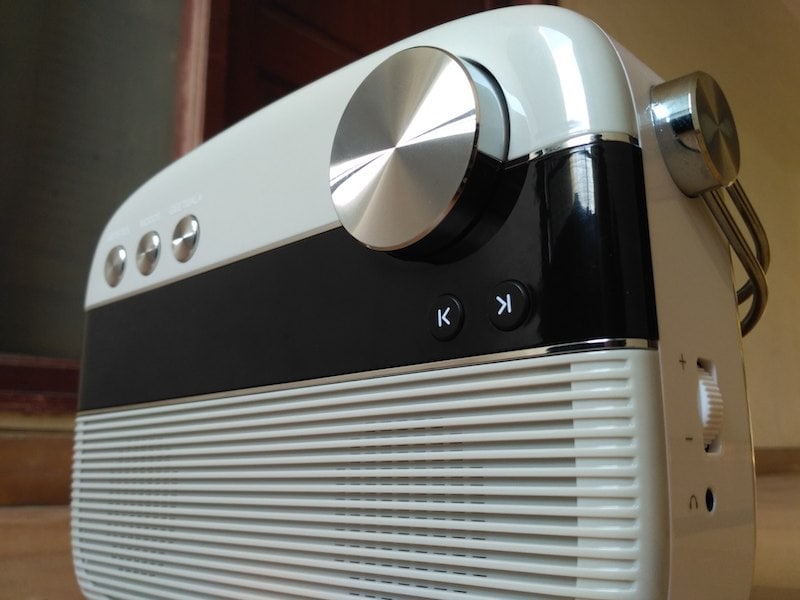 Bluetooth mode goes into pairing right away and is pretty easy to set up and use for anyone who has ever used such a portable speaker. In Bluetooth mode, you can only use the volume dial.

There are a couple of different ways to measure the performance of the Saregama Carvaan. First, there's the question of how good a Bluetooth speaker it is. On that front, it's definitely bulky and heavy, and the battery life - for something this size - leaves a lot to be desired.

The audio quality itself is fairly decent. It works best with the stored music, delivering the classic tones of the old tracks and the radio commentary cleanly and loudly. The speaker is loud enough to carry to the park for a picnic, for instance, and it's very mid-centric, making it good for tracks led by vocals.

Audio playback quality is good overall, but it's more in line with a speaker of around half the price, such as the Xiaomi Mi Bluetooth speaker, although the Carvaan is louder than the Mi speaker. Overall though, you're not buying this simply if you want a Bluetooth speaker - there are cheaper options that sound as good. Of course, those options don't include a built-in display, or 5,000 tracks and an FM player, so it works out to be quite reasonable.

FM works easily as well, and with the simple tuning knob, even people who aren't comfortable with technology, will be able to go from listening to retro music to listening to the latest hits with ease.

One issue is that there's no Aux-in, so if you want to listen to music from your phone on the big speaker, then you have to use Bluetooth. 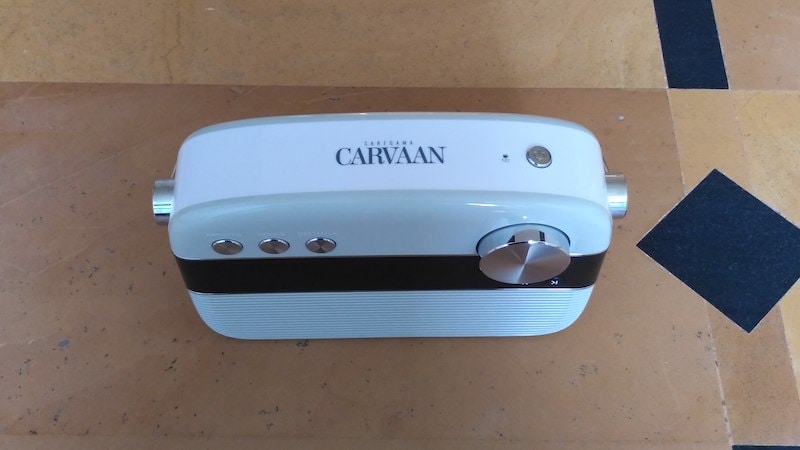 The Carvaan, which charges via a standard Micro-USB charger (included in the box), lasts over 4 hours of playback at full volume, while it lasts for around 6 hours at a more comfortable level.

Verdict
If you're interested in the Carvaan, it's not because of how good a Bluetooth speaker it is, though it's better than we expected it to perform. No, what you're actually looking at is a nostalgia filled gadget that looks beautiful if you grew up in the 80s, or even earlier. The tuning knob is an example of that - there are so many simpler ways of handling navigation that could have been implemented, but the fact is that this is a machine that's designed to evoke the past instead, and it works wonderfully in that regard. The first thought we had on seeing this was that it's so pretty, and it's the sort of thing where you'll be putting in an order for one for your parents, after you've started using it.

One quibble, as we mentioned earlier, is that browsing for content using the Carvaan is a flawed experience. Another issue is the battery life - five hours is pretty good for a Bluetooth speaker, but given the size of the Carvaan, we're a little surprised that the battery capacity is so limited. It's still possible to toss this in the car, take it with you for a picnic in the park, and keep it running the whole time, but you'll want to make sure you charged it up before heading out.

The Carvaan really isn't for power users who want to tweak all aspects of their gadgets; it's a fairly simple device that's best used for listening to Radio Geetmala or tuning that radio knob.

product The Saregama Carvaan is a Bluetooth stereo speaker that's designed to look like an old fashioned radio, and it comes with 5,000 classic songs baked in and radio commentary too.