The Samsung Galaxy Buds are compact and comfortable to use

If you're willing to put a bit of money into your purchase but don't want to go past the four-figure mark, you do have a few big-name options. One of these is the new Samsung Galaxy Buds, a new pair of truly wireless earbuds that is priced at Rs. 9,990 in India. The successor to the Gear IconX which was launched last year, the Samsung Galaxy Buds are more affordable and also take a different approach to the feature set. We're reviewing them today to find out everything there is to know about the Samsung Galaxy Buds. 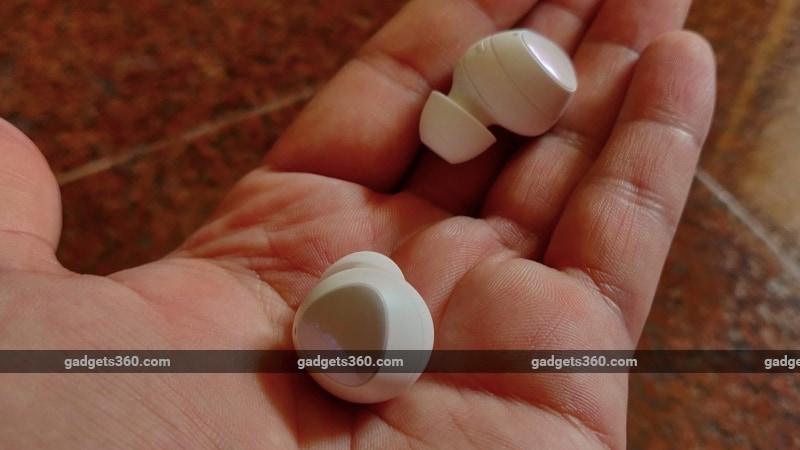 These earbuds have plastic casings with stems extending into the wearer's ears for an in-canal fit and noise-isolating seal. There are microphones on each earbud for use on voice calls and to enable the ambient sound mode. The Samsung Galaxy Buds were comfortable for us to wear throughout the day.

The sales package includes the Samsung Galaxy Buds, charging cradle, a USB Type-C cable to charge the cradle, an instruction manual, and additional rubber eartips and wings. While the wings might help you with a more secure fit, we personally preferred to go without them, since this was more comfortable. The wings might be useful while running, but in our experience, the earbuds were light enough to stay in place without them in most usage conditions.

The inside of each earbud has two charging contact points and a proximity sensor to detect when they've been removed from and put into your ears. Removing them from the ears also pauses the music, which is a good way to quickly stop playback when you need to listen to your surroundings or talk to someone. There is no power switch; we simply had to put the earbuds back into the charging cradle to switch them off. This would of course also then start topping up the batteries in each earbud, which was convenient.

The Galaxy Buds both have their own 58mAh batteries, and the charging cradle has an extra 252mAh for charging the earbuds. Interestingly, you can also charge the cradle wirelessly with compatible devices that support reverse wireless charging or any regular wireless charger. We tested this with the Samsung Galaxy S10+ (Review), and it worked as advertised. 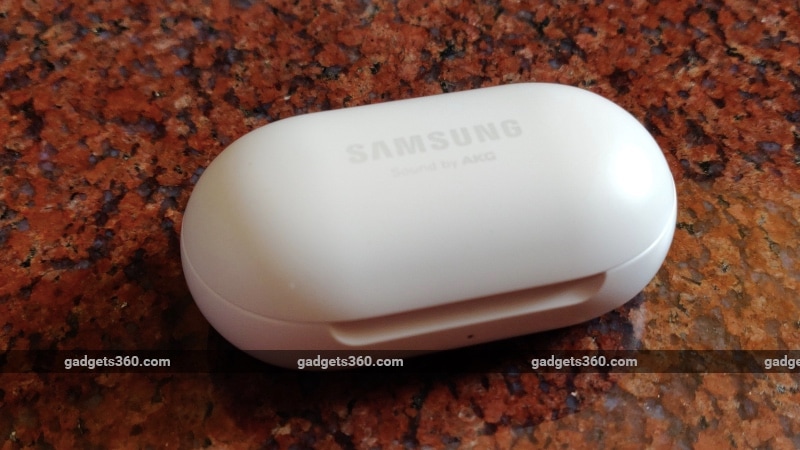 The Samsung Galaxy Buds ran for about five hours on a full charge, and the cradle can charge the earbuds completely twice over. Assuming you start out with a fully charged pair of earbuds and cradle, you can get around 15 hours of usage without having to plug in to a power source. However, this does involve putting your earbuds away for about 30-45 minutes every five hours to get them back up to full charge.

The outer casings of the earbuds are touch-sensitive and can be used to control certain functions while the Galaxy Buds are in use. These include answering calls, playing and pausing music, skipping tracks, adjusting the volume, and triggering Bixby on a compatible device, among other things. The long-press gesture can be customised through the Galaxy Wearable app to adjust the volume, control Bixby, or trigger the ambient sound mode which lowers the volume of the music and activates the microphones to let you hear your surroundings. These controls are quite intuitive and easy to learn, and we quickly found ourselves using them all the time rather than reaching for our smartphone every few minutes.

The Samsung Galaxy Buds support Bluetooth 5 with various profiles including A2DP, AVRCP, and HFP, but lack support for the aptX codec. SBC and AAC are supported, ensuring near-universal connectivity with most smartphones and computers, as well as Samsung's proprietary Scalable codec, which is said to be on par with AptX.

When used with the Samsung Galaxy S10+ (Review), the Galaxy Buds used the Scalable codec by default, and we've tested them with this as well. However, there's no easily available information about which devices use this codec, and if you're using the Galaxy Buds with a device that doesn't support Scalable, you'll be relying on SBC or AAC.

Bluetooth 5 does ensure a stable connection though, and we didn't experience any connectivity issues during our testing of the Galaxy Buds with the Galaxy S10+. 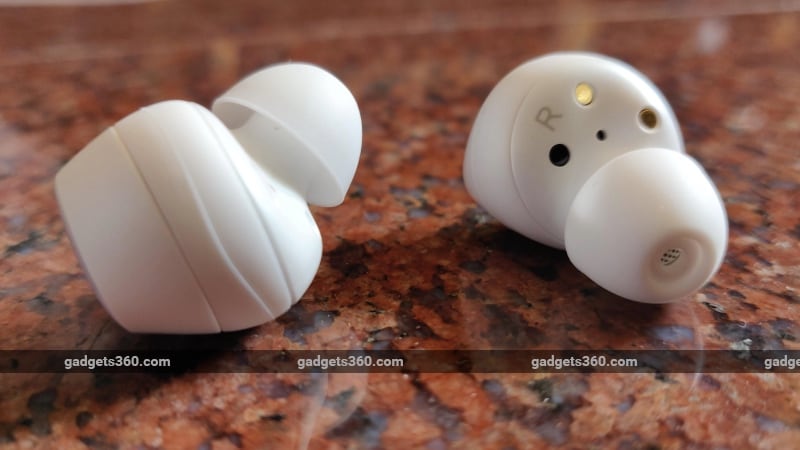 The Samsung Galaxy Buds can be used with the Galaxy Wearable app, which is available on Android. The app shows battery levels for the earbuds, and also has an equaliser option that let you choose between Bass boost, Soft, Dynamic, Clear, and Treble Boost presets. You can also configure notifications from your phone to be read out on the Galaxy Buds, set up the touch-sensitive gestures, make your earbuds beep if you can't find them, and update their firmware.

You can use the Galaxy Buds on iOS devices as standard Bluetooth earphones, but you won't be able to take advantage of the benefits of the app unless you're on Android.

An interesting insight for us from the battery levels was that the battery in the left earbud drained a bit faster than the one in the right one, amounting to a 10-15 percent difference over the course of a single full use. We realised that this was because we were favouring the left earbud for touch controls, as well as removing the left one more often than the right one when we needed to stop to talk to someone. Since the earbuds each have a small 58mAh battery, this difference isn't too surprising or significant in the larger scheme of things.

The app doesn't show battery details for the charging cradle, and you'll have to rely on its LED indicator to know when it's fully charged — it flashes red when the battery is low, glows constantly red when charging, and turns green when fully charged. It takes about 90 minutes to fully charge the cradle with a wall adapter or computer's USB port. The case itself is a simple pill-shaped plastic box that doesn't look too fancy. However, it gets the job done, charging and protecting the earbuds when not in use. 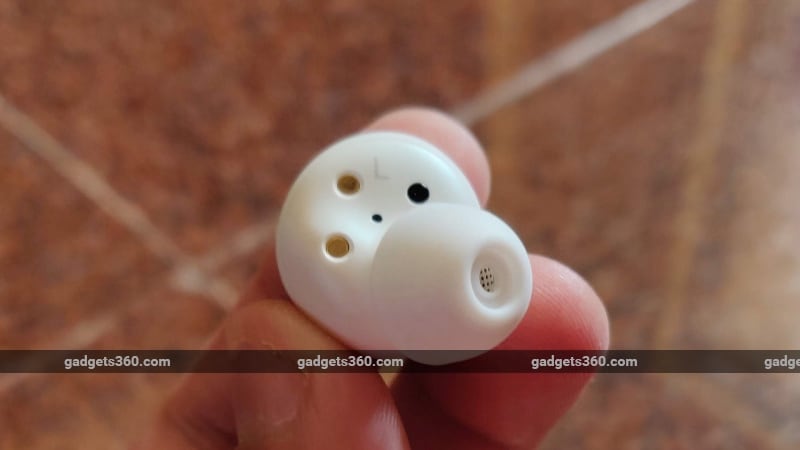 Starting with downloaded tracks, we listened to 9000 Miles by Pendulum in FLAC format. The Galaxy Buds' sonic signature is geared for popular genres, and this drum-and-bass track does bring out the best in them. The track didn't sound quite as good on the OnePlus 6T as on the Samsung Galaxy S10+, because of the difference in codecs.

The Scalable codec resulted in a clear improvement, with the track sounding more open and detailed in our opinion. When using the more widely available SBC codec, we could barely tell the difference in quality between high-resolution audio tracks and compressed or streaming formats.

That said, sound quality was decent even with the streaming services we used, with plenty of excitement and drive coming from the Samsung Galaxy Buds. While the treble occasionally sounded shrill, the sound was decent overall for a truly wireless pair of earphones. The Galaxy Buds can get very loud, but are best used at moderate volumes. The shrillness in the treble and the limitations of the SBC codec are more audible at higher volume levels.

Using both Apple Music and Spotify, we found the sound to be decent across various genres. The Samsung Galaxy Buds have a fairly wide soundstage and decent sonic separation with lows and mids, but we again heard the Buds losing some quality at the upper end of the frequency range.

Listening to Nobody Else by Jarreau Vandal and Brasstracks, we heard punch in the bass and excellent separation of the vocals, but hints of high-end distortion. Reducing the volume to around 50 percent bought the flaws in the highs under control, but also took away from the punchy character of the headphones.

Finally, we also used the Samsung Galaxy Buds for voice calls. Voice quality was good on both ends; we could hear the other person on the call as well as be heard clearly. The microphones are at the bottoms of the Galaxy Buds and are quite far from the user's mouth, but proper tuning ensures that they can pick up voices and relay them suitably. 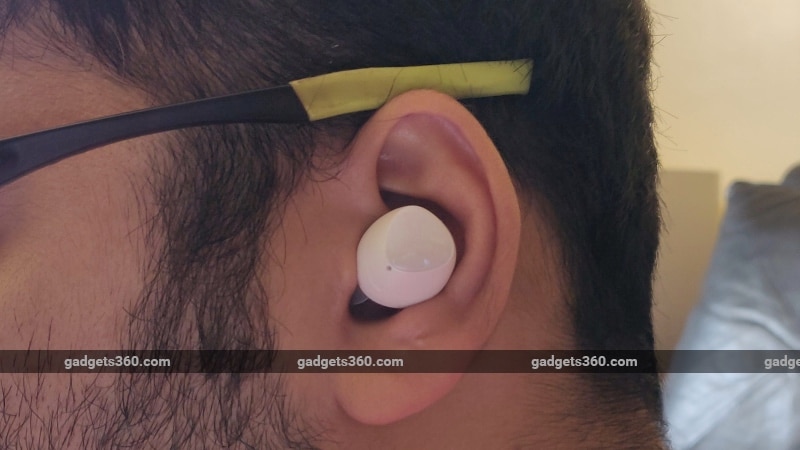 The Samsung Galaxy Buds are an impressive pair of truly wireless earbuds for the price. There is a lot going for this product, including good design, decent audio quality, comfort, and useful touch controls. While better codec support and wireless reverse charging can only be used with compatible devices (such as the Samsung Galaxy S10+), most features work with just about any modern Android smartphone.

The audio quality isn't without its flaws though; the highs can't always keep up with the rest of the frequency range, and no aptX support means that the best audio quality is also dependent on you having a compatible Samsung smartphone as a source.

However, the Galaxy Buds are among the most affordable truly wireless options from a big-name brand, and Samsung has used some expertise from AKG to get the tuning right. If you are planning to pick up any of the new Samsung Galaxy S10-series phones, the Galaxy Buds are worth picking up alongside, especially at the offer price of Rs. 2,999, if applicable.