Are these the best low-cost wireless earphones you can buy today?

Priced at Rs. 1,799, the Realme Buds Wireless continue to take the fight to Xiaomi, which also recently launched the Mi Neckband Bluetooth Headphones in India. Although slightly more expensive, there's a bit more on offer here, including sound tuned by DJ Alan Walker, and a claimed battery life of 12 hours. Does the Realme Buds Wireless live up to the hype? We find out in our review. 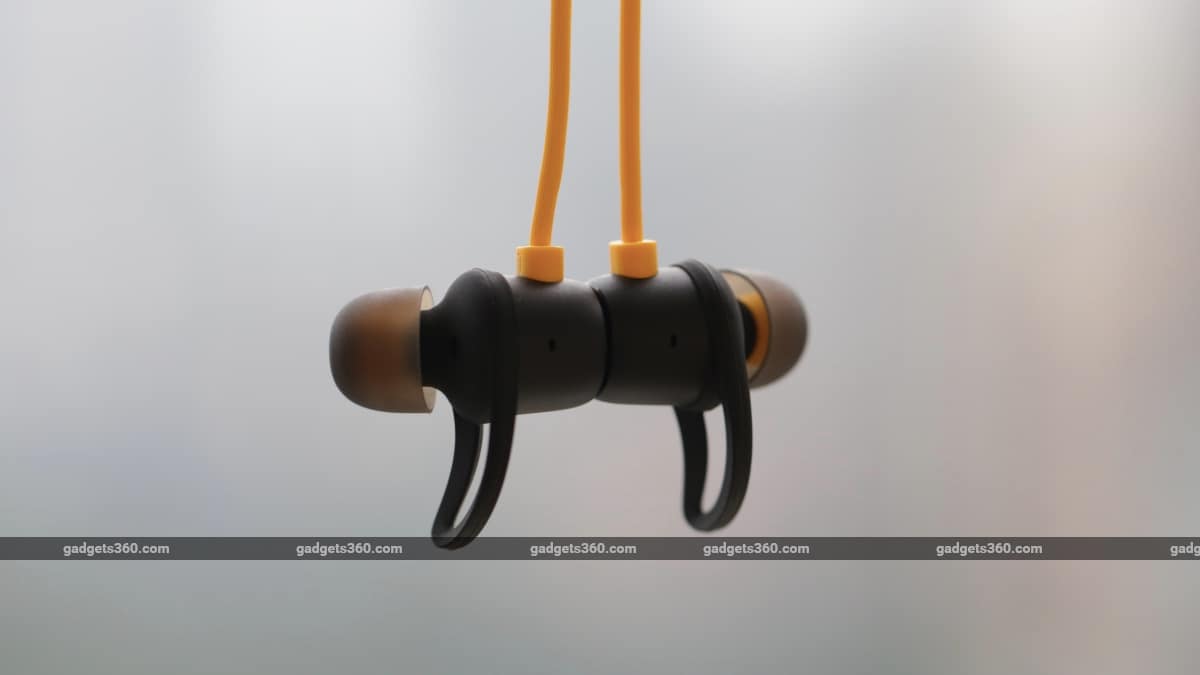 Truly wireless earphones are becoming very popular, and we could very well see Realme get into that space in the coming months. However, for now, the company has taken on wireless headphones in an affordable form — neckband-style earphones. The headset has a flexible neckband with metal modules at the ends, short cables that lead to the earbuds, and the plastic earbuds themselves. We quite liked the yellow-and-black colour scheme of our review unit. The design is simple and the build quality is decent. The device is light at just 30g, and comfortable to wear and use for long hours at a stretch.

Like earlier Realme earphones, the Realme Buds Wireless have magnets in each earbud. While they don't serve any purpose on the wired models beyond keeping the two earbuds together, the magnetic clamp serves as the power switch for the Realme Buds Wireless. Separating the buds turns the headset on, while attaching them powers it down; there is no power button, so this is the only way to control power on the headset.

We found it best to keep the earphones on a table or around our neck when not in use, which was obviously not always convenient. Perhaps a snug storage case would have helped, but the Realme Buds Wireless doesn't come with one.

What you do get in the sales package are three pairs of silicone ear tips, ear wings that are pre-attached to the earbuds, and a Micro-USB cable for charging. The charging port is on the underside of the right module, which also has the controls for playback, calls, and volume.

The Realme Buds Wireless earphones are powered by 11.2mm drivers, with Bluetooth 5 and support for the SBC and AAC codecs. The earphones have a claimed battery life of 12 hours on a single charge, and are said to offer 100 minutes of listening time on a 10-minute charge when the battery is drained. We were able to get around 9 hours of use in our testing, while a full charge of the headset took a little under 3 hours to complete.

Our experiences with wireless earphones priced below Rs. 2,000 have been largely unsatisfactory, and we've been resigned to the fact that good wireless products cost at least Rs. 5,000. The Realme Buds Wireless bring a refreshing change to the budget segment, offering a great combination of design and sound quality for the price. Also, fans of electronic music will be happy to know that the Realme Buds Wireless have been tuned with inputs from popular DJ Alan Walker, and the sound does come across as geared for this genre.

We tested the wireless earphones with a OnePlus 7 Pro (Review) and an iPad mini 2019, using both the SBC and AAC Bluetooth codecs. We listened to streamed music from Spotify and YouTube Music, as well as our collection of high-resolution tracks.

Starting with Take Five by the Dave Brubeck Quartet, we immediately noticed that the soundstage was considerably wider and more detailed than what we're typically used to hearing from products in this price range. Some of the percussion instruments sounded crisp and well defined, although the deeper elements in the middle of the track — the double-bass, in particular — was a bit soft and not quite as distinct as we'd have liked. Still, we found the sound to be detailed and rich on the whole.

We then moved on to Zombies On Your Lawn, the catchy theme song from popular mobile game Plants Vs. Zombies. Like the analogue Realme Buds earphones before, the Realme Buds Wireless is definitely biased towards the low end, and the punchy bass was plain to hear in the heavy synthesised bits of this electronic track. We felt that the bass wasn't quite as tight as what the Realme Buds 2 can produce, but we were still impressed with the attack and drive for a wireless headset.

Next, we listened to a bit of Indian pop with an Unplugged rendition of Amar Arshi's Kala Chasma. Apart from some gentle aggression in the low end, we also quite liked the inoffensive nature of the mids and highs, as demonstrated with the familiar vocals of the track. The sound of the Realme Buds Wireless is tuned for comfort and near-universal appeal, and sticks to that brief. We heard just about as much detail and clarity as we could have hoped for from a pair of wireless earphones that cost less than Rs. 2,000.

We also used the Realme Buds Wireless as a hands-free headset for voice calls, and results were mixed. In some cases we found that voices on the other end of the call were soft, and our callers reported too much background noise — a crow cawing about 20 feet away sounded as if it was coming from right next to us, for the person on the other end. On other occasions, no issues were reported, so call quality seems to be largely dependent on your surroundings and possibly the strength of your cellular signal. 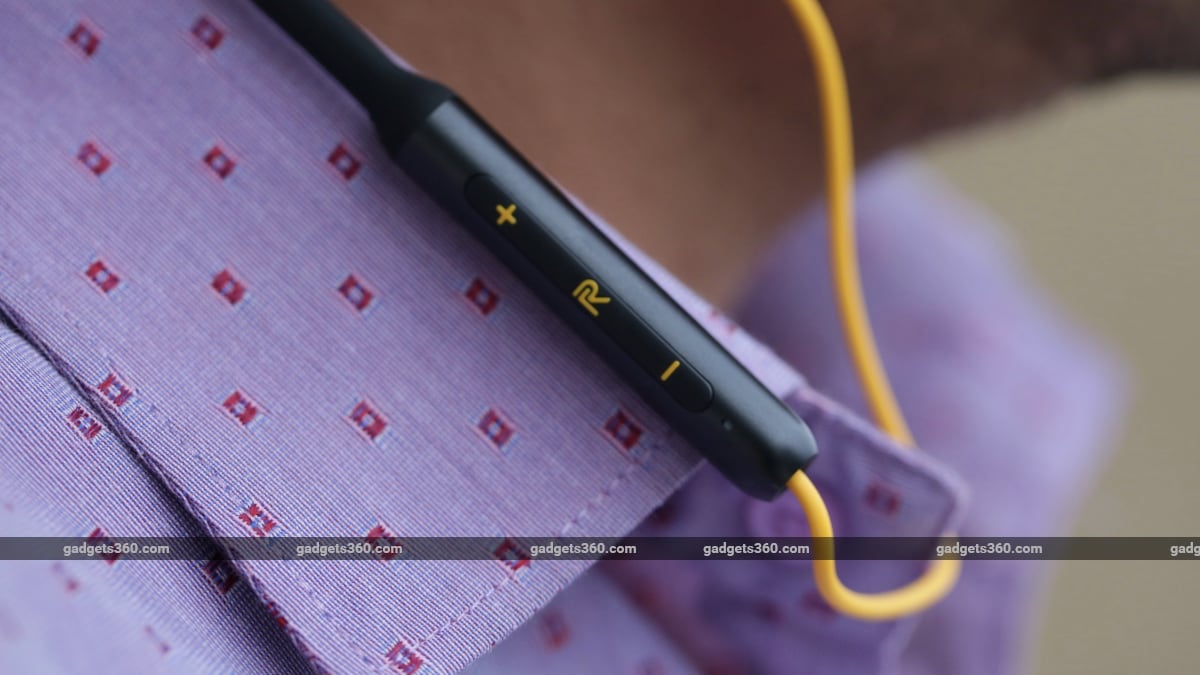 More expensive pairs of earphones such as the OnePlus Bullets Wireless 2 and 1More Stylish Dual Dynamic Driver might offer much more by way of sound quality, but the Realme Buds Wireless does a capable job for just Rs. 1,799. This is a product worth considering simply because it is everything you need for the price.

This headset is built well, has decent battery life, and is very comfortable to wear. The only significant problem for us was the magnetic power switch, which often led to the earphones automatically powering on at awkward times. That aside, the Realme Buds Wireless is a pair of earphones that does exactly what it's supposed to - no more and no less — with unwavering consistency, and we like it for that.