The company’s first true wireless earphones are priced at Rs. 3,999. 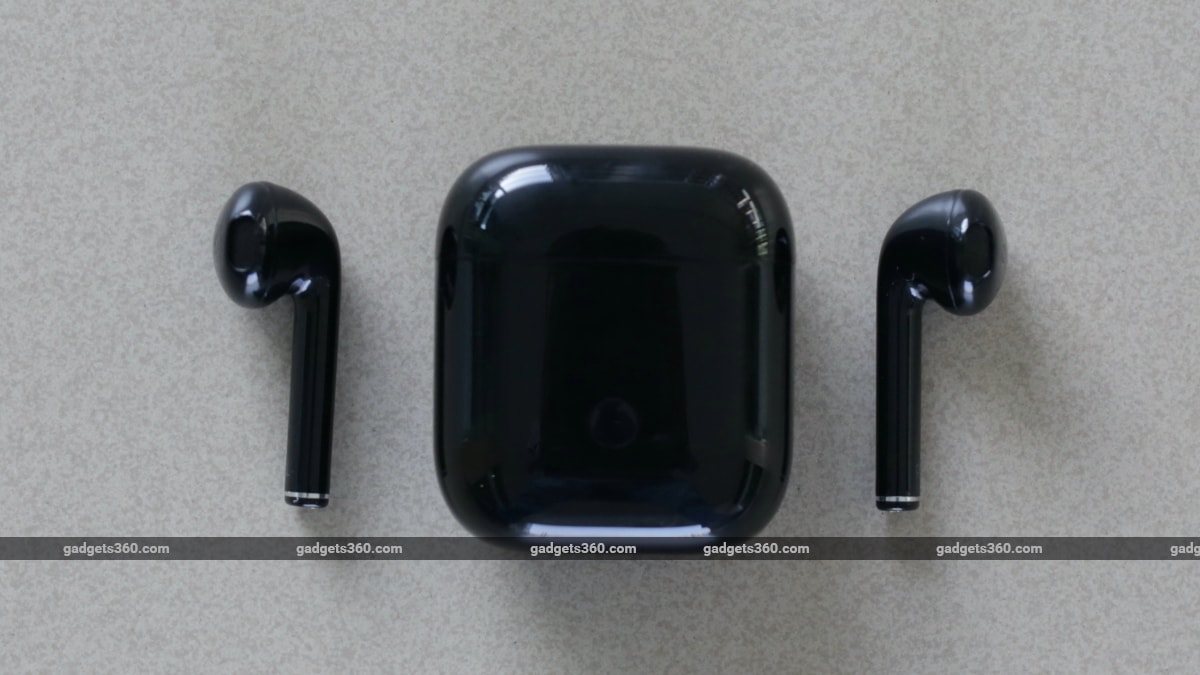 Love it or hate it, the Apple AirPods are iconic like nothing else in the true wireless audio segment. Naturally, the unique design and styling has been imitated by many companies, although most of these have been lesser-known or unknown brands. Today, we're reviewing a pair of true wireless earphones from a top brand that looks more like the AirPods than anything else we've seen.

The Realme Buds Air is the fourth pair of earphones from the Chinese smartphone and accessories maker, and is its first true wireless model. Priced at Rs. 3,999, the Realme Buds Air look and feel a lot like the Apple AirPods and AirPods (2nd Gen), but come at a fraction of the price. Do these affordable AirPods lookalikes sound as good as the actual AirPods, though? Read our review to find out.

When we said that the Realme Buds Air look a lot like the Apple AirPods and AirPods (2nd Gen), we meant it. Everything from the charging case to the earphones themselves is heavily inspired by the popular true wireless earphones from Apple, and the variant in white would be hard to distinguish from the Apple product. You get the same outer-ear fit, capsule-like case, and general aesthetic.

The stalks of the earbuds are flat and not rounded, as they are on the AirPods, and the Realme Buds Air is available in three different colours - white, black, and yellow - so there are some ways to tell the two quite differently priced products apart even at first glance. We had the black version for review, but we feel that the white option would be best if you want people to think you have a pair of AirPods.

There are fewer sensors on the Realme Buds Air; just a single one on the inside of each earpiece detects when either or both have been removed in order to pause music playback automatically. The charging case is a little bit shorter and wider than that of the AirPods, and has a pairing button at the front. The bottom of the charging case has a USB Type-C port for charging. The earphones don't have power switches, and they automatically turn off and start charging when placed in the charging case.

Realme has gone with the same minimalist look as the AirPods, and there are no logos on the earbuds at all. The charging case has ‘Designed by Realme' in small text at the back, which is the only branding you'll see on the product itself. Pairing the headset is similar to how it's done on the AirPods; the button needs to be pressed while the earbuds are in the case, and once paired, they automatically connect to the source device when the case is opened.

We found the earphones to be very comfortable, but as with the AirPods, passive noise isolation was poor and too much outside sound could be heard even with the volume set high. The fit, while not as secure as with proper in-ear headphones, is decent for regular use cases.

The charging case has an LED indicator on the front which shows its approximate charge level; green indicates anything from 67 percent to full, yellow means 33 percent to 67 percent, and red means it's below 33 percent. Apart from USB Type-C charging, the case also supports wireless charging through the Qi standard. You will need to buy a compatible wireless charger for this or use something you already have. Realme has announced that it will be launching a 10W wireless charging pad soon, which will be compatible with the Buds Air.

The earphones themselves have no buttons but do support touch gestures. These were a bit complicated and difficult to remember, and didn't always seem to work; triple-tapping the left earbud to skip to the next track often didn't elicit any response, though doing the same on the right one worked better. We often had to try twice or thrice to get the desired response from the earphones, which quickly got annoying. The wear detection - which pauses music when either earphone is removed and resumes playback when it is put back on - worked well for the most part. Volume can't be adjusted using the earphones, and needs to be controlled from the source device, which was a bit disappointing for us.

When it comes to specifications, the Realme Buds Air is impressive. The earphones each have a 12mm dynamic driver, and there's Bluetooth 5 for connectivity, with support for the SBC and AAC Bluetooth codecs. Realme uses what it calls its R1 chip, which is said to improve connection speed and stability. There is also a gaming mode (activated by a long-press on both earphones at the same time) which is said to reduce connection latency at the cost of sound quality. Voice assistants on your phone are also supported, and we found this to work on Android with both Google Assistant and Alexa, as well as on iOS with Siri.

Battery life on the Realme Buds Air wasn't as good as we had hoped. The earbuds ran for about three hours on a full charge, and the case was able to give them another four full charges for a total of 15 hours of use per charge cycle. Similarly priced options in the segment offer more battery life in the case, but their cases are bulker.

The Realme Buds Air mimics the popular Apple AirPods in a lot of ways, but does it come close to competing in terms of sound quality? The simple answer is no. While there's a lot of things about this pair of true wireless earphones that suggests it should cost much more than its Rs. 3,999 asking price, sound quality isn't one of them. We found the sound to be on par, and in some cases slightly below average, compared to others that sell for around the same price.

We used the Realme Buds Air with an Android smartphone for much of this review, although we also tested it with iOS devices and a MacBook Air. Sound quality was consistent across source devices and equivalent music sources. Naturally, the best performance was to be had with high-resolution audio tracks, but we didn't hear a huge dip in quality when using streaming services such as Spotify and YouTube Music.

The earphones are quick to pair, hold a stable connection, and can get very loud. The sound, on the other hand, was a bit dull and plain for us. While not bad, the earphones didn't sound particularly good either; there simply wasn't much detail to be heard, with the soundstage coming across as two-dimensional and narrow. While specific elements could be heard with some sense of direction, there simply wasn't enough depth in the sound to make the Realme Buds Air stand out.

The earbuds feature an outer-ear fit

The weak noise isolation interfered heavily with sound quality, since there was always a hint of background sound to be heard over the music being played. Turning the volume up while listening to the bass-heavy I Can't Stop by Flux Pavilion did drown out some of the noise, but this was a bit too loud and fatiguing for us over time. High volume levels also tended to bring out some of the drive in the low-end, which will appeal to fans of bass but not too many others.

That said, the Realme Buds Air have a sonic signature that is tuned for most popular music today, elevating the low and high frequencies with a moderate dip in the mid-range. Switching to the lively Hold Back Love by Kraak and Smaak, we did enjoy the sound, but the lack of anything special beyond the punchy bass hits made for an entirely ordinary listening experience. Again, there was nothing to complain about in the sound, but nothing worth significant praise either.

Listening to a high-resolution version of Reckless With Your Love by Azari did somewhat improve the listening experience with a bit more detail than we experienced when listening to tracks on Spotify and YouTube Music. However, this still didn't make the Realme Buds Air as immersive and engaging as comparably priced products such as the Leaf Pods. Essentially, while there is some bass and the sound is inoffensive, there's simply not enough by way of detail or character.

As a hands-free headset, the Realme Buds Air does a decent job, and we had no trouble on voice calls when using it. There are two microphones on each earbud to capture the wearer's voice, and we were able to hear and be heard clearly on most calls. We were able to use just one of the earpieces at a time with the other placed inside its case, which is a useful feature to have on voice calls. We also tested the low-latency mode with PUBG Mobile Lite, and while this did reduce the delay in sound a bit, it still wasn't as good as with wired earphones.

The Realme Buds Air were designed with a very specific aesthetic and feature set in mind, and there's no denying that this pair of earphones is heavily inspired by the Apple AirPods. This is visible not just in the design, but also in many features such as wireless charging, the use of a special wireless chip for connectivity and stability, and the touch controls. However, when it comes to sound, the Realme Buds Air disappointed us.

The sound is best characterised as dull and plain, with very little by way of detail. There really isn't much to the sound beyond getting the basics right; what you're getting is an entirely ordinary listening experience that isn't the best you can get even at this low price of Rs. 3,999. With the Realme Buds Air, it's all about the design and features rather than sound quality.

Amazon Holiday Shopping: The Man Who Makes It Happen
Facebook Says It Can Locate Users Even if They Opt Out of Tracking