At Rs. 14,999, the Playgo BH70 is among the most affordable pairs of active noise cancelling headphones you can buy. 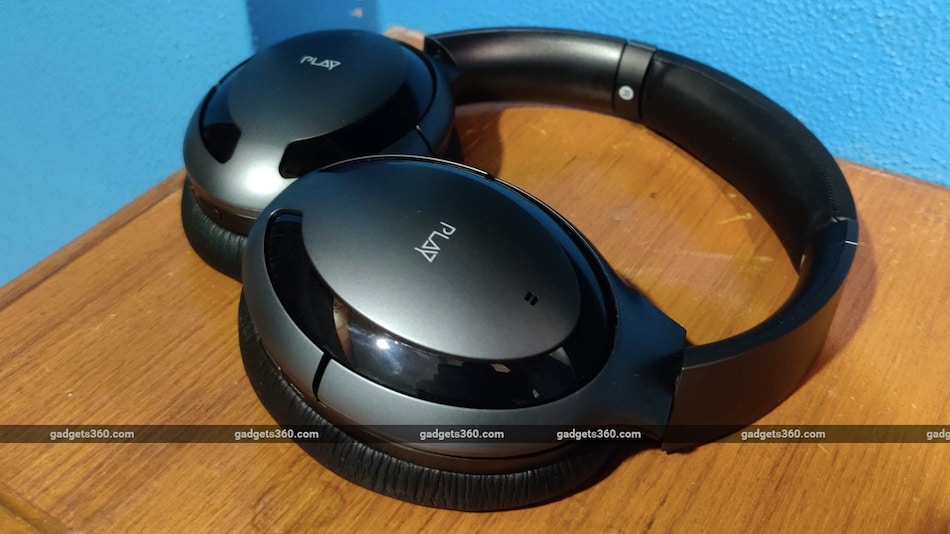 The space is thus wide open for competition, and affordable audio and accessories brand Play has stepped in to try and fill this gap. The latest headset from the company is the Playgo BH70, which is priced at Rs. 14,999. This new pair of headphones offers active noise cancellation, Bluetooth 5 with superior codec support, and more. We review the new headphones to find out if they are good enough to take on the current favourites from Bose and Sony.

The headphones are comfortable to wear, thanks to soft padding and the over-ear design

Most headphones in the premium category look and feel great, but the Playgo BH70 is a bit of an outlier here. We don't want to say that it looks bad, but we certainly don't feel that it looks very good either. It's made entirely of plastic, with a combination of glossy and dull finishes. It comes across as toy-like, and has an aesthetic that is more suited to budget headphones. The Playgo BH70 is available in two colours, grey and brown.

There are five buttons - two on the left and three on the right - which are creaky and feel oddly sticky to press. The buttons usually worked, but didn't offer enough physical feedback and didn't respond immediately, leading to errors. The ones on the left are for power and active noise cancellation, while the playback and volume controls are on the right. Pressing down on the left ear cup with your palm activates the transparency mode temporarily (until your palm is lifted), while double-pressing the play/pause button invokes the voice assistant on a paired smartphone.

Although we had issues with its looks and buttons, the Playgo BH70 headset is very comfortable to wear and use. The over-ear fit was snug, with comfortable padding and a good noise-isolating seal. They weren't too heavy for us, and using the headphones with glasses wasn't a problem. The sales package includes a big hard carry case along with a USB Type-C cable to charge the headphones.

The Playgo BH70 headphones are IPX4 rated for water resistance, and use Bluetooth 5 for connectivity. The use of a Qualcomm QCC Bluetooth chip means that the headphones support the aptX low-latency codec. The headset uses 40mm dynamic drivers and has a frequency response range of 20-20,000Hz.

Like other large over-ear headphones, the Playgo BH70 has decent battery life. We were able to use the headphones for around 20 hours on a single charge, with active noise cancellation on much of the time and the volume level at roughly 70 percent. There's no fast charging on this headset, and it will take around four hours to fully charge a completely drained battery.

The Play BH70 headset has a companion app that helps control certain features. The app - available for Android and iOS - lets you keep the firmware up to date, adjust the noise cancellation level to allow some transparency, adjust the equaliser, and more.

The app is relatively simple but it did allow us to set up and toggle some features according to how we like them, including the auto pause and play gesture, and flight mode (which keeps noise cancellation active while preventing the headphones from powering down due to inactivity).

Although everything leading up to this part of the review suggests that the Playgo BH70 isn't very impressive, it makes up for much of its shortcomings with sound quality. We enjoyed listening to music on the headphones, and support for the Qualcomm aptX codec helped get the best out of all kinds of music.

We used our OnePlus 7T Pro (Review) and Apple MacBook Air to test the headphones; the Android smartphone used aptX, while the laptop used the AAC Bluetooth codec favoured by Apple. Audio tracks were played on both devices using Spotify, YouTube Music, and our collection of high-resolution files.

Sound was better on the Android smartphone for a couple of reasons; the aptX codec definitely made a difference in terms of responsiveness and detail, but we also found the sound to be a bit too soft on the MacBook Air. Listening to Supalonely by Benee, we could distinctly tell the difference the better codec made to the listening experience.

The starting beat of this catchy track had a distinct sense of detail and direction, with the interplay between the left and right channels adding to the quality of the sound considerably. The headphones provided a wide, spacious soundstage that went far beyond basic stereo separation, making for an immersive and detailed listening experience.

Switching to Indian electro-pop, we listened to Din Raat by Lifafa. The Playgo BH70 made for an excellent listening session with this retro-Bollywood-inspired track, capturing the essence of the modern electronic elements as well as the 1970s-style vocals. The bass was deep and calculated, while the mid-range and highs were crisp and clear. The sonic signature is one that favours most popular genres, with a clear focus on the lows and highs, but the mid-range was never overpowered.

Active noise cancellation on the Playgo BH70 isn't ineffective, but neither is it anywhere near the level of quality we've experienced on top-end options. There is a definite reduction in droning and other sounds; the headphones managed to cut out a significant part of the noise made by a particularly loud window air conditioner. That said, the Playgo BH70 is a long way from delivering stark silence you get on the Bose Noise Cancelling Headphones 700.

Active noise cancellation on the Playgo BH70 is effective, but nowhere near class-leading

The idea of affordable noise cancelling headphones isn't new; options such as the Sennheiser HD450BT and Sony WH-CH700N offer decent enough performance for under Rs. 15,000. The Playgo BH70 takes a different approach to the segment, trying to be more like a premium active noise cancelling headset at an entry-level price.

Although design and the quality of noise cancellation aren't exactly premium-grade, the Playgo BH70 makes up for that with sound quality. The headphones sound good across the frequency range with most popular genres, and make for a detailed and enjoyable listening experience. Battery life is good as well.

That said, we feel that the price is a bit too high given our overall experience with the Playgo BH70. While there isn't much to complain about, competing options such as the Sony WH-XB900N might offer a better overall experience, particularly if you like your bass aggressive.