There's no shortage of cheap and affordable earphones in the market, many of which offer acceptable audio quality for everyday listening. The Tekfusion Twinwoofers are one such example, which we reviewed a couple of months ago. Today, we have another such entrant from a brand that's more widely known. The OnePlus Bullets V2 is the company's most recent budget audio offering, and is the successor to the Silver Bullet earphones that were launched way back in 2014.

Priced at Rs. 1,199, the Bullets V2 promise premium build quality and rich audio without having to spend a whole lot. The company is known to make quality smartphones, most recently the OnePlus 3T, which shows that quality need not come at a hefty premium. Has OnePlus managed to work that same magic with its audio products too? Let's find out.

The Bullets V2 are designed for everyday listening, and considering the price, they are extremely well built. Each earbud has a metal casing for the driver inside, which makes them durable. OnePlus has paid special attention to the texture of the casings too, which is why they feel premium when you hold them. The earbuds are inconspicuous when you wear them, and weighing just 2 grams each, you'll barely feel them in your ears even over long durations.

In the box, you get extra pairs of silicone eartips in different sizes and that's about all. We would have liked a carry pouch thrown in as well. The Bullet V2s employ a flat cable which is not supposed to tangle easily, but in our experience, it tended to tangle no matter how carefully we rolled it up. There's an inline remote control with a microphone and three buttons. You can jump forward and backwards in your playlist by holding down the volume buttons, and long-pressing the centre button lets you summon the voice assistant on your smartphone. 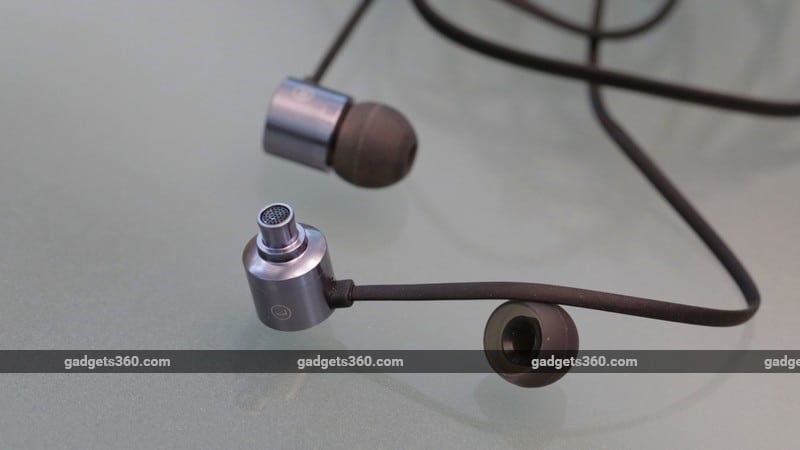 The OnePlus Bullets V2 feature pretty standard specifications, as often found in this price segment. Each earbud features a 9mm dynamic driver with a frequency range of 20Hz - 20,000Hz and an impedance rating of 24Ohms. OnePlus say the Bullets V2 are fitted with aryphan polyarylate diaphragms, which should help reduce weight while providing a high vibration frequency. The earphones come in two colours - black and white - and the cable is 1.25m long.

We tested the OnePlus Bullet V2s on a Google Pixel XL as well as an Asus Xonar U7 external DAC. Audio files included a mix of MP3 tracks from Apple Music as well as FLAC files. The audio tracks we focused on for this test were Shone by Flo Rida, Medicine Man by Zero 7, and Conduct by the Cranberries.

Our pair of Bullets V2s had to be broken in a bit before they started sounding better. The first thing you'll notice is how open they sound. The vocals in Conduct were clear and distinct, with good separation from other frequencies. The treble sounded bright without getting too piercing at higher volumes. Mid-range frequencies were also handled very well, which was very evident in Zero 7's track. Once again, individual instruments were easily identifiable, which makes such tracks a joy to listen to. 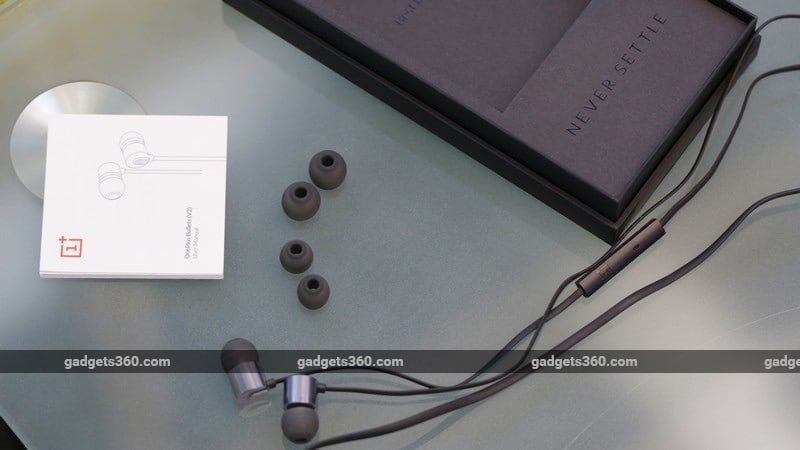 The Bullets V2 have good range when it comes to the lower frequencies, although this could have been better. Provided you get a good seal (which is easily achieved) with the eartips, the bass is fairly tight with a decent kick. In our experience, the bass didn't get too boomy even at high volume levels but what we really missed was bass extension. This was very noticeable in Shone, where the bass tended to roll off quicker than it should have.

The included eartips provide a comfortable seal and we didn't experience much fatigue even after a few hours of continuous listening. They also did a pretty decent job at blocking out ambient noise. The inline microphone allowed good audio quality on calls, and the buttons are designed well, so it was easy for us to find the control we were looking for without fumbling.

Verdict
Overall, the OnePlus Bullets V2 do a splendid job of handling music across genres. We could have used a bit more kick in the bass, but sound is subjective and if you aren't into bass-heavy tracks, you'll find the Bullets V2 more than satisfactory. At 1,199 rupees, it's hard to complain as they offer good value for money. If you own a OnePlus 3 or OnePlus 3T, then these will also complement your phone aesthetically.

product The OnePlus Bullets V2 are a very affordable pair of in-ear headphones which offer good performance across the frequency range. 4 out of 5 stars