It's easy to find a Bluetooth speaker that fits pretty much any budget these days, but finding a good one at a low cost that's also waterproof is still a bit tricky. Indian accessory and wearables maker Noise might have just the solution for all those who are looking for such a thing.

The Noise Aqua Mini is a compact Bluetooth speaker that's IPX7 rated, which means you can dunk it in a little bit of water without worrying about killing it. It's also very well priced at just Rs. 1,999, making it good budget contender. It's time to see if it sounds good too.

The Aqua Mini is the company's debut waterproof speaker, and for a first attempt, it's not too bad. The speaker is designed to be rugged, which is why it has an industrial look with exposed bolts. It's not the prettiest, but it gets the job done. The exterior is built out of hard plastic and rubber, with metal mesh inserts at the front and back.

The Aqua Mini has a row of buttons on the top for power and music playback control. Despite the stiff rubber coating, the buttons themselves don't need much effort to press. On the side, we have a thick flap that conceals a Micro-USB port, reset pin-hole, and auxiliary-in port. The right corner of the speaker has a soft rubber handle, to which you can attached a carabiner that comes in the box. With this, you can clip the speaker onto things when you're travelling.

The speaker doesn't feel too heavy at 220g and it's quite sturdy too. It easily survived a couple of drops. The finish of the plastics could have been a little better, and we would have liked at least a few colour options, instead of just black. In the box, you get a 3.5mm stereo cable, a Micro-USB charging cable, and a manual.

The Aqua Mini uses Bluetooth 4.2 with the Low Energy profile, which should help in prolonging battery life. There's a 50mm full-range driver with an impedance of 9 Ohms and a rated power output of 5W, but there's no mention of the frequency range. There doesn't seem to be any passive radiator either, to help with the low-end frequencies. The speaker doesn't have a microSD card slot or USB port so you can't use it as a standalone music player, but there is a built-in FM receiver.

When we first took it out of the box, the speaker sounded quite flat, but it sounded better after burning it in for a few hours. Due to the relatively large driver, the Aqua Mini gets very loud when you're listening to it indoors. Outdoors, you'll still need to max out the volume. We didn't hear our music distorting at high volumes, which is good.

The bass is not punchy, as expected, but the driver moves a good amount of air within the chamber so that low-end frequencies aren't completely flat. Genres like EDM, heavy metal and hip-hop don't fare too well as the speaker simply cannot push out good bass. Other genres like jazz, pop and even country are easier for the Aqua Mini to handle. 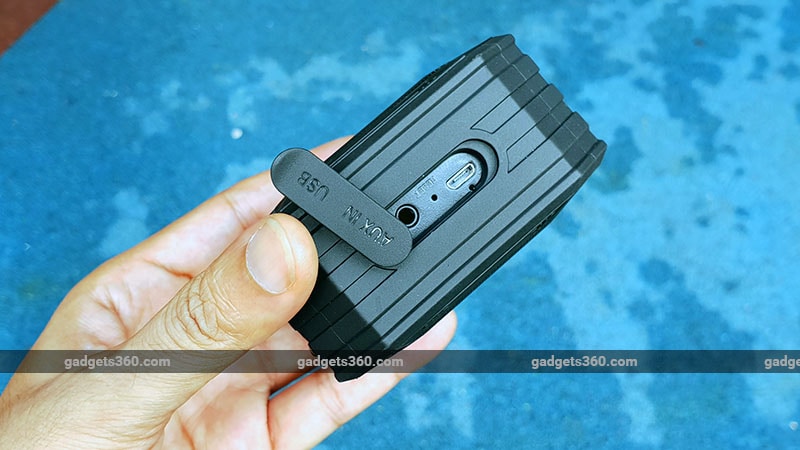 Instrument separation isn't the best in the mid-range, and the sonic signature isn't as warm as we'd like, but it doesn't sound tinny either. Vocals are handled quite well and are put front and center, which is noticeable in tracks such as Dreams by Fleetwood Mac. Higher frequency notes sound good too. The vibration of the driver causes the body of the speaker to vibrate too, but the rubber feet help it stay planted on most surfaces.

The controls work well, but we wished that the volume could have been controlled with a single press of the respective buttons, instead of long presses. A single LED light hidden within the front mesh changes from blue to green when you switch to FM mode. There's also an audio cue, which is the same as the notification alert tone on iPhones.

FM radio works well only if you plug in a 3.5mm stereo cable, which acts as an antenna. The internal microphone worked well for handling phone calls. Noise doesn't specify for how long the Aqua Mini can survive underwater but going by the definition of the IPX7 rating, it should be able to withstand depths of up to one metre. We dunked it a few times in water and even used it in the rain and it continued to work just fine. 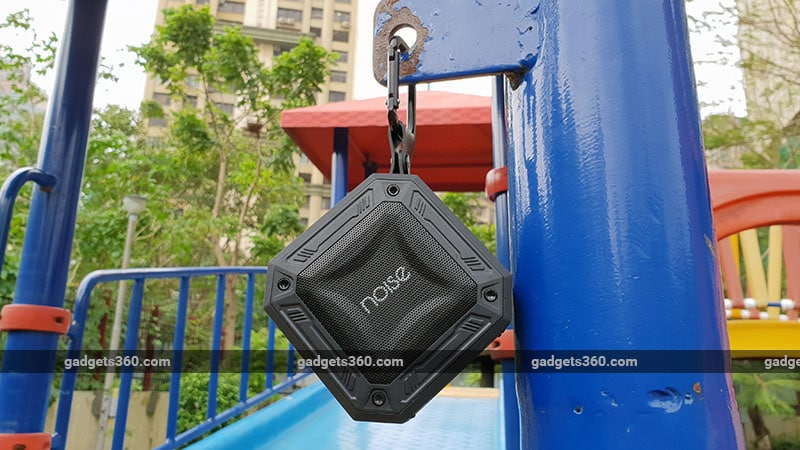 The internal battery is rated to last for up to 10 hours, which seems slightly conservative, as we managed to get close to 11 hours of music playback, with the volume set to 70 percent most of the time and a mix of Bluetooth streaming and FM radio playback. Charging is slow and even with a high-wattage charger, it takes close to three hours to fully charge this speaker. Sadly, there's no way to check the battery level. If it's very low, you hear a little sound and the LED starts flashing red.

Verdict
The Aqua Mini is a good first attempt from Noise, and at its current retail price of Rs. 1,999, it's one of the few decent sounding IPX7-rated speakers in the market in this segment. It has powerful sound for its size, built-in FM radio, and good battery life, and is rugged to boot.

Further reading: Noise, Bluetooth Speaker
Roydon Cerejo Email Roydon Roydon Cerejo writes about smartphones and laptops for Gadgets 360, out of Mumbai. He is the Deputy Editor (Reviews) at Gadgets 360. He has frequently written about the smartphone and PC industry and also has an interest in photography. With over a decade of experience covering the consumer technology space, he is also an avid sci-fi movie and TV show geek and is always up for good horror flick. Roydon is available at roydon@gadgets360.com, so please send in your leads and tips. More
Lunar Eclipse 2018 Today: Time in India, Where to Watch the Total Lunar Eclipse
BitTorrent Acquired by Blockchain Startup Tron

product The Noise Aqua Mini boasts of powerful sound and IPX7 water resistant rating. All this at a relatively affordable price. Read our review for more. 3.5 out of 5 stars