With the 3.5mm headphones socket disappearing from smartphones, we have seen Bluetooth headsets gain popularity, and the low end of the market is flooded with unbranded Chinese products, apart from a few units from the likes Altec Lansing and Skullcandy that are priced under Rs 3,000. Now, accessories brand Mivi, which has been mostly selling cables on Amazon, has entered the market with its own Bluetooth headset. It's the in-ear type and retails for Rs 2,999. Let's find out if this Bluetooth headset is worth your money. 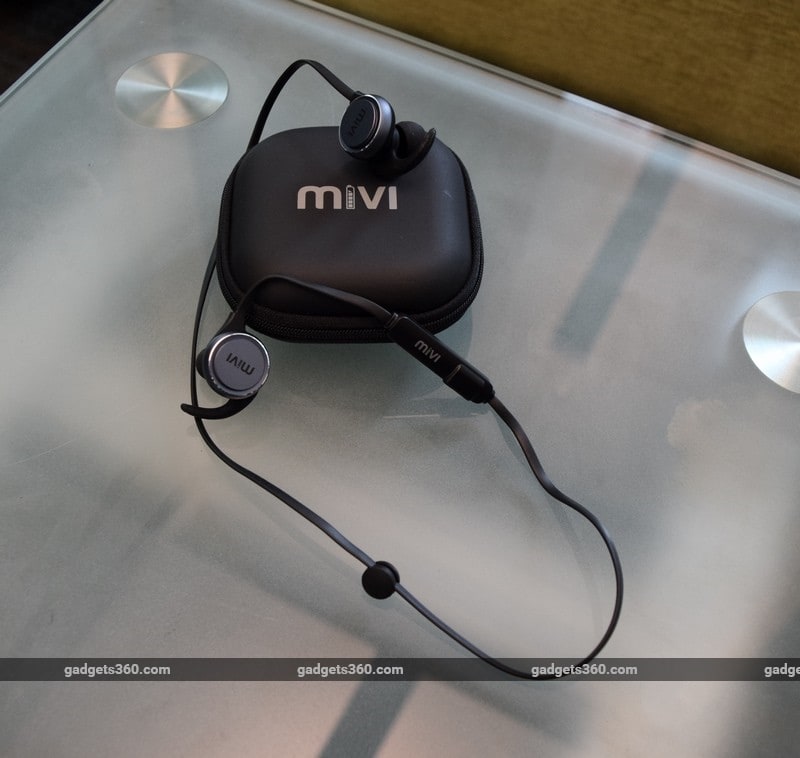 The Mivi Thunderbeats is an in-ear canalphone-style pair of Bluetooth headphones with a frequency response range of 20Hz - 20,000Hz. Both earpieces have 13.5mm audio drivers with an impedance of 16 Ohms. The controller is a Qualcomm CSR8645 chip, which supports Bluetooth 4.1 and the aptX Bluetooth codec, with a range of 8-10m. Though the majority of phones still use the standard SBC codec, newer devices such as the OnePlus 5 (Review) support aptX and aptX HD for higher quality audio.

The design is such that the ear hooks and tips are not joined, so you can opt for larger tips while using smaller hooks if that's more comfortable for you. The competing Altec-Lansing MZW-100 has fused ear hooks and tips, which might not be convenient for everybody.

The packaging for the Mivi Thunderbeats is quite large, partly because it includes a case to store the headset in. Both metal and plastic have been used in its construction. The chambers that house the drivers are made of plastic, while larger metal caps house the battery and circuitry. These metal caps also have magnets so you can snap them together to keep the headset from dangling or falling off your neck when the earpieces aren't in your ears. 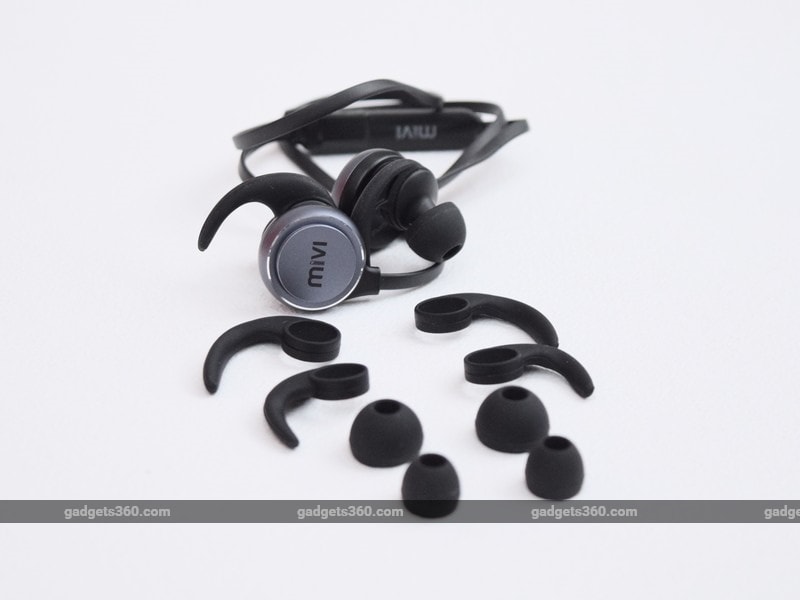 The inline control unit has three buttons, a microphone, an LED light, and a Micro-USB port to charge the device through. The port has a rubber flap which makes it resistant to sweat and water, to some extent. There are a few features which are quite useful, such as the double connection mode that allows the headphones to be paired to two devices at a time. You can press the volume up and down buttons simultaneously to switch between paired devices. Mivi calls the center button a multifunction button and it is quite handy. Apart from pressing it to answer and disconnect a call as usual, you can double-press it to switch audio between the phone and headset. You also have the option to mute an ongoing calling by pressing the volume up and down buttons simultaneously.

The Mivi Thunderbeats fit well in the ears, and the hooks ensure that they do fall out easily. If you are looking for a Bluetooth headset to use while running this would be a good choice. The ear tips fit well and block out noise to some extent, so you won't need to crank the volume too high. Also, the volume can get really loud and we had to keep it at 80 percent or lower most of the time.

For testing the Mivi Thunderbeats we used a Google Nexus 6P (Review) and a OnePlus 5, which supports the aptX codec. For tests we streamed music from Google Play Music and played the same songs in FLAC format as well. We found a noticeable difference between streamed audio and the FLAC format when using the aptX codec. We found the soundstage to be wider with FLAC files and we could distinguish between different instruments better. Focus tracks for this test were Highway to Hell by AC/DC, Starboy by The Weeknd, and First Time by Kygo & Ellie Goulding. While testing, the OnePlus 5 flashed an aptX logo when the headphones were paired. Sound does leak at higher volumes but we found 70-80 percent to be the sweet spot. In AC/DC's Highway to Hell, the mids and the highs were bright, but started to sound shrill if we went any louder. Starboy sounded good, and the headphones did manage to deliver tight bass, but also tended to drown the mids out. While the bass is good, it is overpowering and isn't very pleasant to hear at higher volumes. We observed the same behaviour when listening to First Time - the headphones would deliver bass and highs well but lacked the punch for mids. In most other songs we found that the Thunderbeats would deliver lows and highs aggressively but the mids were lacking.

The headphones ran for a little over 7 hours in our battery life test, which is on par with what Mivi claims. Charging does not take much time, and can be done using any smartphone charger. The Thunderbeats also boasts of Qualcomm's cVc Noise Cancellation Technology which helps clear up audio during phone calls. We had no complaints from people we called, and we could hear the other parties clearly as well.

Verdict
The Mivi Thunderbeats is a decent entry-level Bluetooth headset. For Rs 2,999 it offers decent quality sound output, along with support for aptX which is rare at this price point. The design allows you to mix and match ear hooks and ear tips, and the magnets help a lot when in use and for storage. You can wear this headset for long durations and it can also be used while working out. While we would have preferred a more neutral sound signature, a lot of people do like exaggerated bass. If this works for you, the Mivi Thunderbeats offers good value for money.