Modern TVs are constantly improving when it comes to picture quality, and even affordable options these days offer sharp 4K screens, smart connectivity, and additional features such as HDR and multiple ports for various source devices. However, sound quality on TVs hasn't improved as quickly as picture quality, and the result is that the audio experience with many new TVs is disappointing.

The solution to weak sound is, of course, an external audio system of some kind. This could be a simple pair of speakers, a multi-channel speaker package, headphones, or a soundbar. While a decent multi-channel speaker package is often the best option for sound quality, it involves complicated installation and high cost. In such cases, a soundbar might be a better option.

Soundbars come for a wide range of prices, with many of the popular options costing more than Rs. 10,000. The Xiaomi Mi Soundbar stands out in the budget segment, largely because of its Rs. 4,999 price tag. There's a lot on offer, with the soundbar promising a big boost to your TV's audio. We review the Xiaomi Mi Soundbar to find out if improved audio is indeed just a few thousand rupees away.

Despite its low price, the Mi Soundbar checks most of the boxes for a proper soundbar. It has eight drivers spread across the 83cm length of the unit. The Mi Soundbar has two tweeters, two wide-range drivers, and four passive radiators handling different parts of the sonic frequency range. It has a fabric cover over the front that hides the drivers. There are no sharp edges, and rounded corners all around the speaker. The controls can be found at the top, while the back has the inputs and power switch.

The Mi Soundbar supports Bluetooth 4.2, and its physical inputs include optical as well as coaxial S/PDIF, stereo RCA line in connectors, and a 3.5mm socket. It has a frequency response range of 50-25,000Hz.

You can wall-mount the soundbar, and the right screws and plugs for this are included in the box. There is no additional subwoofer unit, as the passive radiators provide the bass output. The Mi Soundbar looks good and feels solid enough, although it would have been nice to have had a few colour options. Furthermore, the soundbar is relatively tall, and when placed on a table in front of a TV, it might block its IR receiver or a part of the screen. You'll have to put a bit of effort into positioning it to avoid this. The biggest flaw of the Mi Soundbar is its lack of a remote. This means that you need to physically get up to adjust its controls, including power, volume and source selection. All of these are things you might want to change while you are watching something from the comfort of your couch. While the low price does offer some explanation for why there isn't a remote, that doesn't take away from the need for one on a device like this. There are ways to work around this — we'll get into that later — but it's still an inconvenience that can't be overlooked. We wouldn't have minded at least the option to pay a few hundred rupees extra for a remote.

Operating the Xiaomi Mi Soundbar is simple enough — the power switch at the back turns it on with the last-used source selected. If you're using the soundbar primarily with a single source such as your TV and can use your TV's remote to control the volume, the only thing you need to get up to do is turn it on and off.

Oddly, the only cable included in the sales package is an optical S/PDIF cable, which allowed our TV to output audio through both the soundbar as well as its in-built speaker. However, volume adjustments aren't possible through the TV remote when using S/PDIF, and this was when we truly felt the lack of a remote. If you do buy the Mi Soundbar, be prepared to spend a bit extra on aftermarket cables for the best experience.

Switching to the source you want is easy; you just have to press the button for each one at the top of the soundbar, and a small indicator light above it will show that it's now active. With Bluetooth, there is a major setback on the Mi Soundbar — the device can only remember one Bluetooth device at a time. This can be an issue if you have your TV connected to the soundbar over Bluetooth, and also want to use it regularly to play music from your smartphone. 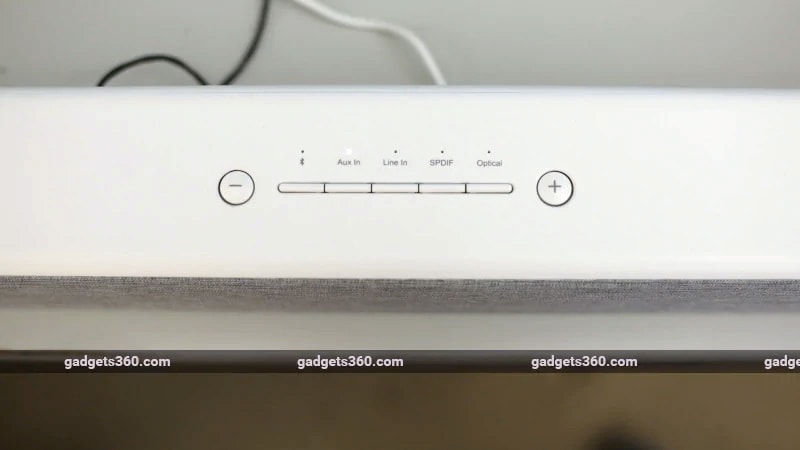 Soundbars are meant to give you an upgrade over the sound output of your TV, and whether the Mi Soundbar can do that was the big question we needed to answer with this review. Indeed, the Mi Soundbar did succeed in improving sound quality, and it did so well enough to justify spending Rs. 4,999.

The biggest improvement for us came in the volume; the Mi Soundbar was audibly louder than what we'd expect from most TVs, which have a rated output of around 20W. Furthermore, the front-firing drivers of the soundbar and the use of eight distinct drivers had a positive effect on the sound quality.

The tuning of the soundbar is geared for typical TV viewing; the mid-range is as defined as the lows and highs, and this ensures that you can hear voices clearly. Voices did tend to sound a bit sharp, particularly high-pitched ones, but in general, we were able to distinctly and clearly hear dialogue and vocals in music better on the Mi Soundbar than through the TV's speakers. Watching sitcoms such as The Big Bang Theory that largely rely on dialogue was enjoyable once we got used to the slight sharpness in the audio.

The Mi Soundbar has four passive radiators which do to some extent make up for the lack of a subwoofer. While bass and low-end rumble aren't quite as good as on more expensive soundbars such as the JBL SB250, the difference in quality is entirely forgivable considering the price. Action and thriller shows on Netflix such as The Umbrella Academy and Nightflyers, which rely on strong bass and deep, ominous background music for dramatic effect, sounded good enough on the Mi Soundbar. 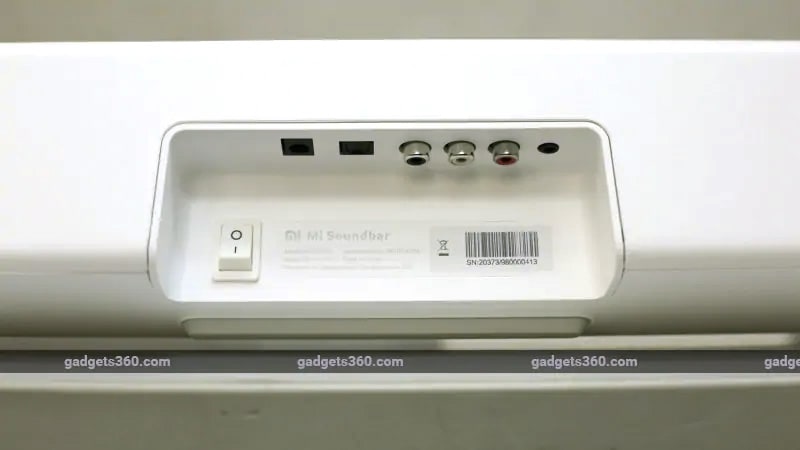 Turning the volume up too high had a detrimental effect on sound quality, causing a fair amount of distortion in the mids and highs. The Mi Soundbar was best used at reasonable volumes in our experience, where sound quality benefited from the use of the multiple drivers.

Additionally, the soundstage was wide, as compared to regular Bluetooth speakers, purely because of the length of this device and its multiple drivers. However, as compared to other soundbars which are usually designed to project audio widely, the Mi Soundbar felt a bit narrow in its soundstage.

The Mi Soundbar can also be used for music through any of its inputs, although this isn't quite what the device is meant to be used for. Music can sound a bit awkward because of the tuning, which emphasises the low-end and mid-range. It might be fine for occasional use, but the soundbar worked best for us when used with a TV.

Verdict
Xiaomi products have strong pricing as a common USP, and the Chinese company has managed to undercut its competition across the smartphone, TV, fitness, smart home, and lifestyle categories. The company's first home audio product, the Mi Soundbar, sticks to this aggressive pricing model to good effect. Indeed, you'd be hard-pressed to find a decent soundbar for even twice the price of the Mi Soundbar.

There are a few significant cons to this product though, including the lack of a remote, the inability to remember more than one paired Bluetooth device, and only an S/PDIF cable being included in the sales package. However, the Rs. 4,999 price tag makes these issues feel minor, and the Xiaomi Mi Soundbar is still absolutely worth it for anyone looking for an entry-level soundbar. If you do have a higher budget, options with Dolby tuning or dedicated subwoofers would be worth considering over the Mi Soundbar.

Tencent Posts Worst Ever Profit Drop on Gaming Freeze, One-Off Charges
Redmi Note 7 Pro vs Samsung Galaxy M30: Which One Should You Buy?