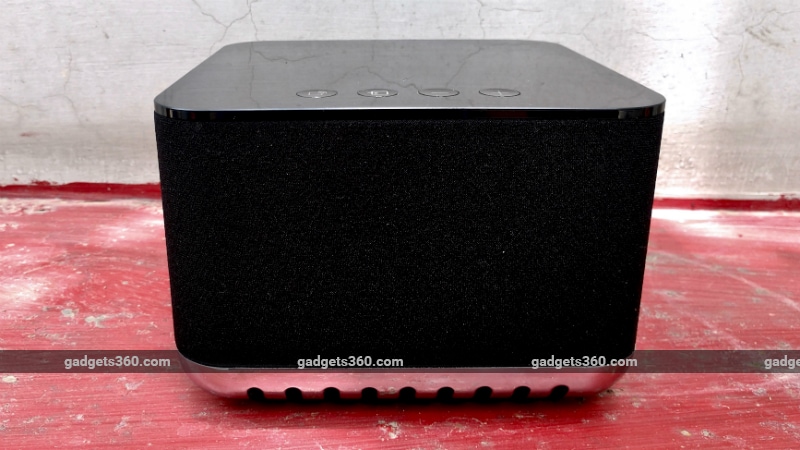 Like it or not, Bluetooth speakers are everywhere, and dedicated stereo setups are becoming extremely rare. Audio quality is slowly and steadily taking a backseat to convenience. Mass Fidelity, a Canadian startup, wants to challenge this with the Core, a unique wireless speaker system that promises to offer 'better than stereo sound'.

Priced at Rs. 33,999, the Core claims to offer stellar sound in a sleek and compact package. Can this petite little system compete with speakers twice its size? Let's find out in our full review.

The Core is made predominantly out of metal and has an extremely sleek and minimalist design. It's built well and is incredibly compact, measuring just 15x15x10cm. The box contains a quick start guide, a grey cloth case, a nifty little remote, and a microfibre cloth.

The top is a single piece of shiny acrylic that houses a small LED indicator and buttons to control the volume, change the input, and initiate multi-speaker linking. The front and sides are covered in fabric, and the inputs, which are quite comprehensive for a Bluetooth speaker, are located at the rear. There is a subwoofer output, auxiliary input, optical audio input, control input, power inlet, and a USB port through which you can charge other devices.

Two to eight Core units can be linked using a private 5GHz wireless network. This does not require you to have a Wi-Fi router, and can be initiated with the touch of a button. Unfortunately, we did not have multiple units of the Core to test the efficacy of this feature.The remote is a nifty little affair with just six buttons: one for power, two for volume, one for changing the source, one to mute all sound, and one to initiate multi-speaker linking. The remote is built well and has a glossy finish on the top that looks premium but collects fingerprints and scratches.

The Core has a Bluetooth range of about 30m and supports the SBC, AAC, and aptX Bluetooth codecs. In Bluetooth mode, the speaker system automatically connects to previously paired devices or goes into pairing mode if nothing is paired. The lack of aptX HD support is a bit disappointing. Most of our testing was carried out using a Moto Z2 Force connected via Bluetooth, but we did also hook up an Xbox One using an optical cable. As expected, the sound was a bit more detailed when using a wired connection (read on for more).

The Core is rated at 120 Watts and has five custom-designed high-output drivers. The biggest USP of this speaker is its wave field synthesis technology that promises to deliver an exceptional soundstage. While this might sound like a gimmick, it actually works wonders. The soundstage and imaging are remarkable for a speaker of this size. Upon listening to the first few seconds of Pink Floyd's 'Money', we could hear the clinking of coins and the sound of cash registers opening and closing all around us. The stellar spacing makes it feel as if the song is being performed live in front of you.

The Core should ideally be placed in the centre of a room with its back facing a wall. As there is no sweet spot, the sound signature and the sound stage don't change at all, no matter which part of the room you are sitting or standing in.

The sound signature is incredibly balanced and no frequency band outshines any other. This doesn't mean that the bass is thin and weak, but rather that the low-end is tight, punchy, and controlled. Mass Fidelity sells a subwoofer called the Core Sub (Rs. 25,999) which can connect wirelessly to the Core. Fans of predominantly bass-heavy genres might benefit from the extra kick offered by the subwoofer, but most others will be happy with the bass on offer here.

The mids are stellar, with vocals sounding incredibly forward, natural, and smooth. Due to the expansive soundstage, the bass and vocals sound incredibly organic and seem to fill up the room from every corner. The highs are clear, crisp and pronounced without ever being sibilant.

Mass Fidelity claims that the Core is not just for music, and can double up as a home theatre system. We connected the speaker system to our Xbox One using an optical cable, and were pleasantly surprised with the results. Just like a multi-channel setup, this little box immersed us in a wide soundstage with individual elements seemingly emanating from different corners of the room. While watching 'The Wall', a movie set during the Iraq War that has excellent sound design, we could hear the wind rustling across the sandy dunes, and rifles being locked and loaded, with impeccable detail.

The only area in which the Core disappointed us was its maximum volume level. The Core can easily fill a small room with sound, but struggles with larger areas. Those looking for room-shattering sound should look elsewhere.

In our tests, the speaker lasted 9 hours with music blasting at full volume. At a more moderate volume level, it should be possible to achieve the 12-hour figure promised by Mass Fidelity.

Verdict
The Mass Fidelity Core looks sleek, and is extremely compact. It sounds terrific when used with Bluetooth, and even better wired. The soundstage is remarkable for a speaker of this size, and it is suitable for music as well as movies. The only chink in its armour is the maximum volume level, which is slightly tepid.

The Core targets people who are very serious about sound quality. Although they aren't available in India yet, the Google Home Max and Apple HomePod will also eventually cost around as much, and will offer more smarter functionality, though we haven't tested them so we can't comment on their sound quality. The Core does not have any smart functionality or virtual assistant built in, but if you are looking for audio quality, there are very few faults to find. According to Benjamin Webster, one of the founders of Mass Fidelity, the company wanted to develop a no-frills speaker system that delivers the best sound quality, and for the most part, Mass Fidelity Core delivers on that promise.

At Rs. 33,999, this speaker is not cheap, but the class-leading sound quality on offer definitely makes it worth a buy. The Core is a undoubtedly a great option for those looking for a sleek and compact wireless speaker system that does not compromise on sound quality. This little black box truly raises the bar for wireless speakers.