JBL launched around two dozen new audio products in India about a month ago, many of which we first saw unveiled at this year's CES. We recently reviewed the Flip 4 which was a compact portable speaker, and today, we have the Pulse 3 which is the third version of JBL's popular speaker with built-in lighting effects.

With the third iteration of the Pulse, we finally get proper waterproofing and more powerful drivers for better sound. With a price tag of Rs. 15,999, the Pulse 3 competes directly with Sony's SRS-XB40, which also has a light show feature of its own. Let's see if you should consider this one instead.

The first Pulse speaker had a somewhat crude design and was quite average in terms of sound quality, considering the focus was on the LED light effects. The Pulse 2 refined the design with a finer weave for the wire mesh, which made it look more elegant. Now, the Pulse 3 has done away with wire mesh completely, and instead, only the lower 30 percent of the speaker is fabric-covered, while the rest is an acrylic covering for the built-in lights.

The speaker is about the size of a 750ml water bottle, and it kind of looks like one too. There are two exposed passive radiators at either end of the speaker, which vibrate to produce better bass. However, due to the lack of any protective covering, it's possible to damage these if you aren't careful. Since the Pulse 3 is designed to stand upright, the bottom radiator was blocked when placed on any non-flat surface, such as a mattress. You can use the Pulse 3 horizontally but it will roll around, so that isn't really recommended. 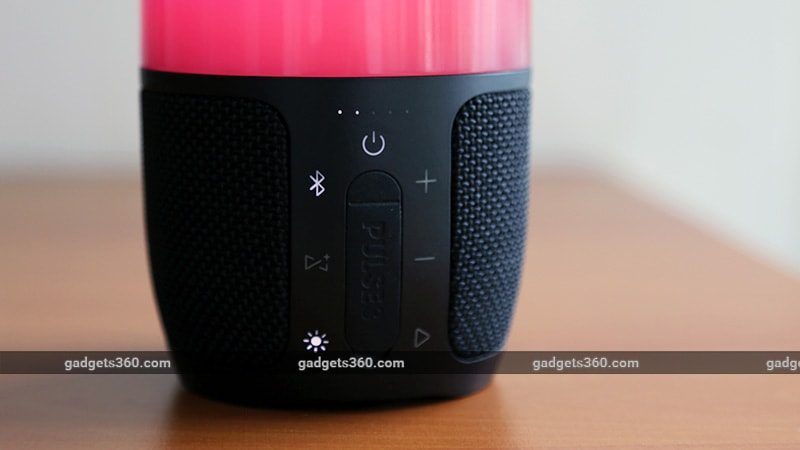 The ports and buttons are placed around the back. There's a power button accompanied by status LEDs which show you the charge level, and also play/ pause and volume buttons. The Bluetooth button lets you start the pairing process, the Connect+ button lets you pair multiple Pulse 3 speakers, and there's a dedicated button to change the light patterns. The playback control and the Connect+ buttons aren't backlit but the rest are.

Just like the Flip 4, the battery status LEDs only light up when you press any of the buttons at the back. The Pulse 3 uses its lights to show you the volume level, which is clever. All other customisations, including adjusting the brightness of the lights, has to be done through the JBL Connect app. There's also a rubber flap to protect the 3.5mm audio input and Micro-USB charging port.

In terms of specifications, the Pulse 3 uses Bluetooth 4.2 but doesn't support any advanced codecs such as aptX and AAC. There's no easy connectivity option like NFC either. There are three 40mm full-range drivers, which boast of a total output power of 20W. Frequency response is in the range of 65Hz-20,000Hz and there's a non-removable 6000mAh battery inside. The speaker is quite heavy at 960g, but that's still quite a bit lighter than Sony's XB40.

The JBL Connect app for Android and iOS lets you link multiple speakers (the company says that more than a 100 can be synced) or you could use two of them in a stereo configuration. The app also lets you adjust the brightness of the lights and change the function of the Play button, to either play/ pause music or to summon your phone's voice assistant (either Siri or Google Assitant). You can also use the Pulse 3 as a speakerphone, as it has a built-in mic. 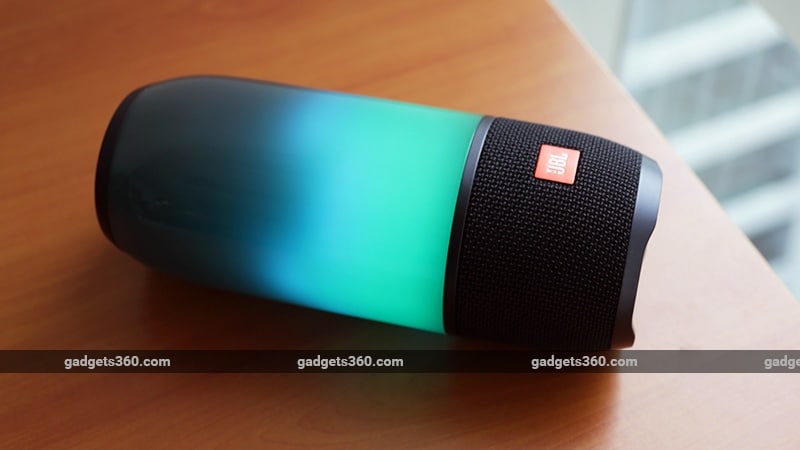 Tapping the speaker icon lets you customise the lighting effects. You can choose from Jet, Fireworks, Equaliser, Rave, Rainbow, Campfire, and Wave. You can set a custom pattern too, but the presets look much better. The colours can also be changed using an RGB pallette, or you can even use your phone's camera to match the colours around you.

The JBL Pulse 3 can have two active connections at a time, so two people can take turns playing music. Playing a track from the second phone immediately stops the currently playing track. The light show changes depending on the beat of the music, and colours keep cycling through your chosen palette. The light show can be switched off by holding down the corresponding button on the speaker. Just like the JBL Flip 4, you can change the function of the Play button to engage your phone's virtual assistant, but this disables the play/ pause function, which isn't practical. Also, when you have two phones with virtual assistants connected and try to use the shortcut button, nothing happens, since the speaker isn't sure which one to engage.

We like the 360-degree sound produced by the Pulse 3. You can place it pretty much anywhere in your room and expect to hear it well enough, as sound reflects off nearby surfaces. Voice calls are also handled decently well although you'll have to be close to the speaker for the person on the other end to be able to hear you clearly. We didn't find much of a difference in audio quality when using a wired connection rather than Bluetooth. 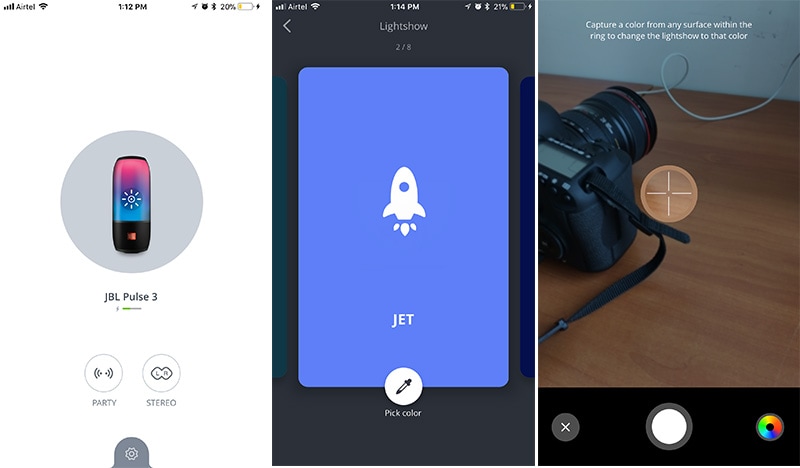 The Pulse 3 can get really loud, which is quite impressive given it's relatively sleek design. The radiators work furiously when listening to bass-heavy tracks, although the bass begins to get drowned out a bit above the 90 percent volume level. At low volumes, the bass lacks kick but this works out well for certain electronic tracks such as Medicine Man by Zero 7. Vocals are crisp and the sonic signature is warm, but the mid-range is a bit lacking. This is also noticeable in other music genres like pop and rock. In Feel It Still by Portugal. The Man, the Pulse 3 produces punchy bass but instrument separation isn't very good. Vocal-led tracks such as Wind of Change by the Scorpions do much better, so if this is the kind of you music you'll be listening to a lot then the Pulse 3 should keep you happy.

The battery is rated to deliver 12 hours of playback time. With the bundled charger, it takes about four and half hours to completely charge the battery, which is a bit longer that we'd like. We played music on the Pulse 3 with the volume set to 50-60 percent most of the time, took a few calls, and had the lights set to their maximum brightness level, and we were able to get about 10.5 hours of playback time. That isn't bad, considering it has to power the LEDs, but for a speaker this size, we would have liked better battery life.

The JBL Pulse 3 costs Rs. 15,999, which is a bit expensive considering its average performance in the mid-range. On the plus side, the speaker does get pretty loud, is IPX7 rated, and has a fun light show feature. Battery life is decent but certainly could have been a lot better. If you're looking for something with serious audio performance and very good battery life, then there's the Sony's SRS-XB40. It weighs more, but it's rugged and offers better features such as LDAC and NFC, and it can also put on a light show to boot.

Further reading: JBL Pulse 3, JBL Pulse 3 review, JBL Pulse 3 price, JBL Pulse 3 price in India, JBL specifications, JBL
Roydon Cerejo Email Roydon
Roydon Cerejo writes about smartphones and laptops for Gadgets 360, out of Mumbai. He is the Deputy Editor (Reviews) at Gadgets 360. He has frequently written about the smartphone and PC industry and also has an interest in photography. With over a decade of experience covering the consumer technology space, he is also an avid sci-fi movie and TV show geek and is always up for good horror flick. Roydon is available at roydon@gadgets360.com, so please send in your leads and tips. More
Big Bash Cricket Review
Redmi 5 Plus vs Honor 7X vs Xiaomi Mi A1: Price in India, Specifications Compared

product The JBL Pulse 3 features an improved design and a fancier light show, but doesn't quite nail audio quality like we hoped. 3 out of 5 stars