Harman, now a subsidiary of Samsung, launched the JBL Go 2 in India in May earlier this year. The launch of this waterproof speaker came at the right time, as the monsoon season commences from early June in most parts of India. If you need a small portable Bluetooth speaker to play your favourite tunes without the fear of it getting damaged in the rains, this is now a potential choice. Priced at Rs. 2,999, is the JBL Go 2 the perfect companion for garam chai and pakodas? We are about to find out.

As its name suggests, the Go 2 is a second-generation product. The JBL Go was launched quite a while ago and had a boxy design compared to the slightly curved sides of the Go 2. It is also slightly bigger than the JBL Go, approximately the size of a bar of soap. It weighs 184g, making it lighter than the model it replaces. If you are style conscious, the Go 2 is available in 12 different colours, giving you plenty of option to choose from.

The shell of the speaker is made of plastic but has a rubber coating that helps it earn an IPX7 rating. Oh yes, it is water resistant and can handle being submerged into 1m of water upto 30 minutes. The Micro-USB port for charging and AUX input are both tucked away under a thick rubber flap so that water doesn't get inside the body if the speaker gets wet. That means that it can be used when you go swimming or when outdoors in bad weather. You can carry it with you while on a trek, but we think the JBL Clip 2 has a better design for that job. To ensure that everyone knows who makes it, the Go 2 has JBL logos at the front and the back. The front has a metal mesh that houses the driver, and has a single LED band in the centre just above the branding. While this LED is bright enough to be seen indoors, it isn't visible clearly when you are out and about. The top of the speaker is where all the controls are located. There are five buttons for power, Bluetooth pairing, volume, and play/ pause. There's also a microphone so that you can take calls using this speaker. In the box, you get the JBL Go 2 unit and a Micro-USB cable for charging.

The JBL Go 2 supports Bluetooth 4.1 along with A2DP and AVRCP which means that you can control your music using its buttons. At the heart of the speaker is a 40mm driver. It has a rated output of 3.1W and a frequency range of 180Hz-20,000kHz. With the frequency range starting at 180Hz, it is clear that the speaker won't be able to reproduce a large part of the bass frequency range. The battery capacity is 730mAh.

A quick tap of the power button is enough to power up the speaker. You'll need to long-press the Bluetooth button to enter pairing mode. The LED glows white when the speaker is powered on and blinks when it is in ready to pair. Long-press either of the volume buttons to increase or decrease the volume. Sadly, these buttons do not also let you skip or play the previous song. But if you do want to skip a song, you can double-tap the play button. We paired the speaker with a Google Pixel 2 XL (Review) and a MacBook Air during our testing period. 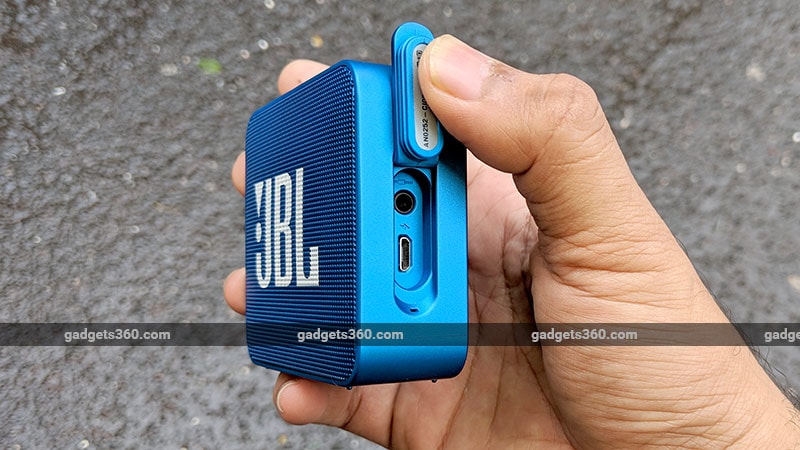 In terms of audio quality, the JBL Go 2 is an average performer considering its size and price. Listen to it and you will notice that the lower mid-range has been boosted to make up for the loss of bass frequencies. The mid-range is also strong, which is a plus, and we could hear dialogue clearly when watching Sacred Games on Netflix. The speaker gets loud enough to fill a 150 sq.ft. room at higher volumes. Listen to complex tracks such as Paradise City by Guns N' Roses, and it isn't easy to distinguish between different instruments. The sound occasionally clips when listening to a few tracks at full volume. If you listen to a genre that focuses on vocals or for watching movies, you should be happy.

The Go 2 has an inbuilt microphone that makes it possible to answer calls. We could hear people who called us clearly, and they could hear us as well, though they did mention that we sounded a little distant.

JBL claims five hours of continuous playback time per charge, and we got a little longer than that while running it at 80 percent volume. In terms of battery life, the Go 2 is at par with similarly priced speakers such as the X-Mini Xoundbar and the Toreto Aqua, but that still isn't a lot. At least it turns itself off if you aren't listening to anything for 15 minutes, which is handy and helps save some power when it's left idle. Run the battery flat and you will need to leave it plugged in for close to two and a half hours to top it up completely. There is no way to check the amount of power left, other than the status LED that flashes red when it is low. The display battery level was not displayed when the unit was paired with our Android smartphone.

Verdict
The JBL Go 2 is priced at Rs. 2,999 and offers decent audio quality along with water resistance. If you don't set your expectations too high, you will be satisfied with the sound quality that the Go 2 delivers for the asking price. If you want to listen to your tunes without the fear of the elements when outdoors, this could be a good choice. On the other hand, if you need better audio quality and are willing to spend a little extra, do consider the UE Roll 2, which has recently received a price cut.

Further reading: JBL Go 2 Review, JBL Go 2 Price, JBL Go 2
Aditya Shenoy Email Aditya Aditya Shenoy writes reviews smartphones, wearables, headphones and speakers for Gadgets 360, out of Mumbai. Aditya is a reviewer for Gadgets 360 and has written extensively about smartphones, software updates, and upcoming devices. Aditya is available on Twitter at @adishenoy, and you can mail him at adityashenoy@ndtv.com, so please send in your leads and tips. More
WhatsApp Will Now Label Forwards in a Bid to Combat Misinformation
Tencent's WeGame In Development for International Launch
product The JBL Go 2 is a small IPX7-rated speaker priced at Rs. 2,999, but should it be your first pick if you're on a budget? Read our review to find out. 3 out of 5 stars