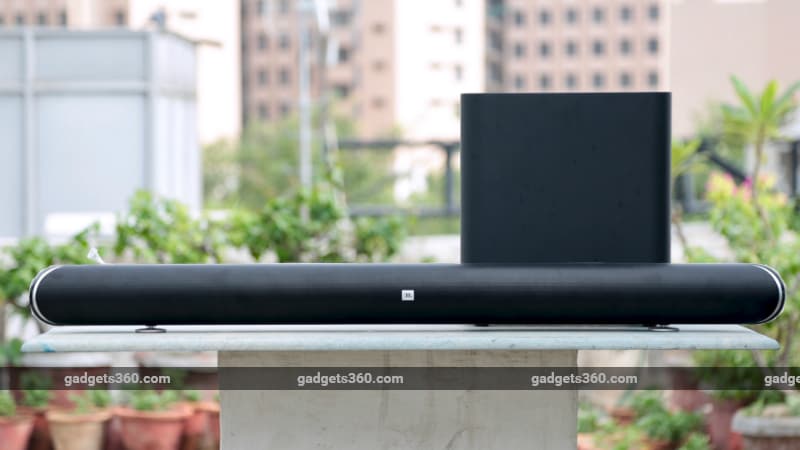 Soundbars are a convenient and hassle-free alternative to traditional home theatre systems. They offer cinematic sound without the headache of wires and without needing a lot of space. A lot of people might know JBL for its eclectic lineup of Bluetooth speakers and headphones, but the company makes decent soundbars as well.

The JBL Cinema SB450 soundbar has a few tricks up its sleeve, such as Bluetooth connectivity, 4K video passthrough, and the ability to pair with other JBL Bluetooth speakers. It has a hefty wireless subwoofer, a plethora of digital inputs, and a rated power output of 440 Watts. Although the Rs. 39,999 sticker price is a bit steep, it can be found online for less than Rs. 30,000.

The retail package contains a sleek but really long soundbar, and a big and bulky wireless subwoofer. Weighing in at 9.5 kg, the woofer is large and heavy. It is finished in matte black, and has a no-nonsense cube-like design devoid of any flair. There is an 8-inch downward firing woofer and a 200 Watt amplifier.

The soundbar itself is covered in a fine steel mesh and looks quite premium. Underneath the mesh are an undisclosed number of 2.25-inch transducers which deliver a combined 240 Watts of power. There are eight buttons on the top of the soundbar: one for power, two to control the volume, one for changing the source, one to turn on Virtual Surround Sound, one for JBL Connect, one for a feature called JBL SoundShift, and one for Bluetooth pairing. JBL Soundshift allows you to instantly switch between Bluetooth and any of the connected inputs.

Both the subwoofer and soundbar are built like tanks, and the quality of materials used is top-notch. There are no bulky external power bricks to deal with, as both units have built-in power supplies. The subwoofer pairs with the soundbar as soon as it is switched on. There is also a button at the back of both units labeled 'Subwoofer Pairing' for manual pairing in case something goes wrong, but we never had to use them.

There is a comprehensive array of inputs on the rear of the soundbar. There are three HDMI inputs and one HDMI output with support for ARC (Audio Return Channel), which sends television audio to the soundbar through the same HDMI cable. In addition, there is an optical S/PDIF audio input, a power inlet, an auxiliary input, and a USB port meant for servicing the soundbar. We would have liked to have one additional optical input, but most people will be well served by the options available.

The Cinema SB450 also supports Bluetooth and we were able to pair our Moto Z2 Force (Review) without any trouble. There is a dedicated Bluetooth button on the remote as well as on the top of the soundbar. When the button is pressed, the soundbar automatically connects to previously paired devices, or goes into pairing mode if none are available. High-quality wireless codecs like aptX are not supported, which is disappointing.

The subwoofer has a few advanced controls at the back, which are rarely seen in this price range. There is a knob to control 'crossover' and a toggle for 'phase'. The latter ensures that the soundbar and subwoofer are in sync with each other. Basically, if you place the subwoofer near the soundbar, you should set the phase to 0. If it is going to be placed behind your ideal seating position, the phase should be set to 180.

Crossover basically refers to the point at which frequencies are divided between the soundbar and the subwoofer. If the setting is perfect, both components will work in harmony with each other and sound like a single setup. Ideally, it should be fine-tuned by ear, but you can just leave it at the default position if you like.

JBL advertises the Cinema SB450 as a 4K soundbar. This might confuse a lot of buyers as 4K is a video standard which should have nothing to do with a soundbar. What it means is that the Cinema SB450 supports the relatively new HDMI 2.0a and HDCP 2.2 standards. You can use your soundbar as a passthrough for a 4K-enabled Blu-Ray player, game console, or set-top box without any loss in video quality, even when playing 4K/ UltraHD content with HDR (high dynamic range).

The credit-card style remote feels cheap and is the single most disappointing aspect of the JBL Cinema SB450. It's nearly impossible to tell the buttons apart in the dark, and we had to keep turning on the lights while watching a movie to figure out which buttons control the volume. The buttons are hard to press and the wording underneath is also microscopic. Some people will really struggle to make out which button is which. The remote is also way too small and easy to misplace.

We connected the speaker system to our Xbox One S using an optical cable, and were pleasantly surprised with the quality of bass on offer. The bottom-firing subwoofer is the highlight of the set, and delivered deep and thunderous bass that never distorted or became boomy. The amount of bass was enough to shake the walls of our room, and the quality was also impressive. It's not all about the bass though. The soundstage is excellent and the two units do a great job of distributing sound across the room. The experience obviously falls short of a proper surround-sound setup with five or more speakers, but comes close.

While watching 'Train To Busan', a critically acclaimed South Korean zombie movie set almost entirely inside a train, we could hear the screeching of its wheels on the tracks, the crunch of breaking bones, and the sound of tearing flesh, all with impeccable detail. The thunderous bass accentuated the booming score and kept us on tenterhooks throughout the film. We also watched a few TV shows such as Dirk Gently's Holistic Detective Agency and The Tick, and were quite pleased with the attack and drive delivered by the system. While playing Forza Horizon 3 on our Xbox One S, the JBL Cinema SB450 did a stellar job with the pulsating bass-heavy soundtrack and the ferocious engine sounds.

Where the JBL Cinema SB450 falters is the mid-range, which is repressed and hollow. In movies, this causes dialogue to sound a bit thin. The biggest impact though is felt when listening to music. The weak mid-range, combined with the thunderous bass, results in a sound signature that is lopsided. This is great for EDM, R&B and some pop tracks, but genres such as Jazz, Blues, and Rock sound quite average. The highs also tend to become slightly screechy at high volume levels when listening to music.

There is a button on the remote labeled 'Harman Volume', that is supposed to make dialogue louder and easier to understand. In our experience, it did not make much of a difference. In fact, as there is no indicator of any kind for this feature, we found it hard to even gauge whether it was enabled or not. Bose has a similar feature on its Solo 5 soundbar, and that implementation is far superior. If you have trouble hearing dialogue in movies and TV shows, the JBL Cinema SB450 might not be the right choice for you.

A feature called 'Virtual Surround Sound' aims to artificially expand the soundstage and is best kept disabled. It makes the mids even poorer and adds a considerable amount of echo. The JBL SB450 also supports JBL Connect, which allows you to daisy-chain two JBL Bluetooth speakers wirelessly and multiply the sound. Sadly, we did not have any compatible speakers on hand to test this feature.

Verdict
Those looking for a fuss-free home theatre system with explosive bass and a good soundstage should definitely consider the JBL Cinema SB450. The subwoofer is the highlight of the package and the fact that the soundbar works seamlessly with 4K TVs adds to its overall appeal.

All is not smooth sailing though. The remote is is cheap, tiny, and nearly impossible to use in darkness. Also, the SB450's weak mid-range and shrill highs make it a poor choice for music. The Mass Fidelity Core, which retails for Rs. 33,990, lacks the room-shaking bass and volume of the JBL Cinema SB450, but delivers crisp and clear sound, and is suitable for music as well as movies.