When the Apple iPhone 7 did away with the 3.5mm headphone jack, people were understandably upset. Of course you had the option to buy any other smartphone, but the move from one of the biggest trend-setters in the industry was a sign of things to come. It also led to the revival of the idea of the personal audio player, with a renewed focus on sound quality. Today, high-resolution audio players are in fashion once again.

Using wired headphones with a good digital-analogue converter (DAC) is still considered by many to be the best way to listen to music while on the go, and a strong part of that setup is the source device. Today, we're reviewing a product that hopes to replace the smartphone as your primary source device for music — the Fiio M6. Priced at Rs. 14,999, the Fiio M6 costs more than a lot of very good smartphones, but its hardware is geared for one key purpose. How does it perform, and can it make a positive impact on your portable audio experience? We review to find out. 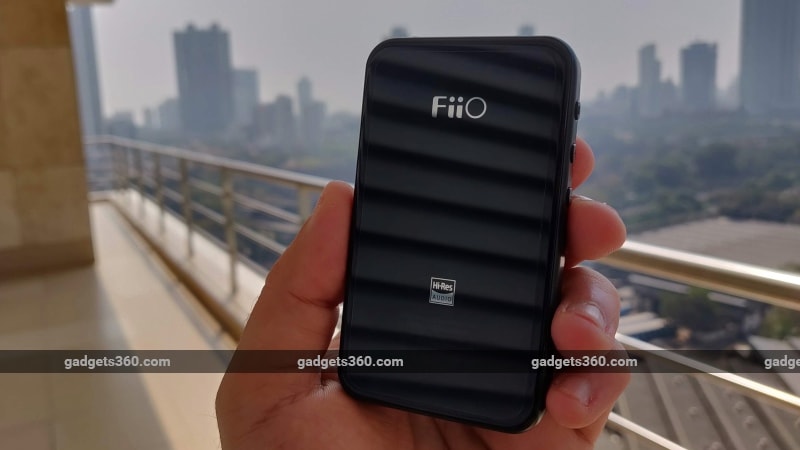 Portable media players should ideally be small, since it's presumed that you will be using one alongside a smartphone. The Fiio M6 does have size as an advantage, easily fitting in the palm of a hand. It's easy to store in a pocket or backpack, and all controls are conveniently within reach  even for people with small hands. The frame of the Fiio M6 is metal, and it has toughened glass at back.

The top of the M6 has the 3.5mm jack and power button, the left side has three buttons for play/ pause, volume up and volume down, the right side has an open slot for a microSD card, and the bottom has a USB Type-C port for charging, data transfers, and USB DAC functionality. At the front is a 3.2-inch 480x800-pixel touch screen, and just above it is an LED indicator light.

The device runs on custom firmware based on Android, with the UI simplified to focus on music playback. You get the main Fiio Music app along with other apps for file management, a gallery, and settings. Four apps for music streaming services are pre-installed — KKBox, Moov, NetEase Music, and Tidal — and can be uninstalled if you don't need them. None of these services are officially available in India, so you'll probably want them out of your way. Perhaps the only real issue with the interface is that it appears a bit cramped and poorly laid out. 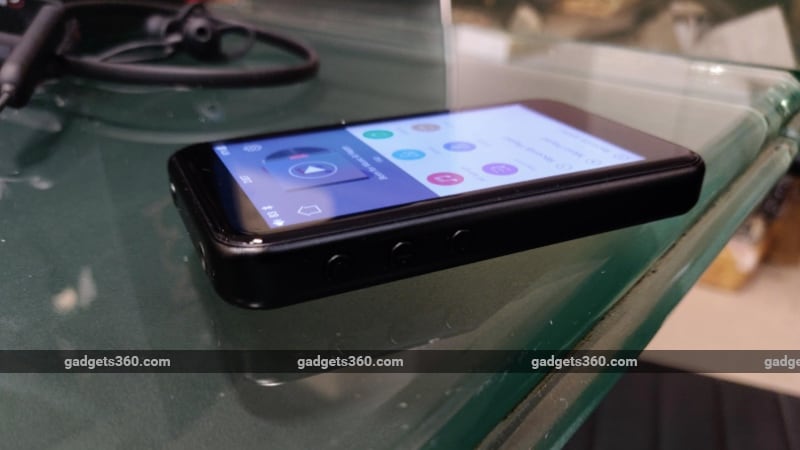 Additionally, a few popular music apps and streaming services including Spotify, Deezer, and ES File Explorer have been whitelisted and can be side-loaded onto the device, if you intend to use them.

The M6 is Wi-Fi enabled, and can thus be used to stream music from compatible apps. Apps such as Tidal — which is focused on high-resolution music streaming — will be particularly useful to users who have subscriptions and want access to high-resolution audio content over the Internet.

The Fiio M6 has a 1,200mAh battery, which can be fully charged in about 2 hours and 30 minutes with a 10W charger, although the adapter isn't included in the box. During our testing, the Fiio M6 ran for about 11 hours on a full charge with mixed usage as a standalone player, which is decent. During our time with the device, we used it with wired and wireless headphones, as a USB DAC, and as a Bluetooth receiver.

For such a small device, the Fiio M6 packs in some impressive hardware. Powering the device is the Samsung Exynos 7270 processor, along with an ESS Sabre 9018Q2C digital-analogue converter. This 32-bit DAC is typically used in home theatre receivers, Blu-Ray players and digital audio workstations, among other applications. You also have Bluetooth connectivity on the device, with support for the AptX, AptX HD, and LDAC codecs. 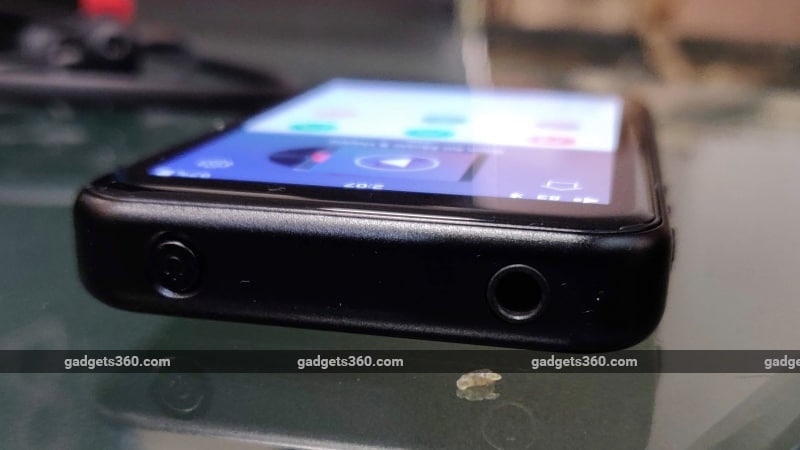 Interestingly, the Fiio M6 is also AirPlay compatible, which lets you use it as a wireless DAC with iOS devices. You can therefore send audio wirelessly using the AirPlay protocol from an iPhone or iPad to the Fiio M6, which will then use its DAC to convert the signal to analogue for your wired headphones. It's a function that serves a very specific purpose, but might be a handy feature for some.

You can similarly use Bluetooth to connect to any compatible device such as a smartphone or computer and have the Fiio M6 work as a  Bluetooth receiver, taking over DAC duties. It's a highly versatile device that works in multiple use cases, although it works best as a standalone audio player.

Speaking of its ability as a standalone audio player, the Fiio M6 offers support for a wide range of audio formats, including standard lossy formats as well as high-resolution and lossless file formats. This includes ISO, DSD, DSF, DFF, APE, WAV, FLAC, M4A, WMA, ALAC and MP3, to name a few. The device has 2GB of built-in storage and supports memory expansion through its single microSD slot up to a theoretical 2TB. Interestingly, audio output over USB is also supported, and the M6 is listed to work with external DACs, but did not work with any of the USB Type-C headphones we tried it with.

We used the Sennheiser Momentum On-Ear headphones and 1More Triple Driver earphones with the Fiio M6 for our testing. We used various file formats, including DSD, FLAC, M4A and MP3.

We started out using the device as a standalone audio player with the tracks stored on a microSD card. Starting out with the Sennheiser Momentum headphones and a DSD version of Astor Piazzola's Touched By Tango series, the Fiio M6 played its part in producing a lively, detailed, and enjoyable sound. Of course, credit for sound quality largely goes to the headphones, and we used a pair that has been  rated highly for its performance. 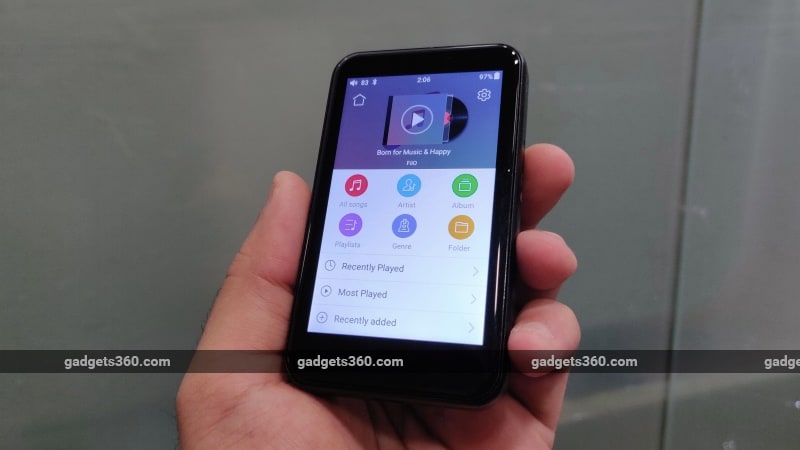 The double bass at the start of the track felt true to its intended muted aggression, lending some punch and low-end grunt to the performance. The various instruments and elements of the track felt distinct, and what was particularly interesting was how the volume levels were different for individual elements. With a jazz band version of Sting's Walking On The Moon (an M4A file), it was excellent to hear the timbre and grunt of the low-end of the saxophone and drums, even as guitar elements were softer, and yet distinct. The ESS Sabre DAC can largely be credited for the excellent separation, timbre, and lively nature of the sound.

Switching to the 1More Triple Driver earphones and Mylo's In My Arms (FLAC format), the sound was louder, but the Fiio M6 once again demonstrated its ability to keep up with the pace of tracks while continuing to offer an open, well-separated, and clean output. True to the nature of the headphones, the sound felt balanced with detail in the highs and mids, all while retaining a tight low-end. The Fiio M6 proved to be strongly neutral in its output, allowing the headphones to decide the sonic signature. 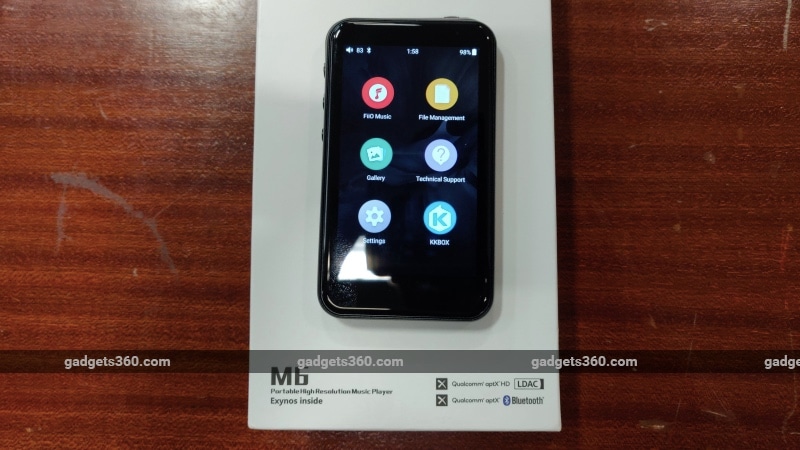 We used the Fiio M6 as a USB DAC with an Apple MacBook Air, and the process was simple enough. Once plugged in, you simply have to switch the input from Storage to USB DAC through the quick settings menu (pull down from the top) on the Fiio M6, and switch the sound output to the M6 in your computer's audio settings, if necessary. While this did make a difference to audio quality, it wasn't very significant with tracks from Apple Music or compressed MP3 files. However, no matter what audio was played, the Fiio made a huge difference in the volume. Sound was louder and was able to retain its quality even at very high volume levels.

There was a big difference in sound quality when playing high-resolution audio files, since the Fiio's DAC was put to optimal use. Combined with the ability to get loud, the M6 makes a huge improvement in the listening experience. Gotye's State Of The Art on the Sennheiser Momentum headphones was handled well, and the Fiio M6 was at no point slowed down by the pace and busy nature of the track.

We also tested the Fiio M6 with Bluetooth headphones, and as a Bluetooth receiver. In the former case, aptX HD and LDAC compatibility are useful features and make the device a good wireless source as well. However, we didn't find any real improvement in performance over that of a smartphone such as the OnePlus 6T (Review), and indeed that isn't what the Fiio M6 should primarily be used for. In the latter case, the M6 is limited by the capabilities of the source device — in most cases it relies on SBC streaming, which impacts sound quality and negates the positive effects the DAC has on the sound. As with compressed audio files, its only real impact was felt with the ability to bump up the volume. 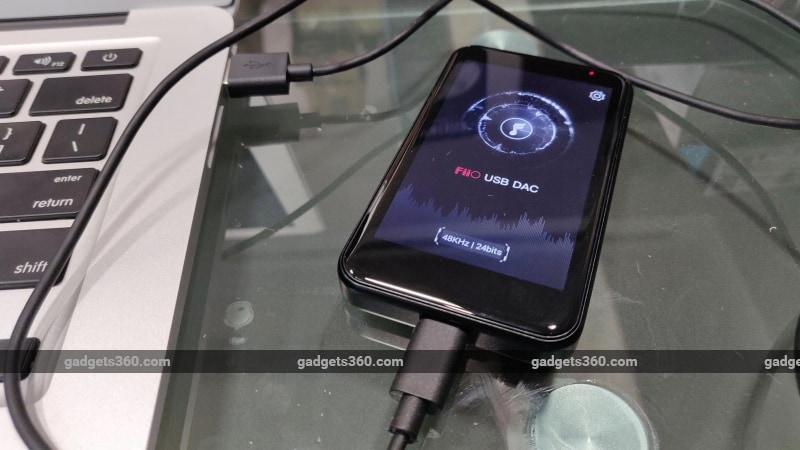 Headphones are the most important part of any portable audio setup, and your choice here can make or break your listening experience. However, that doesn't take away from the importance of the source device and DAC; using the right equipment can help bring out the best in your headphones. That's exactly what the Fiio M6 does — it provides a solid analogue signal so your headphones can work their magic. For its price, and when paired with headphones of equivalent quality, the device does a good job. The sound is open, well-separated and detailed, while leaving the sonic signature to the headphones to set.

While the additional Bluetooth functionality might come in handy for a lot of people, the Fiio M6 works best as a standalone audio player with wired headphones, and as a USB DAC. It's a great beginner device for anyone looking to get started on the audiophile path, and an excellent upgrade over even a flagship-level smartphone — whether it has a headphone jack or not.

product The Fiio M6 is a pocketable high-resolution audio player that promises to be a quality source device for your headphones. How well does it perform? 4.5 out of 5 stars