Breathe new lease of life into a classic.

Few pairs of headphones are quite as well respected and acclaimed as the iconic Audio Technica ATH-M50 and ATH-M50x. While originally positioned as studio monitors, these devices have become very popular even with regular consumers, thanks to their insightful sound and neutral sonic signature. Even now, many years after its launch, the ATH-M50x remains a popular choice of headphones priced under Rs. 10,000.

The company recently launched a much-anticipated updated version of these headphones with wireless connectivity. The Audio Technica ATH-M50xBT features the same clean, open sound as its wired counterpart, but costs a fair bit more at Rs. 18,450.

If you already own the wired version and don't want to pay full price just for wireless connectivity, you could always use a Bluetooth adapter, such as the Fiio BTR1K which costs much less. However, if you specifically want to upgrade an Audio Technica ATH-M50x, Fiio has a much more elegant solution available: the Rs. 3,490 Fiio BTA10, built specifically for use with this model of headphones. 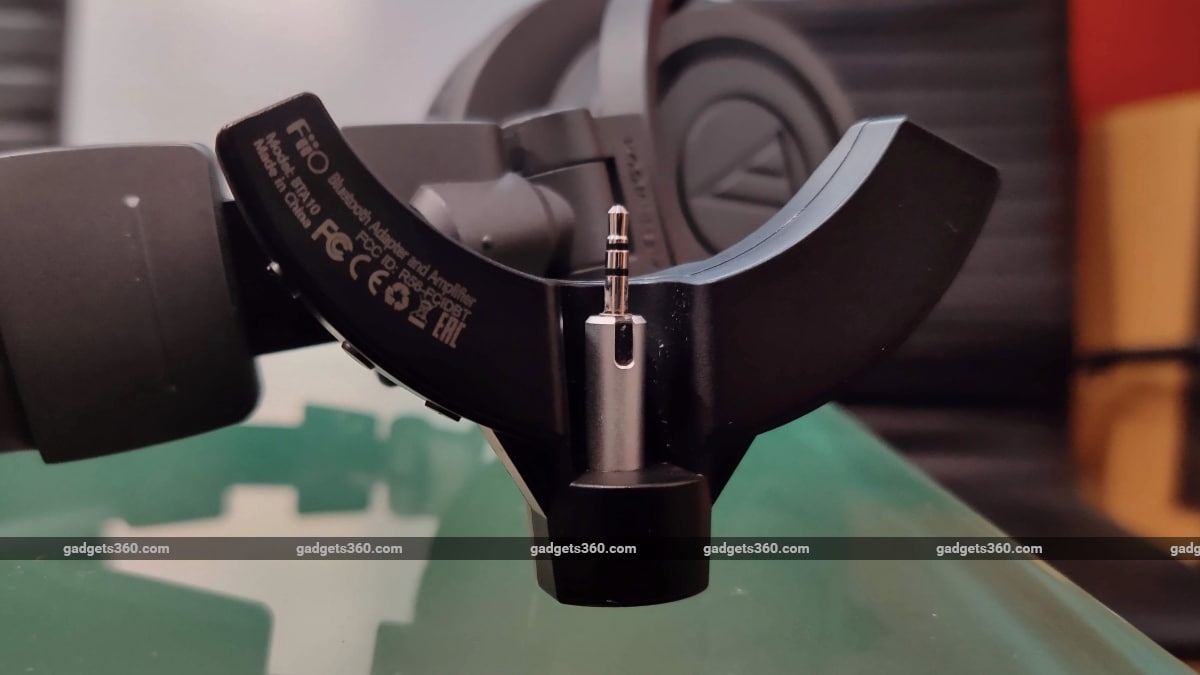 How does the Fiio BTA10 work?

The Fiio BTA10 has no cables; it's a claw-shaped plastic contraption with a 2.5mm pin sticking out in the middle. The BTA10, with its curved shape and cavity for the 2.5mm plug, is designed to fit perfectly onto the ATH-M50x's earcup Indeed, it lines up with the headset seamlessly, and the 2.5mm plug fits right where it needs to without anything sticking out.

While it does make one side of the headphones heavier, the Fiio BTA10 holds its own battery, a microphone for hands-free calling, and buttons to control playback and volume. One end of the device has a Micro-USB port for charging, and there's an indicator light on the front that displays its status. The Micro-USB port is located at the top of one of the claw ends, and you may need to detach the BTA10 to charge it conveniently.

The Fiio BTA10 uses a Qualcomm QC3005 Bluetooth chip with Bluetooth 5 for connectivity, and supports the SBC, aptX, and AAC Bluetooth codecs. The device ran for about seven hours on a full charge, which is roughly on par with what the Fiio BTR1K offers.

When it comes to sound quality, the Fiio BTA10 defers to the Audio Technica ATH-M50x to drive the show. The sonic signature and characteristics were largely the same as on the Audio Technica ATH-M50xBT, with the Fiio BTA10 simply handling wireless reception and digital-to-analogue conversion for the headset. Using the ATH-M50x with its cable and 3.5mm plug definitely sounded better than wireless connectivity, but the Fiio BTA10 is meant to add additional wireless capabilities to the headset, rather than replace its traditional wired connectivity.

The sound on the setup was clean, sharp, and lacking in any significant favour towards any part of the frequency range. The BTA10 was loud, and was able to properly drive the Audio Technica headphones even at high volume levels. Performance was also decent on voice calls, with the microphone on the BTA10 doing a decent job in all kinds of environments.

The Fiio BTA10 serves a very specific and niche use-case - turning a pair of Audio Technica ATH-M50x headphones into a wireless headset. If you have any other pair of headphones, this device physically won't fit - you'll need something like the Fiio BTR1K instead. While a BTR1K will work just fine with the Audio Technica ATH-M50x, the advantages that the BTA10 offers are its factor and convenience; you're doing away with all wires and getting a device that actually resembles and functions like a proper wireless headset.

If you do own a pair of Audio Technica ATH-M50x headphones, the Fiio BTA10 is the ideal accessory to go with it. If you're planning to buy the Audio Technica ATH-M50xBT, you could even save some money by buying the regular wired version and a Fiio BTA10, if you're okay with the significant difference in battery life (7 hours on the BTA10, versus 35 hours on the ATH-M50xBT) and the slightly unbalanced weight.

Further reading: Fiio, Fiio BTA10, Audio-Technica ATH-M50x
Ali Pardiwala Email Ali Ali Pardiwala writes about audio and video devices for Gadgets 360 out of Mumbai, and has covered the industry for a decade now. Ali is a Senior Reviewer for Gadgets 360, where he has regularly written about televisions, home entertainment, and mobile gaming as well. He is a firm believer in 4K and HDR on televisions, and believes that true wireless earphones are the future of the personal audio industry. Ali is available on Twitter as @AliusPardius and on email at alip@ndtv.com, so do send in ...More
Facebook's Digital Currency Plan Gets Hostile Reception From US Senators
Emmy Nominations 2019: Game of Thrones Tops With a Record 32 Nominations

product If you have a beloved pair of Audio Technica ATH-M50x headphones lying around, this nifty gadget will effortlessly make it wireless. 4 out of 5 stars