Established in 1989, Chord Electronics is a quintessentially British, high-end audio manufacturer that takes immense pride in its heritage. It makes DACs, CD players, network audio players, amplifiers, and other components that fit in with just about any premium audio setup. The company recently decided to tap into the growing portable audio segment with its first portable audio DACs, the Chord Hugo and Chord Mojo.

Today, we're reviewing the smaller and lower-priced Chord Mojo, which lets users step up to the portable audio big leagues at Rs. 39,990. This pocketable device offers amplification and top-end digital-to-analogue conversion for smartphones and PCs, and promises to boost your audio quality significantly. Read on to find out everything there is to know about the Chord Mojo in our review. 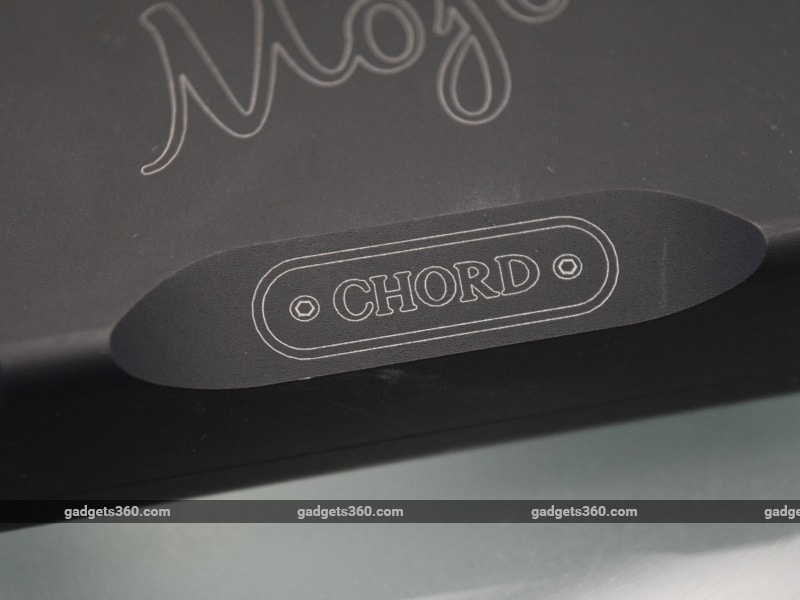 Chord Mojo design and specifications
The Chord Mojo is small enough to fit in the palm of your hand or slip into your pocket, and can be used with a variety of devices including PCs and smartphones. It's compatible with Android and iOS, as well as Windows and Mac OS. Using it with a smartphone requires either a Lightning, Micro-USB, or USB Type-C cable, depending on what phone you use, but these cables aren't provided in the box.

The Mojo is built entirely of aluminium, with its power and volume buttons located at the top. The buttons are colourless when the Mojo is switched off, but take on varying colours depending on the volume level and input in use. The balls of the buttons turn within the casing - this has no actual function, and the buttons can only be used by pressing down. The slab-like shape of the device and the rubber feet at the bottom make it excellent for desk use. 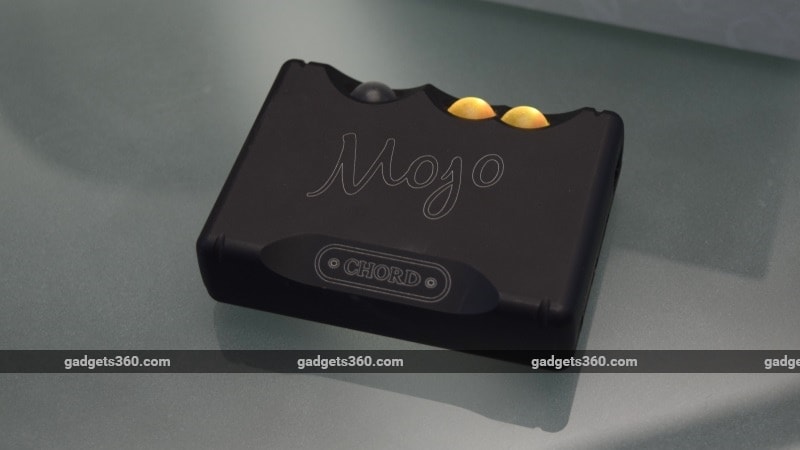 The left side of the DAC has two 3.5mm output sockets that can be used simultaneously to power two sets of headphones at the same time. The right has the inputs, with coaxial, Micro-USB, and optical options as well as another Micro-USB port for charging. It's possible to use the Mojo as a USB device while it's charging, with separate cables plugged into both ports.

The Chord Mojo can drive headphones with impedance ratings ranging from 4-800Ohms. It's claimed to be compatible with sample frequency rates ranging from 44.1 to 768KHz. PCM and dsd file formats are supported as well, as are popular formats such as flac, wav, and mp3, among others.

The device features an automatic operation mode, in which you don't have to select the input. The Mojo follows priorities to select the input, and unplugging the ones you aren't using causes the device to select whatever is plugged in. The battery of the device ran for about eight hours on a full charge, but took close to four hours to charge up fully again. The sales package includes just a simple USB to Micro-USB cable, but no power adapter, which is disappointing for a product at this price. 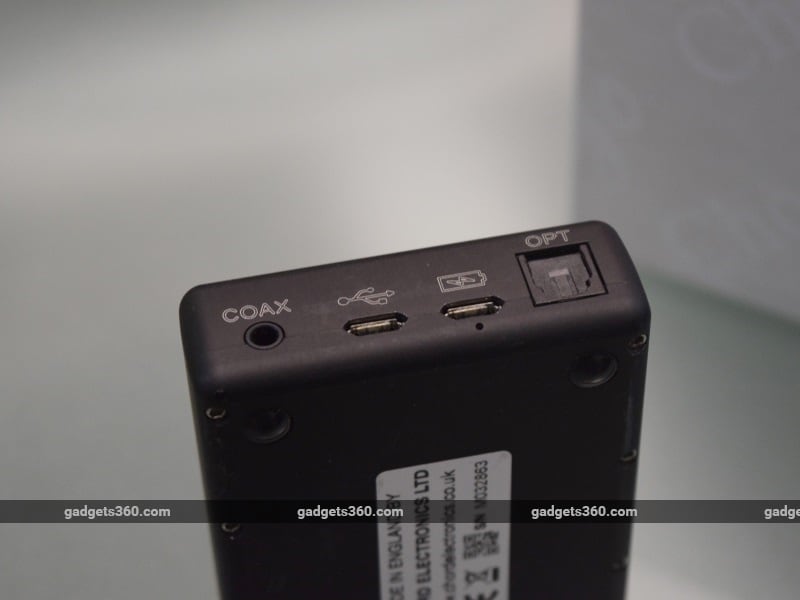 Chord Mojo performance
We used the Chord Mojo with an Android smartphone and a Windows PC during our test period, with both connected using the Micro-USB port. We used a variety of audio file formats and headphones, including the Trinity Atlas, Sharkk Bravo, and Bowers and Wilkins P3. Focus tracks for the review were London Grammar's Hey Now, an operatic version of Sting's Walking On The Moon, and Mylo's In My Arms.

Starting with Hey Now, the first thing we noticed was the ability of the Chord Mojo to make the mid-range a lot more coherent and clean. Hannah Reid's haunting vocal performance in the track feels much more present and real with the Mojo. In general, there's more depth and power to vocal performances, and the overall sound does feel more cohesive. The Chord Mojo tends to smooth over sounds, introducing refinement and eliminating the rawness that basic DACs and amplifiers tend to result in. With Walking On The Moon, we also found slight improvements in the sound stage of the headphones, with individual instrumentals from the track resonating more realistically. Percussion instruments also showcased the quality of the bass, which once again had some of its raw, unrefined characteristics eliminated. The result was a sound that was more suited to the audiophile seeking a truly neutral and realistic sonic signature, thanks to the balance and tonal superiority provided by the Chord Mojo.

With In My Arms, we noticed that the abilities of the Chord Mojo are highlighted significantly in busy tracks. The bass has a much tighter feel, while the mids and highs retain a sense of solidity. Additionally, the Mojo does tend to retain some of the qualities of the headphones and audio files in use. It sounds better with high-resolution audio, and tends to allow the headphones to have their characteristics exploited properly. The DAC simply adds coherence and tightness to the overall sound, which is excellent from the point of view of the listener. 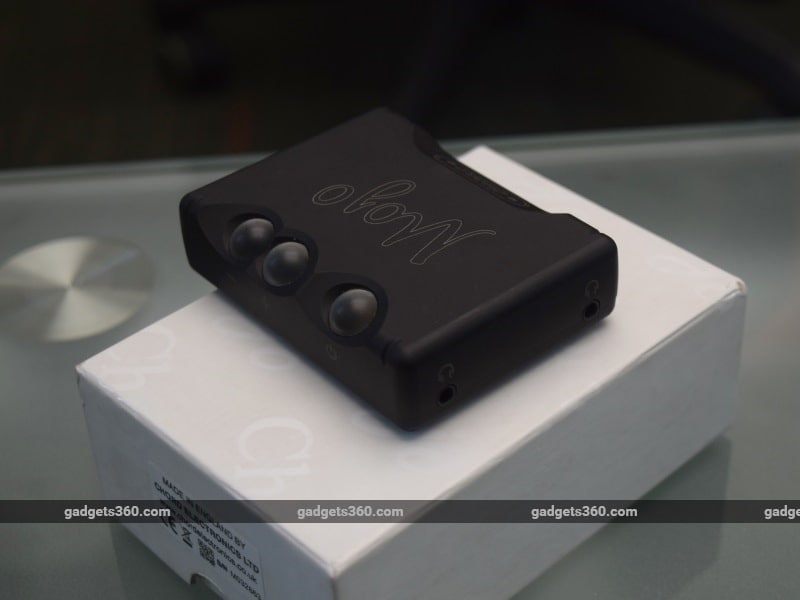 Verdict
The Chord Mojo is, without a doubt, a premium product. It's built fantastically, has simple and easy-to-use controls, and offers portability thanks to its compatibility with Android and iOS phones. It is by no means affordable for everyone, but this is a top-notch product from an established high-end audio brand and is meant for advanced users looking for an audiophile-grade listening upgrade.

The differences that the Chord Mojo makes to music are subtle, but noticeable and significant nonetheless. The device makes good digital audio and good headphones sound even better. The differences may be hard to perceive at first, but over time you'll realise how much better music sounds with the Chord Mojo added to your setup. If you're looking at investing in high-quality audio gear, the Chord Mojo is certainly worth trying out.

Further reading: Chord, Mojo, Chord Mojo Price, Chord Mojo Price in India, DAC, Amplfiier, Headphones, Audio
Ali Pardiwala Email Ali
Ali Pardiwala writes about audio and video devices for Gadgets 360 out of Mumbai, and has covered the industry for a decade now. Ali is a Senior Reviewer for Gadgets 360, where he has regularly written about televisions, home entertainment, and mobile gaming as well. He is a firm believer in 4K and HDR on televisions, and believes that true wireless earphones are the future of the personal audio industry. Ali is available on Twitter as @AliusPardius and on email at alip@ndtv.com, so do send in ...More
LeEco Epic 919 Superfans Festival: Le 2, Le Max 2, Le 1s Eco, Smart LED TVs on Offer
Samsung Galaxy J5 Prime Launched in India: Price, Specifications, and More