With TVs getting more affordable, users are also now more inclined to spend money on audio accessories to enhance their home entertainment experience. While traditionalists will prefer proper speaker systems, many buyers today like the convenience of a soundbar. It occupies less space, is easy to set up, and offers an upgrade over the TV's built-in speakers. But what if you could have both in a single product?

The key feature of the Boult Audio Bassbar A4 is its form factor — it can be used horizontally as a soundbar, or vertically as individual 2.0-channel tower speakers. When used as a soundbar, the two parts attach at their bases and can either sit on a table-top or be mounted on a wall. As tower speakers, the two halves use a pair of included stands to stay upright.

In either case, the right unit is the active speaker, while the left one is passive and needs to be connected to the right tower using a stereo RCA cable. There are two such cables included in the sales package — a short one that is suitable in soundbar mode, and a longer one which can be used when the speakers are placed apart from each other as towers.

The product itself has a simple design, with a plastic body and metal grille covering the speaker drivers. There are also Boult Audio logo badges at both ends, which seemed to be weakly glued on; these were already shifting about when we started using the speaker, and one of these eventually fell off. The mechanisms that let both halves of the unit stay attached to each other or their respective stands are well built, and we found them to be quite secure.

The Boult Audio Bassbar A4 doesn't have a battery of its own, and must be connected to a power outlet using its included adapter. The top of the active tower speaker has the controls for power, source selection, and playback, as well as a USB Type-A port and SD card slot. There is also Bluetooth 4.2 and a 3.5mm socket for Aux connectivity on the powered speaker. Oddly, there is a marking for a set of RCA inputs, but no actual sockets for this — our review unit just had a hole at back where such an input could have been. 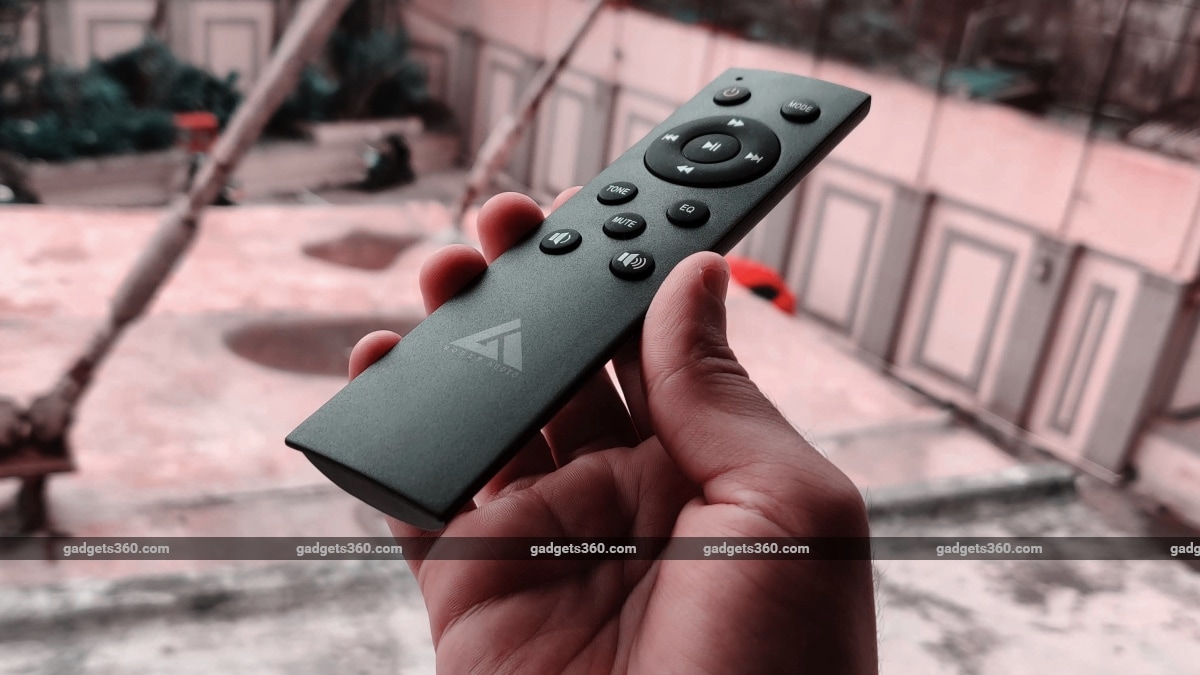 A remote is included with the Boult Audio Bassbar A4, and it was admittedly very useful for us during our time with the speaker system. It has all the necessary controls and worked well. Unfortunately the lid of the battery compartment wouldn't seal shut when batteries were inserted, further highlighting the poor build quality of the components.

The Boult Audio Bassbar A4 has a rated power output of 40W RMS, and Dolby Digital sound tuning. The two halves each have two wide-range drivers and a subwoofer, and only the SBC Bluetooth codec is supported for wireless streaming. On the whole, the Boult Audio Bassbar A4 comes across as a very low-tech, simple option, but it has a fair set of specifications and features for the price.

While the convertibility of the Boult Audio Bassbar A4 makes it versatile, sound quality leaves a lot to be desired. We used the Bassbar A4 as a soundbar as well as in its tower speaker configuration while watching TV and listening to music streamed from an Android smartphone. In all cases, the Bassbar A4 fell short of our expectations.

As a soundbar, the Boult Audio Bassbar A4 was quite disappointing. Unlike the similarly priced Mi Soundbar, the Boult Audio Bassbar A4 doesn't benefit from being properly tuned for use with a TV. While this soundbar did have a somewhat wide soundstage thanks to its length and the positioning of its drivers, sound tuning wasn't suitable for this kind of use at all. Voices sounded dull, while the intense soundtrack and effects at the beginning of Fantastic Beasts: The Crimes of Grindelwald were soft and unexciting. 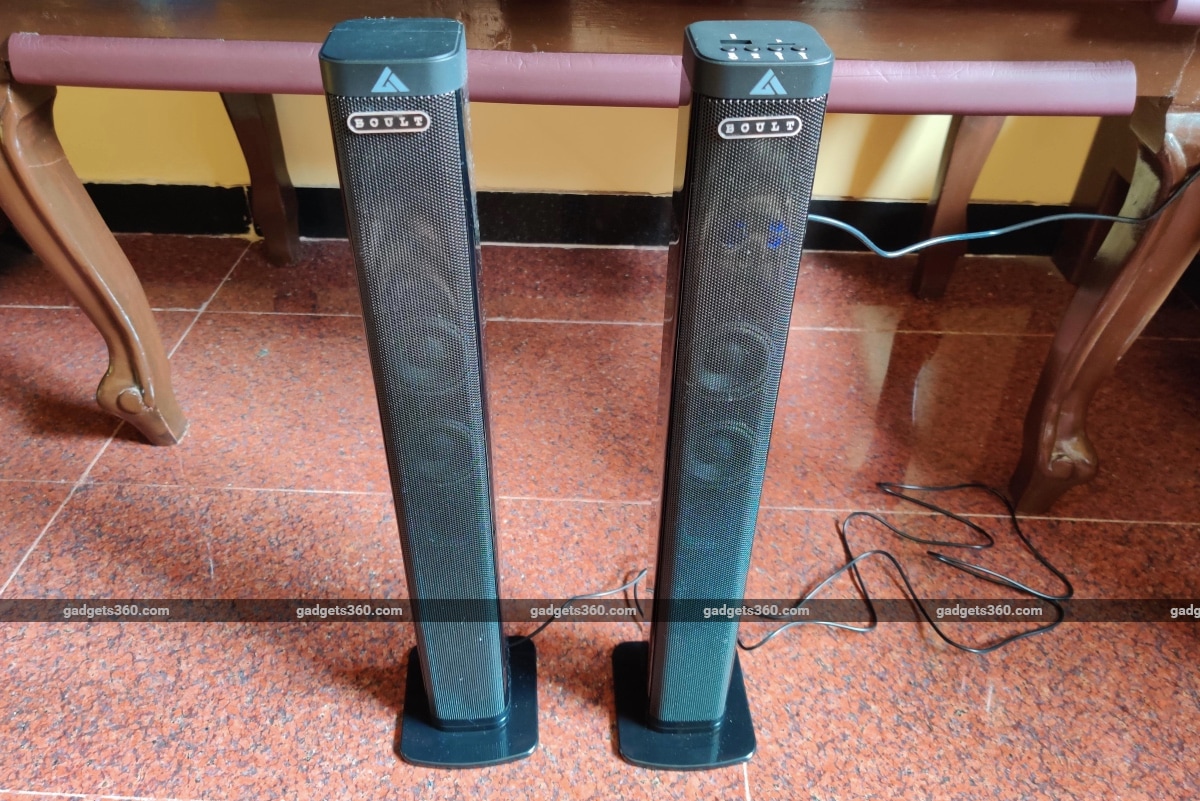 The lack of proper tuning on the Boult Audio Bassbar A4 for television use means that the speaker is simply providing an output for sound rather than contributing anything towards improving it. In fact, we didn't think it was even doing a very good job of that, since the Bassbar A4 was neither louder, nor better sounding than the speakers built into the LG TV that we were using it with. The only improvement we perceived was that the built-in subwoofers in the soundbar did contribute a bit to the low-end for a bit of rumble, which was a bit better defined than when using the TV alone.

Switching to the tower speaker form factor with an Android smartphone as the source device, the Boult Audio Bassbar A4 sounded a bit better. We quite liked the proper stereo separation and the spacious soundstage that the two halves of the Bassbar A4 offered, as compared to similarly priced portable speakers which have very little space between the two channels.

While the sound was considerably louder when using a smartphone as the source device, it still wasn't as loud as we'd have liked for a home entertainment setup. With the volume maxed out on both the speaker and our smartphone, the sound was only just about loud enough for us to listen to music at a distance of about seven feet. The volume was never high enough to become uncomfortable for a listener.

Listening to Fatal System Error by Notaker, we somewhat enjoyed its strong bass hits thanks to the subwoofer drivers, but there was little beyond the bass to enjoy. The sonic signature and sound quality were sub-par for a home speaker setup, and the lack of aggression, drive, and character in the sound made the Bassbar A4 a boring device to listen to music on. 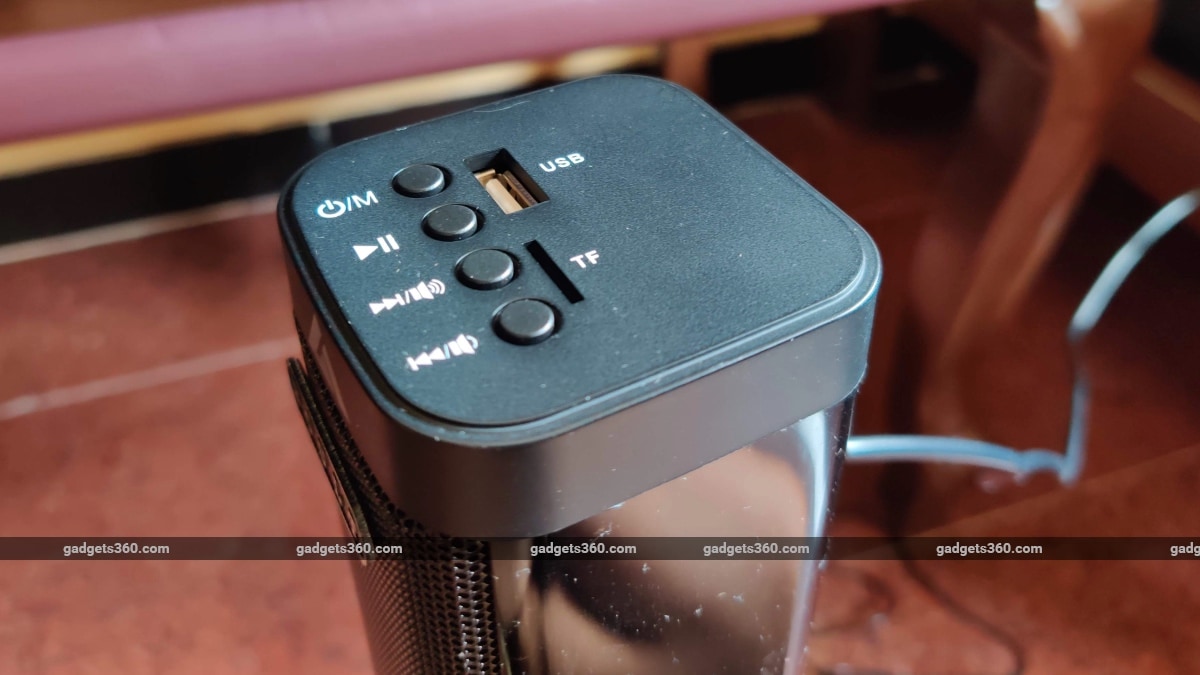 The Boult Audio Bassbar A4 is an interesting product at first glance because of its flexibility, but we found that it fell short both as a soundbar and as a two-channel speaker setup. While it's slightly better in the latter form than in the former, the Bassbar A4 still sounds dull and unexciting.

This product might make sense for someone looking for ease of use and the ability to be used both horizontally and vertically, but the plain sound and poor build quality make the Boult Audio Bassbar A4 hard to recommend even at its Rs. 3,999 price.

It would, in our opinion, make more sense to buy a dedicated soundbar such as the Mi Soundbar, and a separate two-channel speaker setup, or at least a decent portable speaker instead. The Bassbar A4 comes across as a confused product that tries to do too much, but gets very little right.

Further reading: Boult Audio, Boult Audio Bassbar A4
Ali Pardiwala Email Ali
Ali Pardiwala writes about audio and video devices for Gadgets 360 out of Mumbai, and has covered the industry for a decade now. Ali is a Senior Reviewer for Gadgets 360, where he has regularly written about televisions, home entertainment, and mobile gaming as well. He is a firm believer in 4K and HDR on televisions, and believes that true wireless earphones are the future of the personal audio industry. Ali is available on Twitter as @AliusPardius and on email at alip@ndtv.com, so do send in ...More
Carnival Row Trailer: Cara Delevingne, Orlando Bloom Are at the Centre of Amazon Prime Video’s Victoriana Fantasy Series
Rocket Lab Plans Reusable Booster for Satellite Launches