Bose is one of the best-known lifestyle audio brands in the country, and much like Apple, its products usually look fantastic and cost a lot. Recently, the company added a pair of Bluetooth speakers to its SoundLink series. The SoundLink Revolve and SoundLink Revolve+ boast of 360-degree sound and are IPX4 rated for water resistance.

Today, we'll be testing the Bose SoundLink Revolve, which is the smaller of the two. This speaker retails at Rs. 19,900, which is more than twice the price of similarly featured competitors such as the Ultimate Ears Wonderboom. No doubt you're paying a hefty premium for the brand name, but let's see if Bose has managed to deliver audio that is good enough to justify this as well.

The Revolve is crafted out of aluminium, and it looks and feels very pretty. It's about the size of a small canister, with a tapering top. The design is very simplistic, and the Lux Gray and Triple Black colour options are meant to blend in with your home decor. The speaker has soft rubber at the top and bottom to absorb shock in case you drop it. At the bottom of the speaker, we have a one-piece, circular rubber foot to keep it steady. Bose has provided a standard tripod mount as well, for more flexibility in placement. There are also four contact points here which can be used with an optional charging cradle that retails for Rs. 2,900.

Around the lower back, we have a Micro-USB port for charging and a 3.5mm auxiliary input for wired audio sources. Coming back up to the control pad, we have buttons for power, volume, Bluetooth and auxiliary selection, and a multi-function button for controlling media playback. The SoundLink Revolve also has an NFC pad beneath the Bose logo, and a microphone for voice calls. There's a battery icon which lights up when the speaker is charging, and corresponding LEDs light up for Bluetooth or auxiliary status, depending on which connection is active. The Revolve can also act as a USB speaker when connected to a PC or Mac. 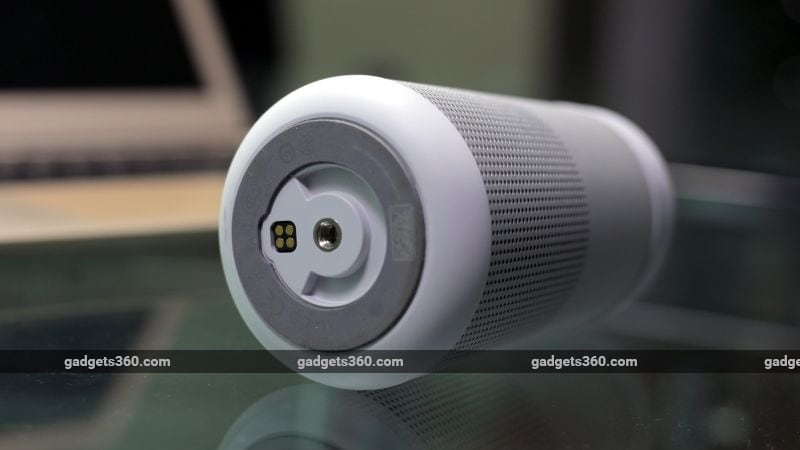 As usual, Bose doesn't provide much in term of technical information regarding the drivers used, but it does detail its design. In the middle of the chamber, we have a downward-firing full-range driver with an omnidirectional deflector just below it, which helps spread sound in all directions. There are also two passive radiators for better low-frequency output.

The Revolve is IPX4 certified which means it can handle a light rain shower or splashes of water but isn't meant to be submerged for extended periods of time. Bose promises a wireless range of up to 30 feet and battery life of up to 12 hours. At 660g, the Revolve has some heft to it but is still quite portable due to its small size. In the box, you get a USB cable and a power adapter.

The first time you power on the SoundLink Revolve, you'll be prompted to set the language for the voice prompts. These prompts are useful when you need to check the battery status or switch between functions. They can also read out the name of the device you're connected to and the name or number of whoever is calling you. The Revolve can connect to two Bluetooth devices simultaneously and can remember up to eight previously connected ones. A long-press of the multi-function button calls up Siri or Google Voice, on an iOS or Android device respectively. However, unlike Google Home or even the upcoming HomePod, you can't trigger the voice assistant with your voice, as you will need to use the button. This works well, even when the phone is locked (for both Android and iOS). It's not a terribly useful feature since you'll have your phone near you when listening to music anyways. 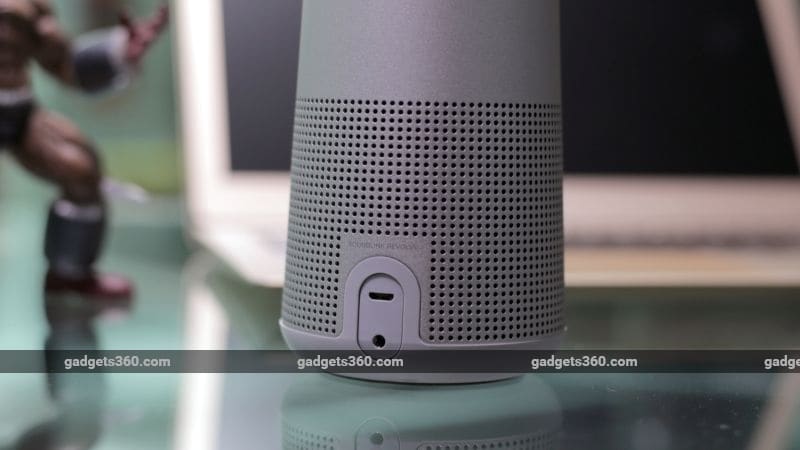 Listening to the SoundLink Revolve, the first thing that strikes you is how warm it sounds. It doesn't take much effort for this speaker to produce crisp highs and good levels of bass, and this shines through even at moderate volume levels. The mid-range is handled decently but the bass has a tendency of overshadowing it very easily once you start climbing the volume scale. Very high volumes cause the bass to drown out the mids completely. The bass is enhanced even more if you place the Revolve against a wall or on the floor. On the other hand, the Revolve produces room-filling sound without having to max out the volume.

When using a paired iOS device, increasing the volume from the device boosts the speaker's internal volume level in step. whereas for Android, once you max out your device's volume, you can still use the buttons on the Revolve to go louder. 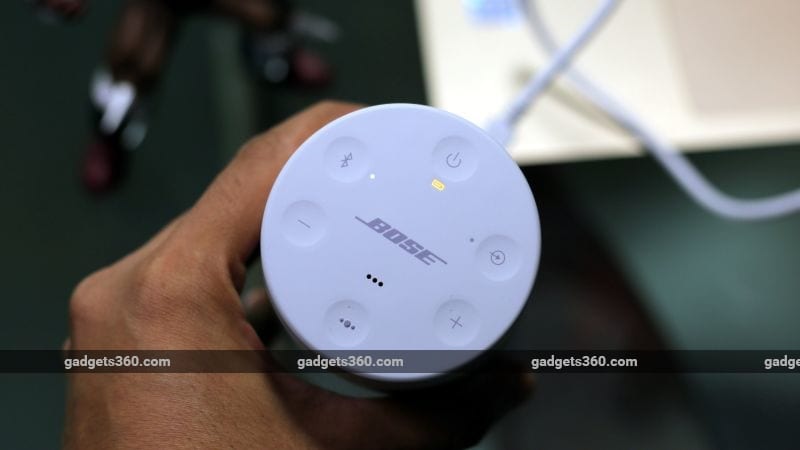 With Billie Jean, the Revolve faithfully reproduced the low-end kick with a good sub-bass. Treble was also detailed and soundstaging was very good. However, it didn't really let us take advantage of high-resolution audio, as we didn't find any audible difference between a FLAC file and streaming. In fact, we had to bump up the volume when playing our 24-bit Billie Jean test track, whereas the same song sounded much louder at the same volume level when streamed over the Internet.

There was also barely any audible difference when listening to the tracks over Bluetooth and a wired connection. This can be both good and bad because the Revolve seems to compensate for common audio sources; but on the other hand, it doesn't let high-quality music files shine.

Coming to more acoustic tracks, Farmer's Daughter focuses on Bowersox's vocal prowess and her guitar strumming ability. The SoundLink Revolve delivered sharp and legible vocals with good mids but the bass tended to feel a bit overpowering. The speaker seems to be better suited to electronic dance music. The bass didn't feel overpowering in Strangers, even at high volumes, and the vocals and mid-range were audible with decent separation between instruments.

Bose has a companion app for Android and iOS called Bose Connect, which makes it easy to switch between connected Bluetooth devices and also lets you sync two Revolve speakers together in Party Mode or Stereo Mode. The former duplicates your audio stream across two speakers to fill up more space, while the latter splits your tracks into left and right channels. You can also auto-generate unique names for each speaker, which will show up in devices' Bluetooth pairing lists. 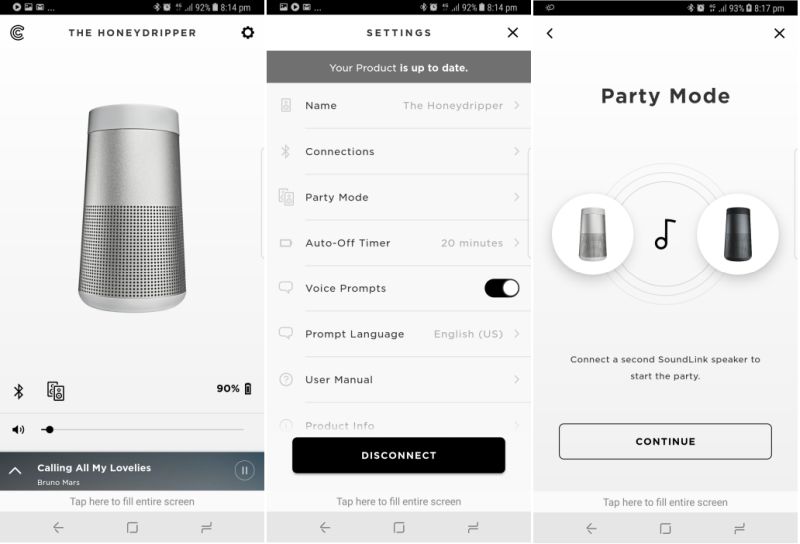 The companion app isn't a must-have, which should be a relief to some, as you can perform all its functions through button presses on the speaker itself.

The Revolve also handles voice calls very well. The Revolve has good range and as long as there isn't anything in the line of sight between the speaker and paired source device, there's no issue of music cutting out.

The built-in battery is rated to run for up to 12 hours on a single charge. In our tests, we managed to get 9 hours and 21 minutes of continuous playback which is well short of the rated 12 hours. Considering that we had the volume cranked up to about 70 percent most of the time, this isn't too bad. Charging the speaker from zero is a painfully long wait though, even if you're using the bundled adapter. It takes a good three to four hours to recharge completely. There are also no audible prompts to tell you when the battery is running down -  the speaker just shuts down when it's depleted.

For its size, the Bose SoundLink Revolve offers incredibly loud and warm sound. It handles low notes effortlessly without you having to blast the volume. However, as good as the speaker is with bass delivery, this can be its downfall as it simply devours the mid-range at high volumes in some tracks. Also, this is not the speaker for you if you enjoy high-resolution music files as there's little reward to be had.

The design of the driver is such that you don't need any surface to reflect off. In fact, it sounds best when placed in open spaces. Build quality is excellent, and we like that this device can withstand some degree of exposure to liquids. If we could change anything, we would have liked quicker charging. Perhaps Bose could have incorporated some sort of fast charging method.

The SoundLink Revolve is quite expensive at Rs. 19,900. Its bigger sibling, the Revolve+, costs Rs. 24,500 for which you get a larger driver and better battery life. The Bose SoundLink Revolve is a good-looking little speaker that manages to make nearly any audio source sound pleasant, and sometimes, that's all that matters.

product The Bose SoundLink Revolve is a neat little speaker that has can take pretty much any audio source and make it sound pleasant. 3.5 out of 5 stars