The Bose QC35 has so far been the benchmark pair of headphones for noise cancellation, and offers very good audio quality. No wonder then, that it's the product of choice for many frequent fliers. Last year, Bose launched a followup called the QC35 II, which added Google Assistant support. In fact, this is one of the first pairs of headphones (other than the Google Pixel Buds) to have Google Assistant integration built in, and is the result of a combined effort by Google and Bose.

The look and feel of the QC35 II is pretty much exactly the same as that of the QC35. We got the silver version for review but you can also buy it in black. The headphones are very light at just 240g because quite a bit of plastic has been used in the construction, though the outer portions of the ear cups use stainless steel. The headband has a metal lining on the inside too, so there's good support for the ear cups. The fit and finish is good and we didn't feel any creaks in the plastics during use.

The QC35 II is extremely comfortable to wear. We used it for a couple of weeks, even through long commutes of over an hour, and we didn't feel any sort of fatigue. The ear cups have a decent amount of clamping force and cover your entire ear when you wear them. They swivel outwards so that they can lie flat against your upper body when placed around your neck (although this is still a large pair of headphones). The ear cups are made up of a plush synthetic leather and feel extremely comfortable on your ears. The same goes for the cushioning on the inside of the headband. 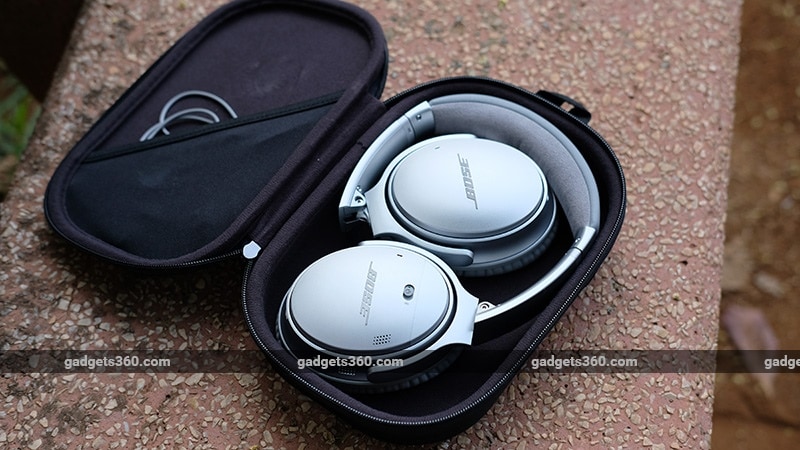 Button placement is the same as on the QC35, except for a new Action button on the left ear cup which is used to activate Google Assistant or to cycle through the different levels of noise cancellation, depending on what you choose in the Bose Connect app, which is available for both Android and iOS. The headphones charge through a Micro-USB port on the right ear cup while the left one has a 2.5mm audio input for a wired connection. The box contains a 2.5mm to 3.5mm stereo cable, but ideally, we would have preferred a standard 3.5mm socket on the headphones. The bundle also includes a hard carry case and a Micro-USB charging cable, but there's no airline adapter like the one that came with the original model.

The QC35 II can remember up to eight paired devices and can be connected to two of them at the same time. There's support for the AAC audio streaming codec too. The Bose Connect app lets you give your headhones a quirky name, manage the pairing list, automatically update their firmware, and set a sleep timer. The Music Share feature lets you share the audio with another person who has compatible Bose headphones.

Pairing is quick if you have an NFC-capable smartphone, but the old-fashioned way works too. We tested the QC35 II with an Apple iPhone 6s Plus and a Google Pixel 2 XL (Review). If you're using iOS, you'll need the Google Assitant app installed and set up with a Google account. When the headphones are connected to your iPhone, Assistant will detect that you have a compatible headset and will walk you through a quick setup process.

Siri can still be triggered by holding down the Play/Pause button. As notifications come in, you'll hear prompts from Assistant about which app has sent them. You can have notifications read out with a quick press of the same button. However, you can't skip to the next notification so you'll have to listen to all of them in sequence. Holding down the action button temporarily stops noise cancellation and lets you speak to Assistant in order to perform any action, such as setting an alarm. 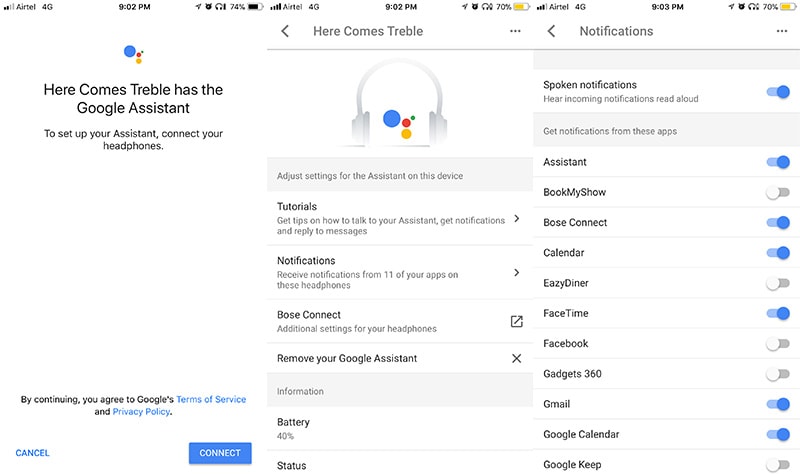 We found that we needed to have an active Internet connection in order for Assistant to even read out notifications in iOS, which isn't the case with Android. If you don't use Assistant on iOS for a while, you'll have to re-lauch the app for it to detect the headphones again. We also found it to be a little buggy as at times, for example it would simply refuse to detect the headphones (despite multiple restarts).

One would assume that the Android experience would be smoother, but that was't really the case. We were able to reply to messages (SMS and WhatsApp) using Assistant, which is something we couldn't do on iOS. However, the QC35 II doesn't play well with Android Oreo just yet. It worked on the Pixel 2 XL, but refused to detect the headphones when using an HTC U11+ (Review). This seems to be a known issue with Android Oreo devices and Google says it is working on a fix. Also, when you have the QC35 II connected to two phones, it will use Assistant on the phone that was connected last even though you might have music streaming from the first one. When connected to a laptop and a phone, it conveniently pauses music playing from the laptop, so you can answer the call through the headphones.

Just like with the original Bose QC35, audio quality is very good. In Shone by Flo Rida, the QC 35 II delivered deep bass and there was a good amount of sub-bass too. Soundstaging was wide, with good dynamics across the frequency range. Highs were handled well and didn't get too piercing at high volumes. The mid-range was clear and distinct, which was also evident in tracks such as Billie Jean by Michael Jackson. At very high volumes, we did notice a bit of sound leakage, but this was in a room with very little ambient noise. The microphone is sensitive enough to pick up the wearer's voice during calls, and both parties had no trouble with voice clarity. The QC35 II can also be used as a wired pair of headphones with noise cancellation, and will continue to work without it when the battery is drained.

As good as these headphones are, we wish that this refreshed model had a few more utilitarian features in line with what competitors now offer. For instance, there's no way to temporarily disable noise cancellation if you want to hear what's being said around you without taking the headphones off. There's also no ‘transparency' mode, which typically channels ambient sound into the headphones, which is useful when you're using them in public places. We didn't like the fact that you lose the ability to control noise cancellation if you map the Action button as a trigger for Google Assistant. Why not just have a button for each function? 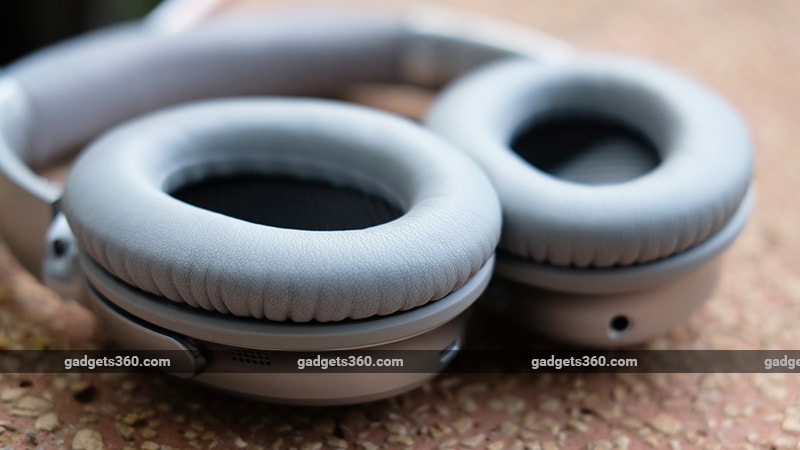 We managed to get 19 hours and 31 minutes of usage on a single charge, with the noise cancellation level set to High. This comes close to Bose's claim of 20 hours, and we're not complaining. It takes about two hours to fully charge the QC35 II from zero, and you get a voice prompt when the battery level dips below 20 percent.

Verdict
The Bose QC35 II carries forward the same level of audio and noise cancellation performance of the original, which makes it a solid pair worth considering. We found the addition of Google Assistant to be quite useful, at least when it worked. If you use it a lot, this integration will come in handy. We did face some moments where the experience got a little buggy, but hopefully all these things can be fixed with firmware updates.

If you don't care about Google Assistant, the original QC35 is still available online for a bit less money, which makes it relatively good value.