The popular Audio-Technica ATH-M50x gets a wireless version

Anyone who is familiar with headphones and audiophile-grade personal audio knows of the iconic status of the Audio-Technica ATH-M50 and M50x. These headphones are marketed as studio-focused professional monitor headphones, but have a cult following even among regular consumers for their open, clean sound and neutral sonic signature. However, the product is wired and in 2019, it feels rather dated.

Bluetooth technology today is significantly better than it was a few years ago, with improved connection stability and sound quality. This has led to calls for a wireless version of these headphones, and Audio-Technica has duly delivered. The company recently launched the Audio-Technica ATH-M50xBT wireless headphones in India, and we've now had a chance to review this pair. Can it live up to the reputation set by its wired predecessors? Find out in our review. 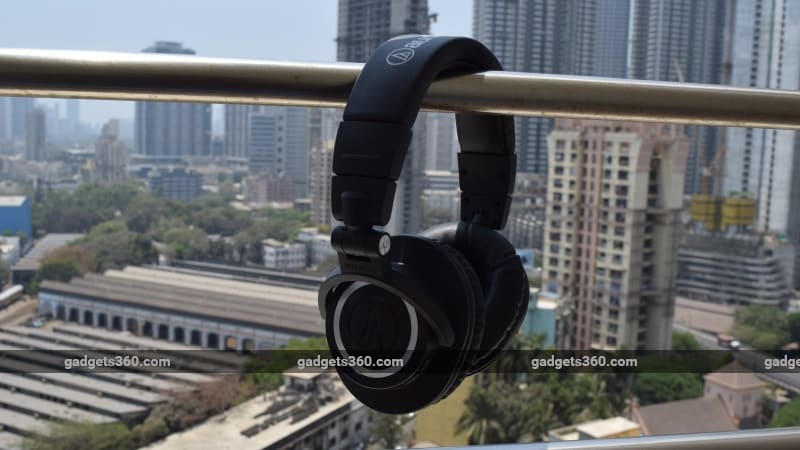 The Audio-Technica ATH-M50x might have looked spiffy back when it was first launched in 2014, but the design is now starting to look a bit dated. The M50xBT sticks to this design, with only small changes on the left side to integrate new controls and a Micro-USB port alongside the 3.5mm socket for wired connectivity.

We feel the buttons are positioned a bit awkwardly as we often pressed the wrong one when trying to adjust the volume or pause music. Additionally, there should have been a USB Type-C port for charging, rather than the older Micro-USB standard.

The rest of the Audio-Technica ATH-M50xBT looks almost the same as the wired version. This means it might look boring to some but it also helps it retain the headphones' classic character; this is the same iconic headset at its core, with improvements only made for technological relevance. The ATH-M50xBT is also as well-built as its predecessor.

For anyone unfamiliar with the wired version, the Audio-Technica ATH-M50xBT has thick padding on the headband and ear cups, and large company logos surrounded by a silver ring on the outside of each ear cup. The ear cups entirely covered our ears for the same comfortable fit as that of the wired ATH-M50x headphones.

In terms of specifications, for the most part, the Audio-Technica ATH-M50xBT is exactly the same as the wired ATH-M50x, and provides the same listening experience when used as a wired headset. The headphones have 45mm dynamic drivers, a frequency response range of 15-28,000Hz, and an impedance rating of 38Ohms when used as a wired headset - figures that are identical to those of the standard wired version.

The wireless functionality uses Bluetooth 5, with support for the aptX, AAC, and SBC Bluetooth codecs. We were able to run the ATH-M50xBT for close to 35 hours on a single charge, which is top-notch by current standards. 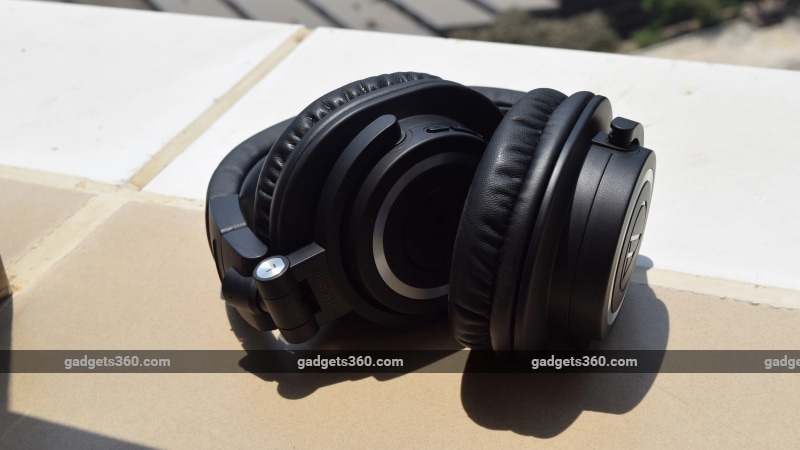 Just as it is with design and specifications, the Audio-Technica ATH-M50xBT has the same sonic signature and almost the same level of performance that has made its wired predecessor so popular. The sound produced by this pair of headphones has an open, airy feel, and a neutral sonic signature. We tested the Audio-Technica ATH-M50xBT with a OnePlus 6T (Review) and MacBook Air, and also compared wireless performance against wired performance using the included audio cable.

Using Bluetooth, the Audio-Technica ATH-M50xBT sounded the best when paired with the OnePlus 6T, which was able to use the aptX Bluetooth codec for audio transmission. We experienced the same openness in the sound that we loved on the ATH-M50x, complete with the ability to hear gentle elements in a track.

Listening to the haunting Panoramic by Hyenah and Pablo Fierro was nothing short of incredible, as we could hear the soft natural sounds delicately engineered into the background of the track. The sounds of birds chirping and the tribal chants and beats integrated into the track were soft, yet clear and easy to sense. There was also a strong sense of depth and direction to these gentler sounds, and they did feel as though they were coming from a distance.

The ATH-M50xBT promises the same studio-quality sound as the wired version, and we were not disappointed; these earphones are revealing, open, and entirely deserving of their ‘monitor' branding.

Despite us getting hung up on the revealing nature of the Audio-Technica ATH-M50xBT, it still managed to keep the core of the track — its punchy and tribal-inspired beats — in the foreground. The neutral nature of the sound brings out every element of the track with equal aplomb, without sacrificing elements that need the most attention front-and-centre. Even when listening to the equally punchy Everlasting Days by Nu:Logic, bass was tight and calculated throughout the track, while vocals and highs were as clear and sharp as they needed to be. 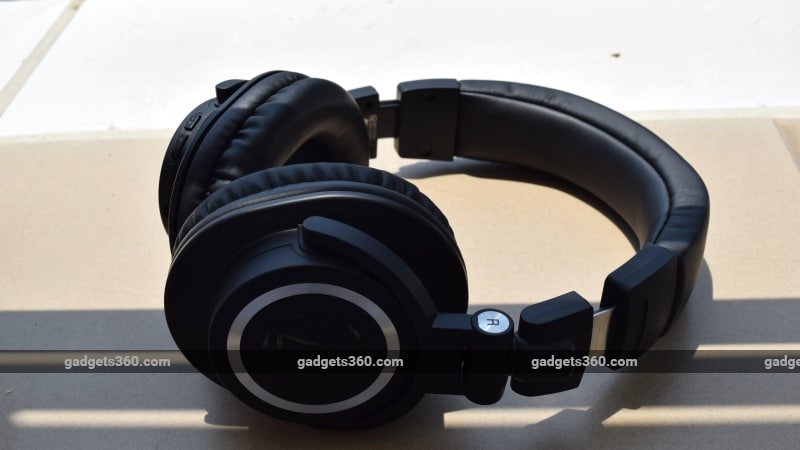 Perhaps the most noteworthy characteristic of the Audio-Technica ATH-M50xBT's sound for us was that we didn't experience any listener fatigue in the long-run, which can't be said about many neutral, monitor-grade headphones. The openness in the sound is particularly enjoyable on gentler tracks such as Let's Elope by Koop, where the busy beats, omni-directional tuning by the artist, and soothing jazzy melody were never let down. The level of openness on the earphones is comparable to what you get with open-back earphones, which is saying something given that the ATH-M50xBT is a closed-back headset.

Most wireless headphones are tuned for optimal performance over Bluetooth, which means they do their own internal digital-to-analogue conversion and amplification. Some wireless headphones do offer the option to connect an audio cable and listen wired, but this tends to be treated as a backup option for when their batteries die, and they don't sound very good this way. The same can't be said of the Audio-Technica ATH-M50xBT; these headphones sound practically as good with a wire as without one.

When listening to compressed or streamed audio tracks, it was hard to tell the difference between wireless and wired listening. However, switching to high-resolution FLAC and DSD tracks brought out the differences. When using the cable connected to our MacBook Air, a FLAC version of Michael Jackson's You Rock My World naturally sounded better. However, it was only slightly less enjoyable when played on the OnePlus 6T with aptX streaming. The response was a bit tighter and the sound felt a bit more open, but on the whole, Bluetooth connectivity didn't take much away from the sound quality.

We also had a standard Audio-Technica ATH-M50x unit on hand to compare with the ATH-M50xBT. The two pairs of headphones certainly didn't sound the same even after we'd given the ATH-M50xBT enough burn-in time; the older pair sounded a bit more open (likely due to hundreds of hours of use), while the newer pair had slightly tighter response.

The ATH-M50xBT also has a microphone — placed below the power switch and only revealing itself when the headset is turned on — which worked well for hands-free calls in our experience. The included audio cable also has an inline microphone and a single-button remote, letting you use it this headset a hands-free device even when you aren't using Bluetooth for connectivity. 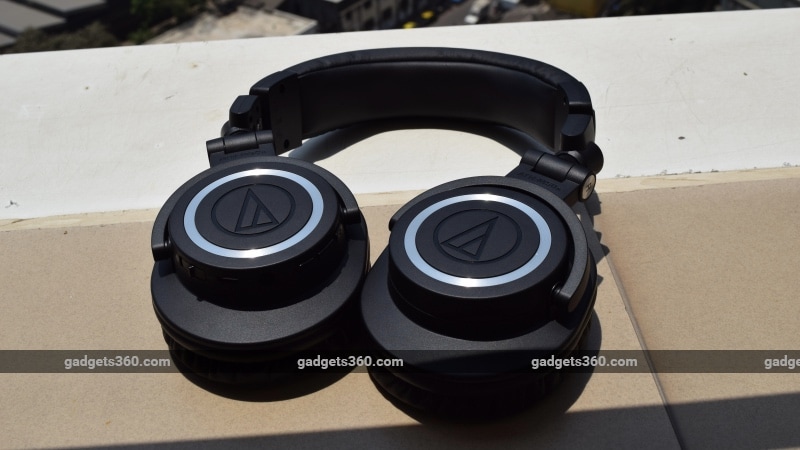 Verdict
The Audio-Technica ATH-M50xBT is a modern approach to a classic product, and an excellent one given the shift in consumer preference towards wireless listening. While audiophiles and traditionalists will always swear by wired headphones, the ATH-M50xBT offers the flexibility of wireless use while retaining the neutral sonic signature, openness, and detail of the wired ATH-M50x.

Priced at Rs. 18,450, the ATH-M50xBT costs nearly twice as much as the standard wired ATH-M50x. Considering that this premium only buys you wireless connectivity, it's worth considering alternative products such as the Fiio BTR1K, which can give you the same features at a significantly lower price. However, if you're looking at an uncomplicated way to enjoy excellent sound with superb battery life, the Audio-Technica ATH-M50xBT is among the best-sounding wireless headphones on offer today.

Further reading: Audio Technica, Audio Technica ATH-M50xBT, Bluetooth, aptX
Ali Pardiwala Email Ali
Ali Pardiwala writes about audio and video devices for Gadgets 360 out of Mumbai, and has covered the industry for a decade now. Ali is a Senior Reviewer for Gadgets 360, where he has regularly written about televisions, home entertainment, and mobile gaming as well. He is a firm believer in 4K and HDR on televisions, and believes that true wireless earphones are the future of the personal audio industry. Ali is available on Twitter as @AliusPardius and on email at alip@ndtv.com, so do send in ...More
Apple 'Material Recovery Lab' Uses Robots to Rip Apart Devices for Recycling Materials
Asus ZenFone Live L2 With 3,000mAh Battery, 5-Megapixel Selfie Camera Launched: Specifications