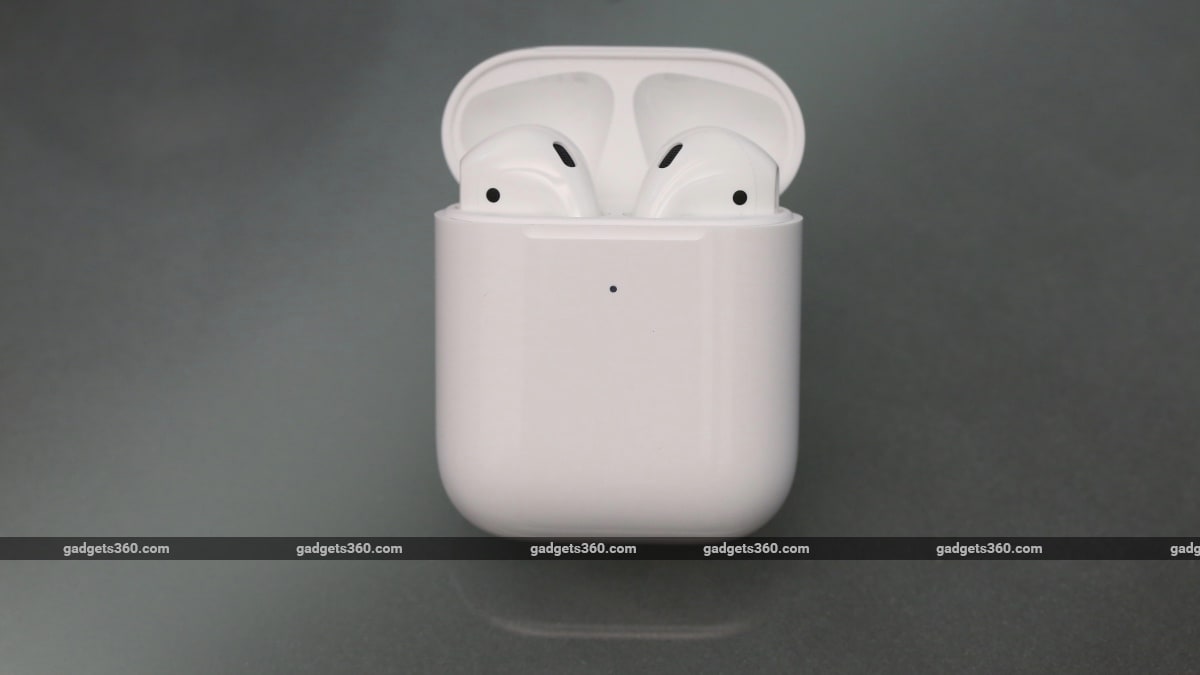 The new AirPods are visually identical to the first-generation model

There's no denying the popularity of the Apple AirPods, or their impact on the truly wireless earphones segment. This now-ubiquitous fit style was popularised by the original Apple AirPods, which were launched in late 2016, and they are a useful accessory for anyone who owns an Apple iPhone.

Last month, Apple announced the launch of the new second-generation Apple AirPods. While largely similar to the first-generation variant in many ways, the new Rs. 14,900 AirPods do have a few subtle differences in terms of hardware and features. We had a chance to test the new truly wireless earphones from Apple, and we received the variant with the new wireless charging case for review, which is priced at Rs. 18,900. Here's our review of the new Apple AirPods.

There isn't much to distinguish the old Apple AirPods from the new ones. The earbuds look identical on both generations, but the wireless charging case (which can also be used with older AirPods) has some differences.

The charging indicator is now on the outside, while the pairing button at the back is placed slightly higher. The exposed metal hinge at the back now has a matte finish instead of a chrome coating, and this might be a pedantic observation, but it makes a slightly different ‘snap' sound when you close the lid. The non-wireless case that comes with the lower priced second-gen AirPods looks the same as that of the original set.

That said, the fit could still be an issue with these earphones. Apple's one-size-fits-all design may be suited to most ears, but there will always be people who they don't fit well, and they might tend to pop out even with the gentlest of head movements. If you didn't have an issue with the fit of the first model, these new AirPods will feel very familiar.

We didn't have trouble with the second-gen AirPods staying in our ears, and also found them to be comfortable for long listening sessions. The positioning of the microphones is also the same as on the previous-generation AirPods.

Apart from the wireless charging case, another big difference is Apple's use of its new H1 audio chip. This is an upgrade over the previous W1 chip, promising better connectivity and battery life. Indeed, connectivity was quick and seamless with an iPhone XS (Review), right from pairing to continuous use. This included the automatic pause and resume functionality when removing the AirPods from our ears and putting them back, as well as quickly connecting to the AirPods when opening the case.

Another new feature in the second-generation AirPods is the ability to invoke Siri hands-free; you can now say the ‘Hey Siri' command out loud and Apple's voice assistant will respond directly through the AirPods. This feature works as expected, and you can always disable it or use the double-tap gesture on either or both earbuds (configurable from Settings) to invoke Siri.

As before, the second-generation AirPods can be used with an Android smartphone as a standard pair of wireless earphones. The interface, connection stability, and speed of connecting to the earphones were not as refined as when using the AirPods with an iOS device. The pairing process is the same as with most Bluetooth wireless headphones, and sound quality depends on what codecs your smartphone supports.

Battery life with the second-generation AirPods is largely the same as with the first-generation version. We were able to get around five hours of listening from the earphones on a single charge, while the charging case is able to hold a little over five full charges for both the AirPods.

That works out to a total of around 30 hours of use before you need to recharge the case. Note that if you use the AirPods for a lot of calls, the battery runs out faster. The new AirPods are rated to offer three hours of talk time, which is 50 percent more than their predecessors.

If you have the standard charging case, you can plug it into your iPhone charger, or use the included Lightning cable with any USB charger or computer. If you have the wireless charging case, you can use any Qi-compatible wireless charger to top up the battery of the case, simply by placing it onto the charging pad on its back. The LED on the case lights up orange when it begins to charge, but turns off after a few seconds, even though the case continues to charge.

With the AirPods removed, we began charging just the case (which was at 21 percent) using a 10W wireless charger, and in 30 minutes, the battery level was up to 40 percent. It's clearly not very quick, but this way, you can charge your AirPods on the go if someone around you has a phone with reverse wireless charging, such as the Samsung Galaxy S10+ (Review).

If you have one of the newer iPhones that support wireless charging and you also pick up the second-generation AirPods (or the wireless charging case for the first-gen AirPods, which is sold separately for Rs. 7,500), a good wireless charger might be a worthwhile investment.

Apple claims that the new AirPods let you switch between Apple source devices twice as quickly as before, and while it's hard to measure this claim objectively, the process is noticeably quicker. We tried switching between different iPhones and between an iPhone and a MacBook Air, and there was very little wait time involved, compared to the previous model. As convenient as this is, we would still have preferred true simultaneous multi-device connectivity, which would have been useful with non-Apple devices as well.

If you've been using the first-generation AirPods for a while, the improvement in connection time will be apparent. Just like with the first model, the moment the AirPods are paired with one Apple device, they automatically become available to any other device using the same Apple ID.

Other little conveniences that made the first-generation AirPods so popular still work just the same. When connected to an Apple device, removing either of the AirPods from your ear will pause your music or video. Putting it back in will resume playback from that point.

The changes to the second-generation Apple AirPods don't seem to go beyond the new H1 chip, always-listening 'Hey Siri', and optional wireless charging case. Audio performance for the new AirPods is the similar to the older model. The drivers and core audio technology in the AirPods remains the same.

We were able to verify this by doing a simple test that involved the left earphone of the new AirPods with the right earphone of the old AirPods, each connected to a different iPhone but playing the same track started at the same time. There was no difference in sound quality between the two, and our experience was the same as when listening with either of the sets.

Sound quality on the new AirPods was best when using an iOS device, since this lets them take advantage of the AAC codec. The sound is clean and sharp, with a sonic signature that suits most genres and works with what most consumers look for in earphones. We found the bass less punchy than on the Samsung Galaxy Buds, but it could be felt in suitable measure, with lows sounding clear and present. The mid-range response is detailed, while the highs are strong and enjoyable as well.

We also quite liked the instrument separation and width of the sound stage, which brings out the best in the AirPods when it comes to detail. We were able to hear an excellent level of detail in the softer instruments when listening to Someday We'll All Be Free by Donny Hathaway, even in our noisy office. The soft beat of the track, as well as the soothing trumpet section in the middle were clear and defined, while offering the impression of width in the soundstage.

The AirPods are loud as well, which can be useful given that they don't have very good noise isolation. At the highest volumes, the sound is extremely loud but does lose out on detail and sharpness; listening at moderate volumes ensures good sound that is loud enough to be heard over any ambient sound that will reach your ears.

While audio quality is best with iOS, the AirPods sounded nearly as good with a OnePlus 6T (Review) that was compatible with the AAC Bluetooth codec. Although frequency responses were largely similar, we did notice a bit less openness and detail. Connection time was significantly more than on iOS, but connection stability was good and we were able to listen without any problems. The AirPods also work with the more widely available SBC Bluetooth codec, but the sound loses some of its edge and sharpness.

The biggest drawback of the Apple AirPods is their poor sound isolation, which can be blamed on the design of the earphones. Although the loudness and positioning of the drivers and grilles did somewhat compensate for the lack of isolation, a lot of background sound could still be heard. Many people do prefer being able to hear some ambient sound, especially when using earphones outdoors, but purists will have a problem with the sound isolation on the AirPods.

The AirPods also work great for voice calls. You can use either or both of the earbuds to answer calls. Apple claims that the new generation offers longer talk-time and faster connection times on voice calls. These differences weren't immediately noticeable to us, but one can hope this means the new AirPods will offer a better experience in the long term. The new H1 chip also promises up to 30 percent lower audio latency when playing games. We never experienced any issues with audio lag in gaming even on the earlier model, and the same holds true for the second generation too.

If you're planning on using the AirPods primarily for listening to music, the first-generation model is still a viable choice and it sells for roughly Rs. 2,500 less online. You get more or less the same battery life, and audio quality is identical to that of the newer model. However, if you use Siri a lot during your commute or take a lot of calls, spending the extra money for the second-generation AirPods might be worth it.

The top-end option with the wireless charging case is too expensive, in our opinion. We can see the appeal of having this feature because it could be handy when you don't have a cable around and with wireless chargers becoming more common. However, a Rs. 4,000 premium for this is a bit too much.

If you're an existing AirPods user and you're still getting decent battery life from the earbuds, then there's absolutely no reason to upgrade. However, if you picked up your AirPods around the time they were first launched in 2016 or even early 2017, then there is a good chance that your battery life has dropped significantly, in which case, it might makes sense to pony up the extra cash and get the new model.