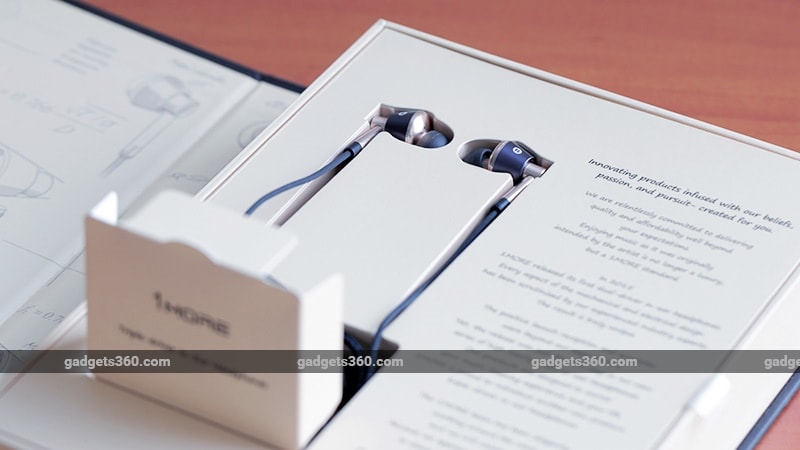 1More has established itself as a serious contender in the audio space over the years. Its product portfolio isn't very vast, but the few products we've tested have turned out to be really good. Today, we'll be testing 1More's highly acclaimed Triple Driver In-Ear, which is currently one of its most expensive offerings in India. This pair of headphones boasts of having three different drivers inside each earbud for higher fidelity audio.

The price tag of Rs. 8,999 puts it in the premium segment as far as wired headphones go. It's time to put the Triple Drive In-Ear to the test to see if the hype if real.

The headphones look great and are snugly packed in a rather large box. The cable is sufficiently long (1.25m), and according to 1More, is made of an enamelled copper wire with kevlar fibre for increased durability and strength. The soft rubber lining of the cord is exposed from the Y-splitter to the earbuds, while the lower portion has nylon braiding.

The casings of the earbuds are made of metal and sit at slight angles when you wear them so they rest more comfortably in your ears. More than comfort though, 1More says this angle was chosen to increase sound isolation and improve quality. Inside each casing, there are two balanced armature drivers and one dynamic driver. The latter is said to use aerospace-grade material in its construction. Despite squeezing in three drivers, the Triple Driver In-Ear's casings are surprisingly compact and relatively inconspicuous when you wear them. We didn't find them too heavy either. There is an in-line remote control, which houses the microphone for calls and three buttons for controlling music playback.

The 1More Triple Driver In-Ear boasts of an impressive frequency range of 20Hz to 40,000Hz, and an impedance rating of 32Ohms, which is decently low considering the number of drivers inside. 1More's website claims that the Triple Driver In Ear is the world's first pair of THX certified headphones. The headphones are available in black and titanium (which we have with us).

Coming to the packaging itself, it's pretty fancy and you get a couple of premium-looking accessories inside. On the flap of the box, we have some sketches of the process that went into designing the headphones, along with a message from Luca Bignardi, a Grammy-award-winning sound engineer who supposedly helped tune them. Flipping over the layer which has the headphones themselves, we have all the accessories which are boxed individually. The carrying case is a hard-shell box with a magnetic flap and a leather-like texture.

Next up, we have a dual-prong airplane adapter for using your headphones with in-flight entertainment systems. The same box also has a metal shirt clip for the cable. There's a separate box just for the manual and a mini 1More product catalogue. Finally, the tallest box in the package houses the eight extra pairs of eartips that come in addition to the ones already on the earbuds. There are six sets of silicone tips in different sizes, and three sets of foam tips. All the accessories are high quality and feel premium.

We tested the 1More Triple Driver headphones on a range of devices including the LG V30+ (Review), Apple iPhone 6s Plus (Review), and a MacBook Air. We used an assortment of media ranging from online streaming to high-resolution FLAC files. We put the headphones through a short burn-in period too using 1More's own Assistant app. Focus tracks for this review were In The Closet by Michael Jackson, Coming Back To Life by Pink Floyd, and Reminder by The Weeknd.

In The Closet is quite a complex track with a lot going on in the mid-range, along with heavy bass notes. With the FLAC version of this track, the Triple Driver In-Ear managed to deliver very good separation between the multiple instruments and the sound effects that are sprinkled intermittently throughout the song. Bass response was punchy and to the point. We were easily able to hear minute nuances, which would otherwise have been lost.

In Coming Back To Life, the electric guitar riff at the beginning sounded sharp and bold. Vocals were once again crisp and were placed front and centre among all the instruments. High frequencies were handled with precision thanks to the balanced armature drivers doing most of the heavy lifting, while the dynamic driver provided a subtle amount of bass throughout the track.

We chose Reminder mainly for its heavy bass, which sounded punchy and tight. There was good control here and we never found the bass overpowering the other notes or vocals at any point in the song, even with the volume turned all the way up.

Listening to the same tracks in FLAC using all our different test devices showed that the quality of the source really matters with the 1More Triple Driver In-Ear headphones. The quad DAC feature of the LG V30+ didn't seem to make a significant difference to the audio quality, compared to listening to the same songs on a more budget-friendly smartphone such as the Samsung Galaxy On7 Prime. We did notice a small difference in the mid range, and the bass was a bit more controlled, for the most part, it was hard to distinguish them. Music streamed from the Internet sounded good too, but you won't be doing the headphones justice unless you're streaming high-resolution files.

The silicone ear tips offer a good fit but we found the foam ones to be more comfortable, and they even offer better isolation against ambient noise. However, there is audio leakage at high volumes, and so whatever you're listening to will be audible to those around you. On the comfort scale, we didn't have any issues with fatigue even after listening to music for over an hour.

Voice calls were handled well, and the buttons on the in-line remote have good tactile feedback. The headphones also do a good job with other forms of media such as movies, which sounded balanced and engaging in our experience.

Verdict
The Triple Driver In-Ear from 1More manages to live up to the hype surrounding it. This pair of headphones produces balanced and detailed sound. It's good with pretty much any genre of music thanks to the two balanced armature drivers tackling the high and mid-range frequencies, while the bass is left to the dynamic driver. Its market price of Rs. 8,999 is a bit on the high side when compared to the typical price in other countries, but isn't too bad in terms of value. This pair of headphones is easy to drive with any decent portable device thanks to the relatively low impedance rating. Build quality is also very good, and you get a lot of accessories in the box.

If you do spring for the 1More Triple Driver In-Ear, then rest assured, you won't be disappointed. Just make sure you have some high-resolution audio sources to get the most out of it.