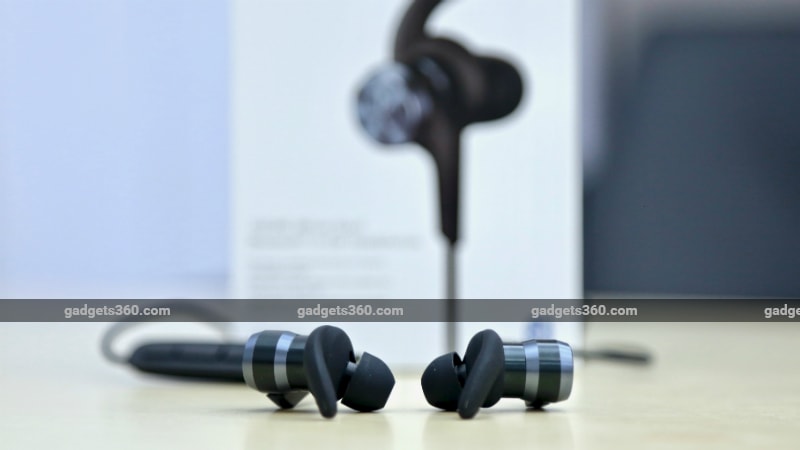 1More, a company well known amongst audiophiles for its stellar triple-driver and quad-driver earphones, released its first pair of wireless earphones last year in the form of the iBFree. Now, the company has added the Sports suffix to the same pair of earphones. The company says that it has bumped up the water resistance rating, upgraded the Bluetooth version from 4.1 to 4.2, and improved sound quality.

With IPX6 water resistance, a lightweight design, and ergonomically shaped earpieces, the 1More iBFree Sport is geared towards people with an active lifestyle. Are these wireless earphones worth a buy? Let's find out.

The 1More iBFree Sport has a neckband style design and can withstand jets of water, dunks in a pool, or even heavy rain. The earphones are made predominantly of plastic and are fairly light and comfortable to wear for hours at a time. The aluminium end caps on each earpiece make the design distinct.

The fit is very secure and the earphones did not slip out while we were running or jogging, thanks to small silicone hooks that fit into the contours of the wearer's ears. The box includes three pairs of silicone tips and ear hooks, so finding a tight and comfortable seal should not be a problem for most users.

The earpieces are ergonomically shaped but jut out a fair bit from the wearer's ears, which made using the iBFree Sport whilst lying on our side quite uncomfortable. There's a module for the controls and battery in line with the right earpiece which has a Micro-USB port and three plastic buttons: two to change the volume and skip tracks, and one for controlling playback. These are hard to press and do not feel very responsive. Above them is a circular power button made out of metal that is of much higher quality.

The module swings about while running or doing any intensive activity and is sure to irritate some users. That said, we have seen much heavier modules on other wireless earphones, and casual day-to-day use is not impacted.

1More has updated the earphones to Bluetooth 4.2, and they also support the AAC Bluetooth streaming codec. Most of our test tracks were a mix of high-resolution 16-bit/ 44KHz and 24-bit/ 96KHz FLAC files, as well as audio streamed from Google Play Music at 320kpbs.

1More has vastly improved the bass compared to the old iBFree, which was criticized for lacking punch in the lower end. The bass is tight and controlled, and does not overpower the other frequencies. Like most earphones tuned for casual listening, the mids are suppressed, resulting in a fun V-shaped sound signature.

The high end is where things go downhill. The tuning is off balance, and highs sound harsh and sibilant in even moderately treble-heavy tracks such as Oh Love by Green Day. This is an issue that plagues the standard iBFree as well. On a more positive note, the soundstage is pretty decent for the price and image spacing is excellent.

With the iBFree Sport, 1More has developed its own Bluetooth chip and has moved the antenna from the earbuds to the control module. The company claims these changes improve connectivity. Sure enough, connectivity was rock solid during our test period. We also experienced no issues while on calls.

Whenever you turn on the earphones, a robotic female voice calls out the battery level (high, medium or low), which is quite useful. Battery life is pretty solid. 1More promises eight hours on a single charge and we were able to achieve that with music playing at 70-80 percent volume. A full charge takes around an hour and a half, but a 15-minute charge powers the earphones for around 60 minutes. The included Micro-USB cable is very short, which some might find inconvenient.

Verdict
The MRP of Rs. 3,999 is a bit steep but the 1More iBFree Sport can be found online for less than Rs. 3,000. That is a good price, considering that this pair of wireless earphones is comfortable, built well, and IPX6 certified. The punchy bass, above-average soundstage, stable and secure fit, and solid battery life are its main advantages.

The harsh treble can be difficult to live with though, and the buttons are hard to press. Audiophiles will also find the mids a tad too repressed. Those who do not care about the sport-related design can take a look at the Sony WI-C300, which has a more accurate sound signature and retails for Rs. 2,999. Another option worth considering is the OnePlus Bullets Wireless, which has a detailed mid-range but is not IP-certified, and costs a thousand rupees more.