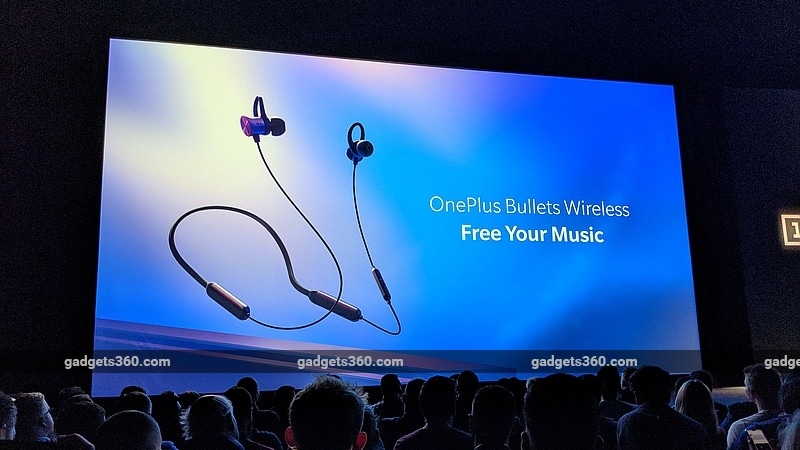 OnePlus Bullets Wireless earphones were launched by the company on Wednesday, alongside the OnePlus 6 flagship. The wireless earphones are the company's take on the new trend in the market, best popularised by the Apple AirPods. Unlike Apple's offerings however, the Bullets Wireless feature a wire that holds together the left and right earbuds, in the style of a neck band. One of the highlights of the earphones is the use of Dash Charge fast charging technology, said to provide 5 hours of playback time from just 10 minutes of charging. Overall, they provide 8 hours of battery backup.

The OnePlus Bullets Wireless earphones use Bluetooth v4.1 connectivity and support Qualcom aptX technology that's touted to provide high-quality audio across a Bluetooth connection. They feature 9.2mm drivers, and the company's Energy Tube technology to stabilise sound as it passes through. The Energy Tubes are composed of a non-metallic mineral and silica gel, and reduce frequency distraction and noise generation.

The Bullets Wireless also feature magnetic switches. Amongst other features, these allow users to stop playback by putting the two earbuds together - these then magnetically attach, stopping playback. Users can resume playback and take calls simply by pulling the attached earbuds apart. They also feature an in-line remote control. The neck band features a button for power and pairing, as well as the input for Dash Charge.

As we mentioned, the OnePlus Bullets Wireless are said to offer 8 hours of battery life, and provide up to 5 hours of playback time with just 10 minutes of charge, thanks to Dash Charge technology. The company says it has integrated the Dash Charge tech into the Bullets Wireless, thus any compatible USB Type-C adapter can be used to fast charge the earphones. The earphones also have Google Assistant support for voice assistance.

The OnePlus Bullets Wireless earphones feature memory alloy earbuds with liquid silicon. The company will provide interchangeable tips and fins, for users to find the right fit for their ears. The earphones are also weather-resistant, the company says.