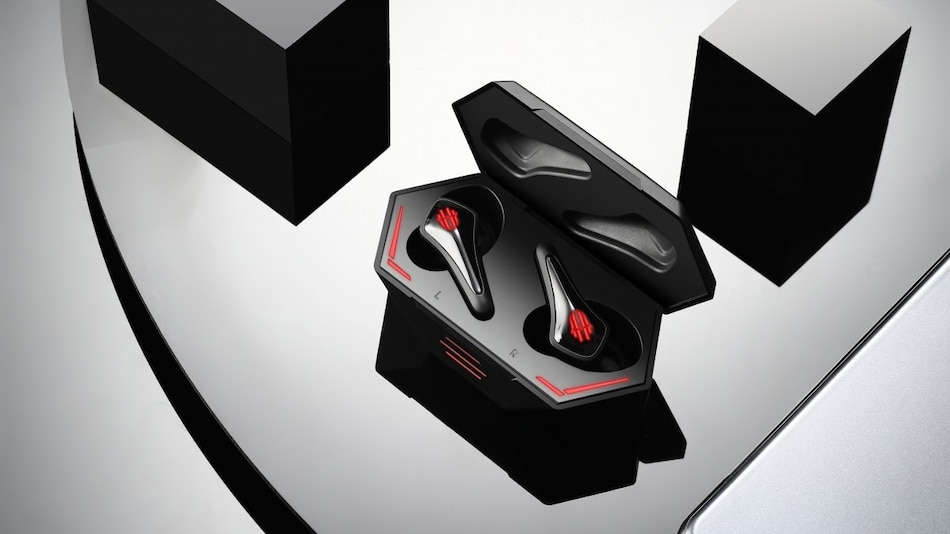 The Red Magic Cyberpods have touch control features on the buds

Red Magic Cyberpods TWS gaming earbuds with Bluetooth 5.0 connectivity and a low-latency mode have been launched in Europe. Nubia had announced the Red Magic TWS gaming earphones back in July and will now roll it out globally. The Red Magic Cyberpods will be available for purchase in Europe from November 20, as per a report, and will have a global rollout at a later date. Besides that, the Red Magic 5S gaming smartphone has also reportedly now been released in a new Eclipse Black colour variant.

Nubia introduced the Red Magic Cyberpods True Wireless Gaming Earbuds through a video on YouTube, but the earbuds haven't gone live on the company's website so far. The Red Magic Cyperpods were announced in July by Nubia and are primarily made for smartphone gaming.

The Red Magic Cyberpods are priced at EUR 50 (roughly Rs. 4,400) in Europe, as per a report. They will be available for purchase November 20 onwards through Nubia's website. The earbuds are expected to be available globally soon as well, but there is no timeline available for the same.

The earbuds come with 8mm drivers on each earpiece, as per the report. They have Bluetooth 5.0 connectivity and a special low-latency mode for gaming. The Red Magic Cyberpods have touch control features on the buds and a one-touch connect feature with Nubia phones. Citing the company, the report says that the Red Magic Cyberpods have a 20-hour battery life combined with its charging case that charges with USB-C. The earbuds have RGB lighting as well.

Red Magic 5S which was launched in July of this year, is now available in a new Eclipse Black colour variant. It is black and has silver and red accents around it. The new edition of the gaming smartphone is available in a single 8GB + 128GB storage configuration and is priced at EUR 579 (roughly Rs. 51,100).

The new colour variant of the Nubia smartphone may not be available in international markets and may remain exclusive to European markets.