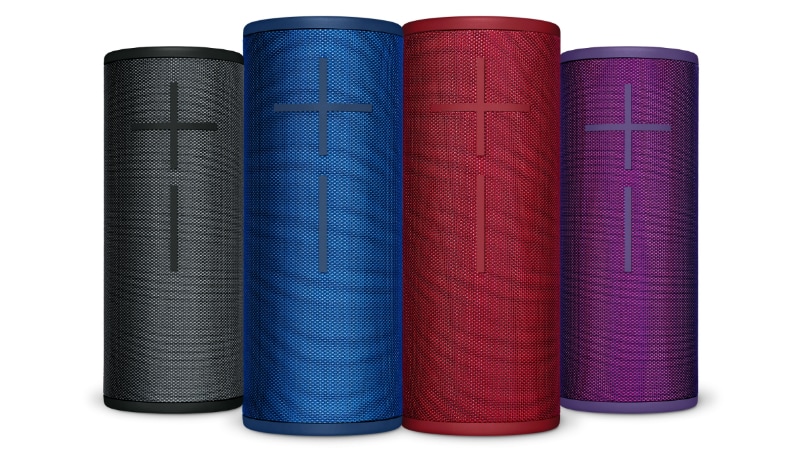 These are the successors to the UE Boom 2 and UE Megaboom, respectively.

Logitech audio brand Ultimate Ears on Thursday announced the launch of the latest UE Boom 3 and UE Megaboom 3 Bluetooth speakers, successors to the popular UE Boom 2 and UE Megaboom respectively. As a departure from the previous design, both these variants ditch the rubber stripe in favour of a streamlined all-fabric approach. The trademark large volume control buttons are still there, albeit even larger than the previous generation. With this generation the UE Boom and UE Megaboom series finally get a dedicated button for play/ pause/ skip placed on top of these portable Bluetooth speakers.

Ultimate Ears is that button on top as the Magic Button. By default, it can be used for play, pause, and skip functionality. The UE Boom 3 and UE Megaboom 3 also have IP67 water and dust resistance rating. Additionally, the company claims an improved Bluetooth range of up to 150 feet helping enhance portability and use across the house. Both of them have a repositioned Micro-USB port allowing users to charge the speakers upright. This is a welcome move considering the previous bottom positioning was frustrating in terms of user experience.

The two speakers are also compatible with the Ultimate Ears Power Up charging dock that will allow users to wirelessly charge the latest UE Boom 3 and UE Megaboom 3. This charging dock will be sold separately at a price of $39.99 (roughly Rs. 2,800), however pricing will vary depending on country. Pricing and availability details for the Indian market are not out yet.

"With Boom 3 and Megaboom 3, we took the ultimate speaker and made it even better," said Charlotte Johs, General Manager, Ultimate Ears. "Beyond immersive 360-degree sound that is balanced to stay true to your music, we improved the durability of the speakers without compromising on style. We also introduced the Magic Button, getting you to your music faster with just one touch, taking the speaker up a notch."