HyperX Streamer Starter Pack is priced at Rs. 11,490 and is exclusively available on Amazon. 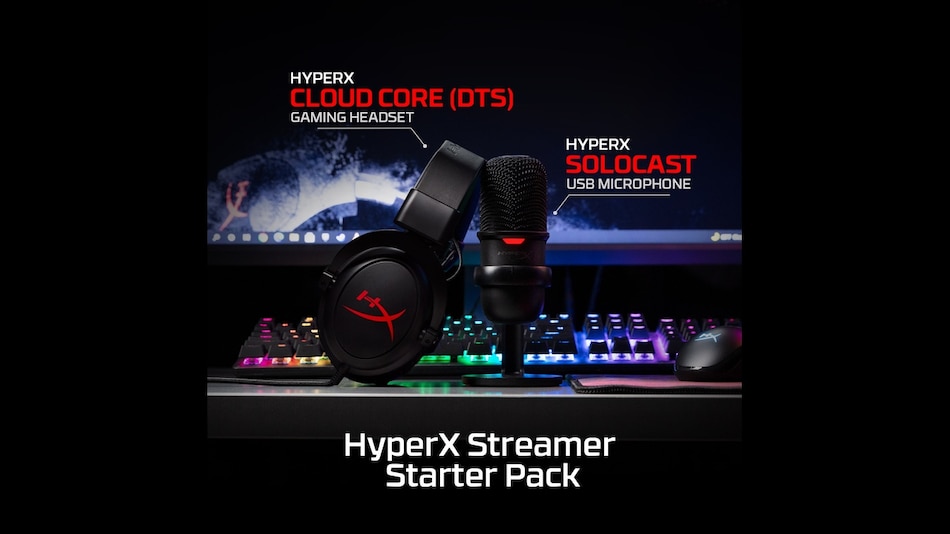 HyperX has announced a new Streamer Starter Pack that consists of HyperX Cloud Core gaming headset and HyperX SoloCast USB microphone. HyperX's new combo pack is aimed at gamers and content creators and is claimed to provide quality equipment at an affordable price. The HyperX Cloud Core gaming headset features DTS HeadphoneX: Spatial Audio. The HyperX SoloCast USB microphone has a tap-to-mute sensor at the top with an LED indicator and comes with a flexible and adjustable table stand.

The HyperX Streamer Starter Pack is priced at Rs. 11,490 and is exclusively available to purchase on Amazon. However, it is listed as "Currently Unavailable". As mentioned, the Streamer Starter Pack consists of HyperX Cloud Core gaming headset and the HyperX SoloCast USB microphone, both of which are offered in a sole Black colour option with Red accents.

The HyperX Cloud Core gaming headset features 53mm dynamic drivers. It also comes with DTS Headphone:X Spatial Audio with a two-year activation code that will deliver clear positional audio to enhance the gaming experience. The gaming headset has leatherette cushions with memory foam. Its outer body is constructed of aluminium.

The new gaming headset from HyperX has a frequency response range of 15Hz to 25,000Hz. It can handle a power output of up to 150mW. It can be connected via a 3.5mm headphone jack. The HyperX Cloud Core gaming headset measures 147x204x96mm and weighs 320 grams.

The other half of the HyperX Streamer Starter bundle is the HyperX SoloCast USB microphone that connects to a PC or a console using a USB 2.0 port. It can be connected to a PC running at least Windows 7 or MacOS. Alternatively, users can also connect it to a PlayStation 5 or PlayStation 4. The USB microphone has a frequency response range 20Hz to 20,000Hz and features an electret condenser microphone. The HyperX SoloCast USB microphone measures 174x97x78mm and weighs 261 grams. The stand itself weighs 125 grams and the whole unit — the microphone, stand, and the USB cable — weighs 429.9 grams.

Is Red Notice more (or less) than the sum of its leads: Dwayne Johnson, Ryan Reynolds, and Gal Gadot? We discuss this on Orbital, the Gadgets 360 podcast. Orbital is available on Spotify, Gaana, JioSaavn, Google Podcasts, Apple Podcasts, Amazon Music and wherever you get your podcasts.
Affiliate links may be automatically generated - see our ethics statement for details.