Honor Magic Earbuds are claimed to provide 3.5 hours of continuous music playback on a single charge. 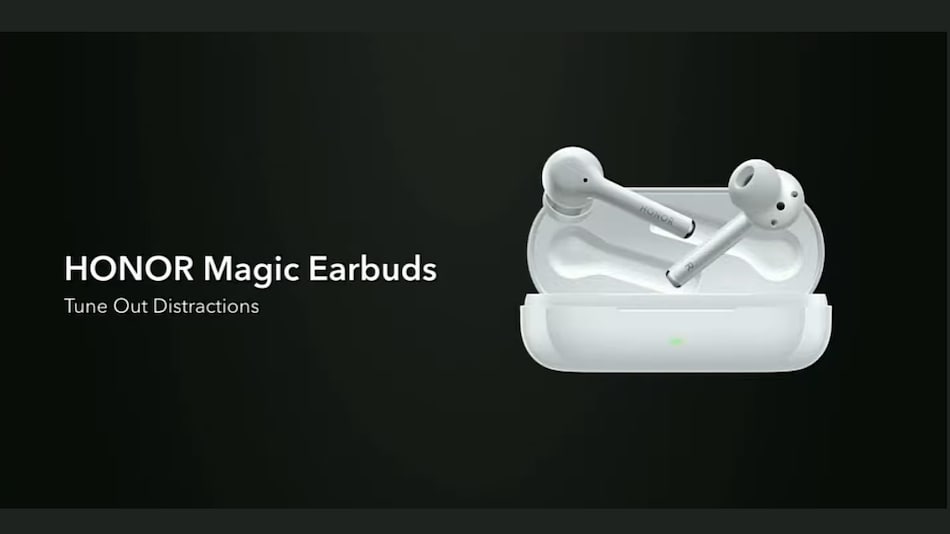 Honor launched a tonne of new consumer products at its All-Scenario Intelligence Conference, and one of them is the company's latest true wireless earbuds – the Honor Magic Earbuds. Honor says its new wireless earbuds offer impressive noise isolation, thanks to the proprietary Hybrid Active Noise Cancellation technology. The Honor Magic Earbuds feature a triple mic noise cancellation system to reduce the ambient noise and facilitate higher audio clarity for voice calls. Honor says that its latest audio offering can provide 3.5 hours of continuous music playback on a single charge, while the charging case adds another 13 hour worth of battery life.

The Honor Magic Earbuds feature what the company calls trapezoidal earbuds to provide a comfortable in-ear fit. They are up for grabs in two colours – Pearl White and Robin Egg Blue. As for the pricing, the Honor Magic Earbuds will set buyers back by EUR 129 (roughly Rs. 10,000) and will be available in April in multiple markets, including India.

The Honor offering packs built-in capacitive touch sensors on both earbuds, and they bring support for gestures such as double tap and press + hold. Talking about the hardware, the Honor Magic Earbuds have a triple mic noise cancellation system, with each earbud packing Micro-Electro-Mechanical System (MEMS) silicon microphones for reducing noise and improving voice clarity. At its heart, there is a 10mm driver unit. The earbuds weigh 5.4 grams, while the charging case tips the scales at 51 grams.

The new Honor true wireless stereo (TWS) earbuds pack a 37mAh battery that is claimed to last up to 3 hours of voice calls and 3.5 hours of continuous music playback. The charging case features a 410mAh battery and is tipped to add another 12 hour worth of voice call and 13 hours of music playback. It pairs over Bluetooth 5.0 and supports A2DP 1.3, HFP 1.6, and AVRCP 1.5 profiles. The rapid pairing feature allows the Honor Magic Earbuds to connect with a compatible phone as soon as the charging case is opened.